Lets get the basics out of the way first; Brakes are important. If you're not confident changing stuff, get a proffessional to do it.
On the flip side, I'd sooner do things like brakes myself as I want to know their done right - Proffesional mechanics are always hard to find in the uk.

What I'd recommend: (do it once, do it right)
Reconditioned calipers
Brake pads
Brake discs
Handbrake cables.

So, to begin, jack and support the rear of the car, remove the roadwheels and you'll find something like this.

Have a good look around to see exactly what you're dealing with. Its a good time to start spraying your penetrating oil on stuff. 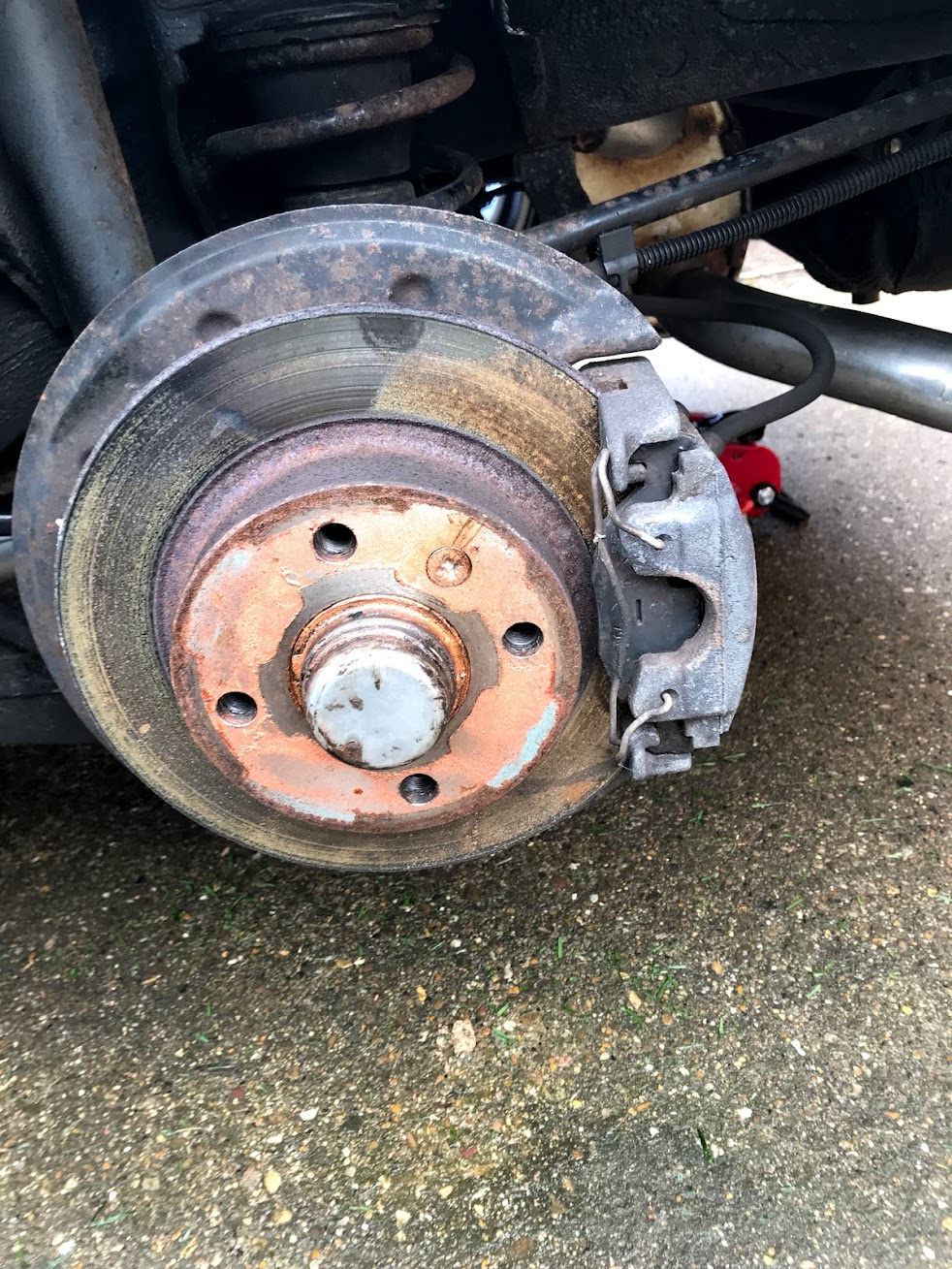 If you're changing discs, Undo the retaining screw in the middle of the disc - It shouldn't be super tight, but you don't know who's been there before you. 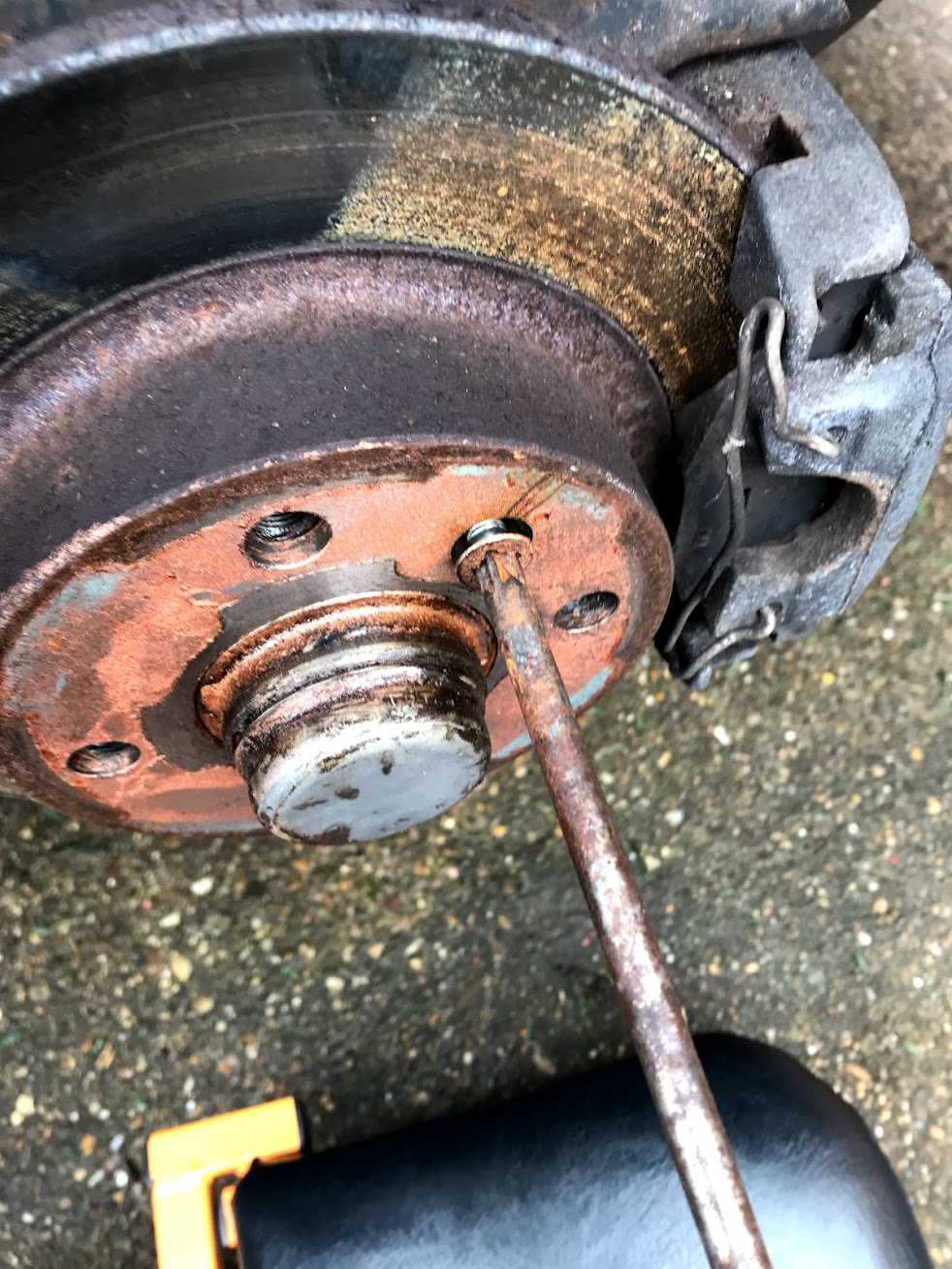 If you're not swapping the caliper out, you'll need to reset the parking brake mechanism.

Remove the cover from the adjuster and then using a large screwdriver between the outer pad and brake carrier, appply gentle, but constant pressure, whilst turning the brake adjuster anti-clockerwise with 4mm allen key until no more resistence is felt.

Next pop off the plastic caps on the sliders and undo using a 7mm allen key. If these are tight, you can use a ring spanner over the end of the allen key to give you leverage. 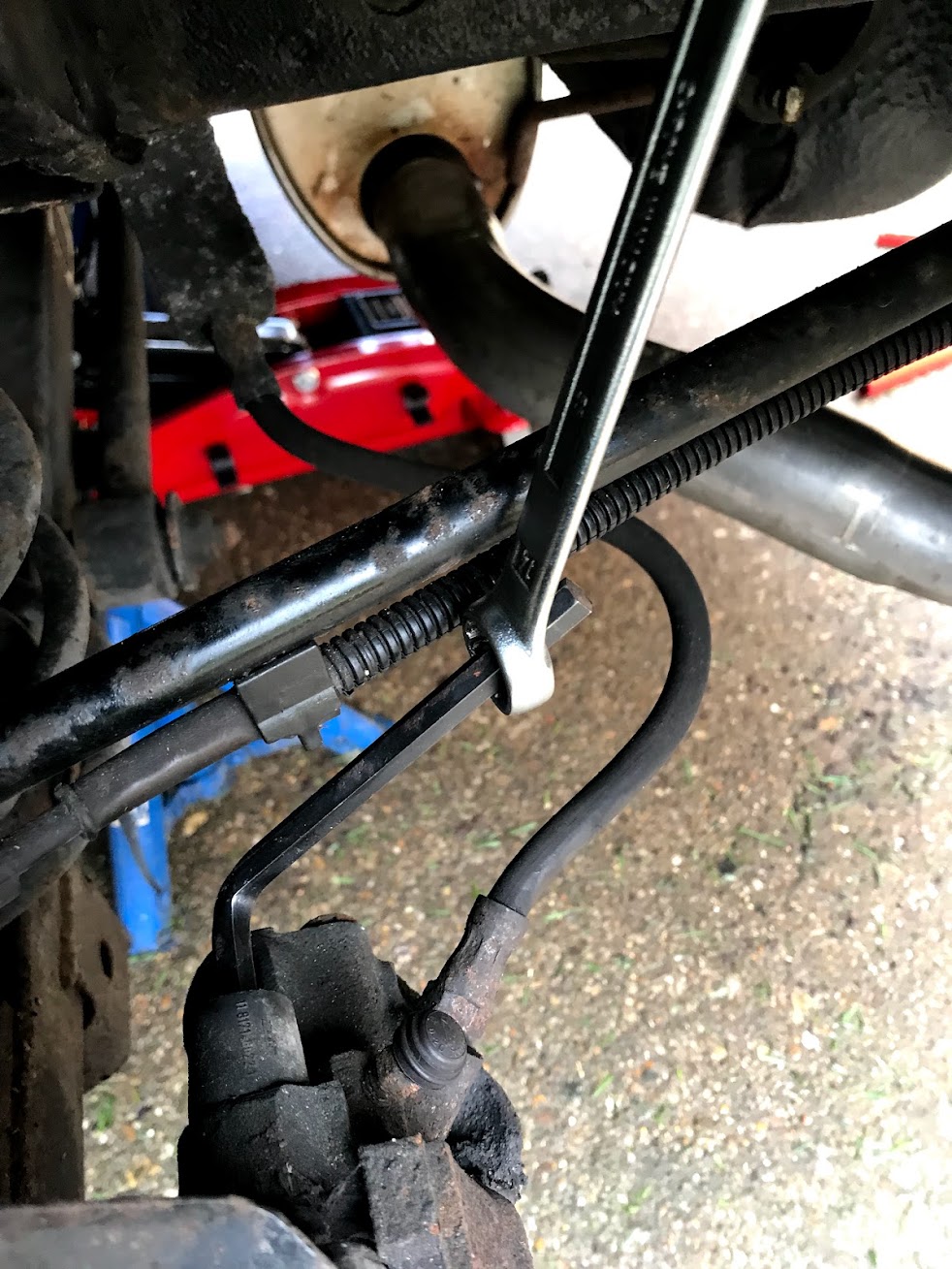 After removing the spring clip, you should now be able to wiggle the caliper free.

If we're changing discs, we need the caliper carrier off too - 14mm bolts and likely to be swearing induced tight. 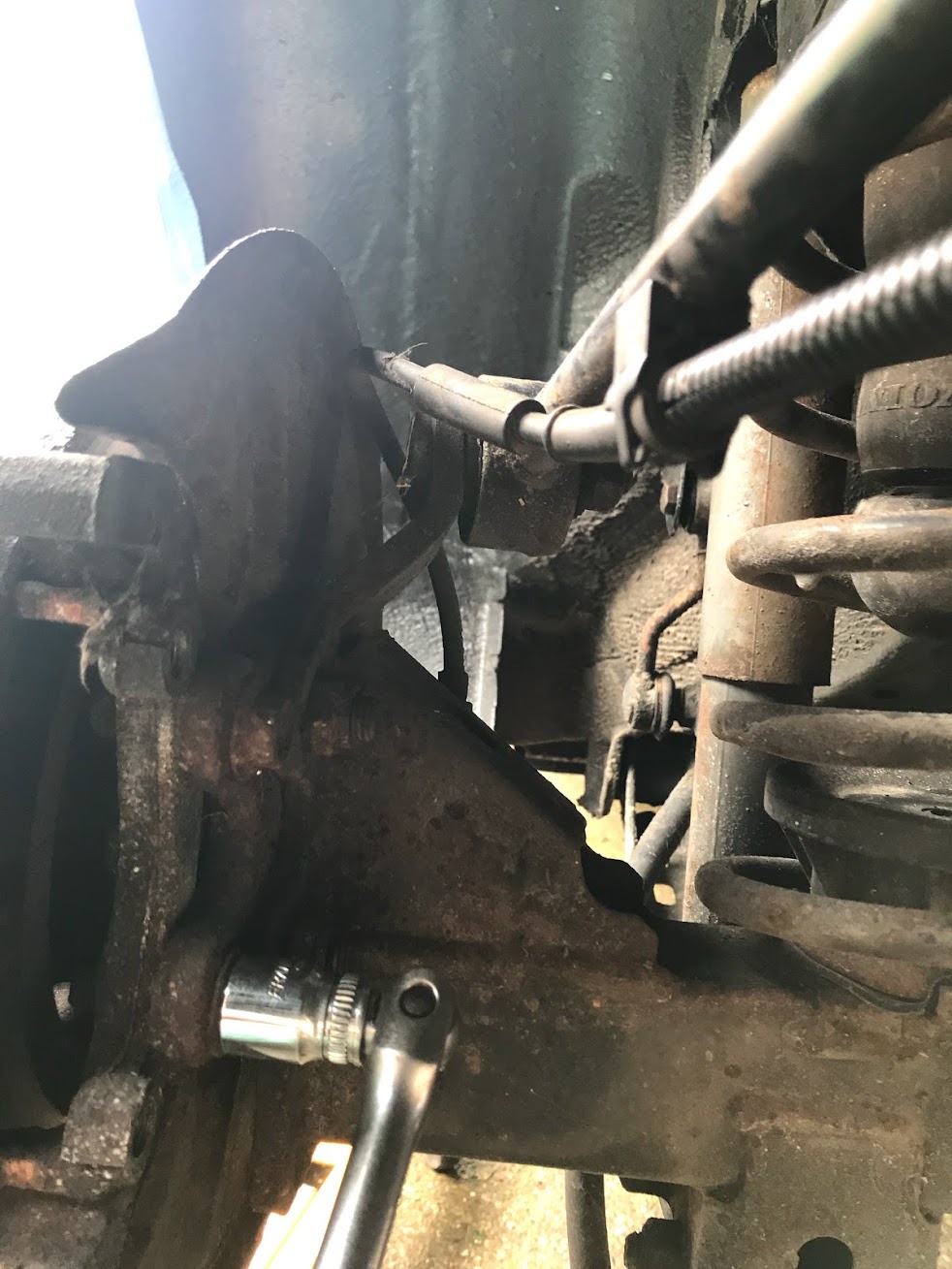 With the carrier off, the disc will come off easily.

Clean everything up thoroughly. New discs come with a protection coating that needs cleaning off. 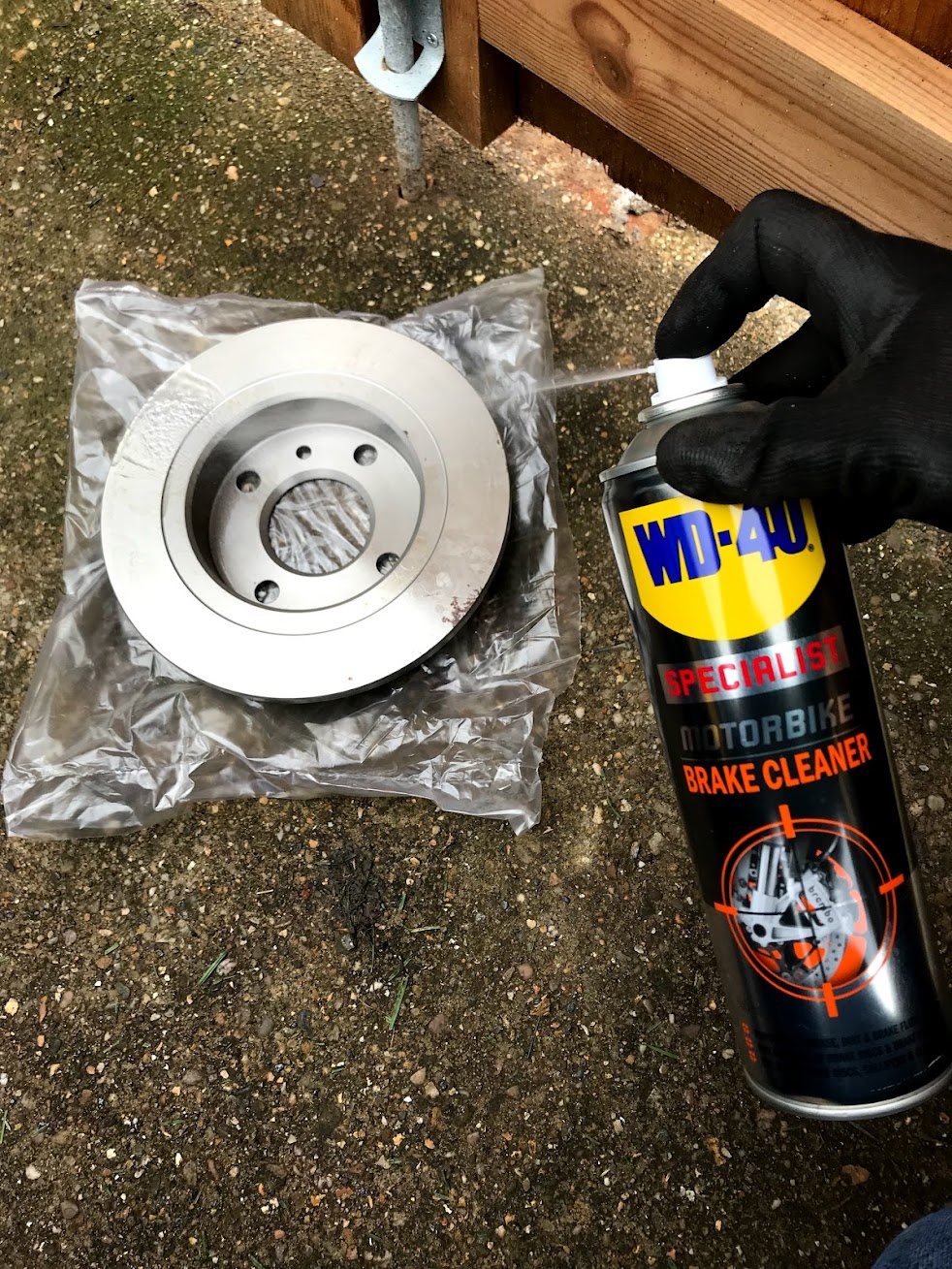 The carriers should be wire brushed, with particular attention paid to where the pads seat. 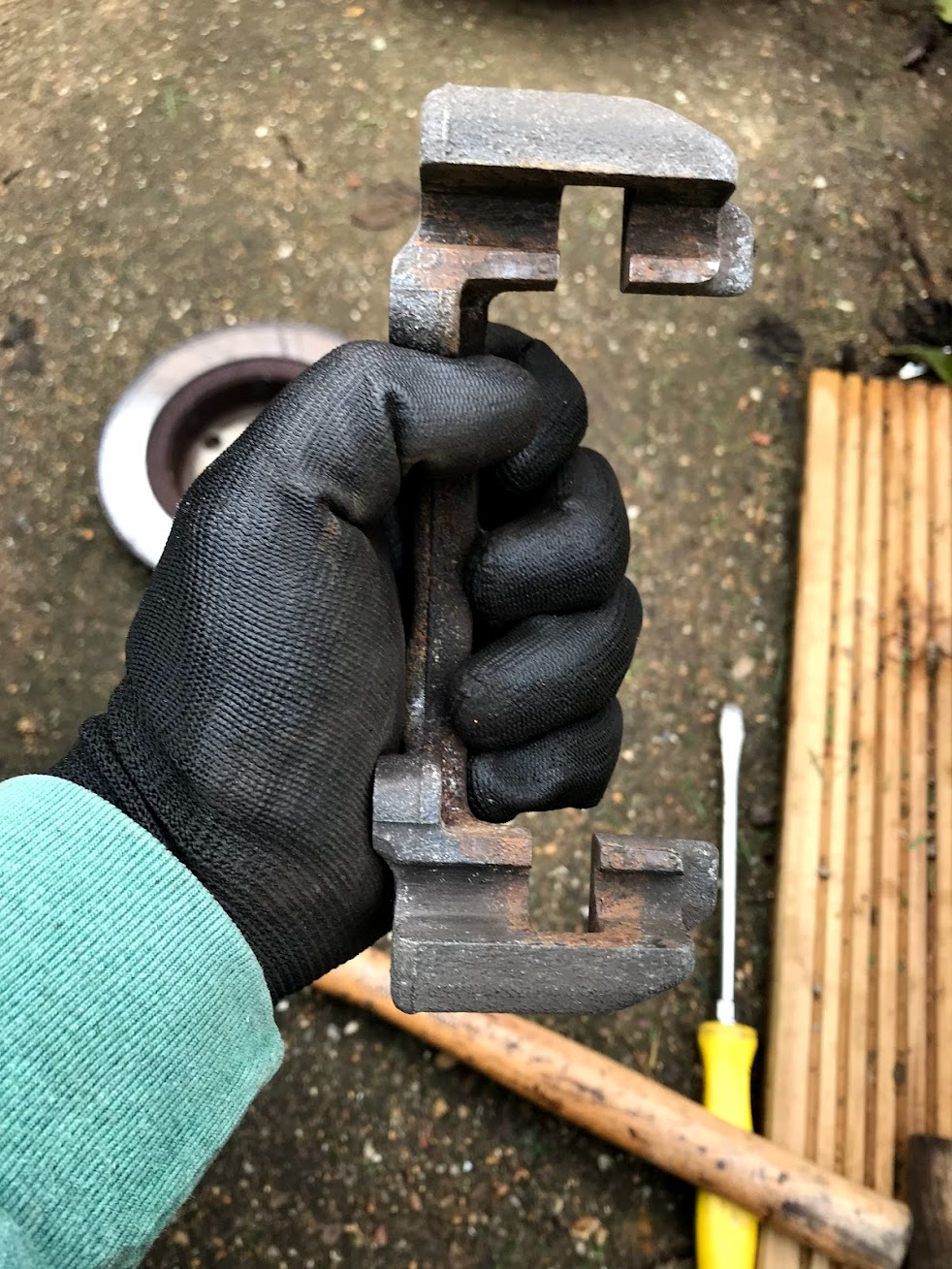 All bolts should be wire brushed of rust.

If your swapping the caliper, Pop the handbrake cable off and clamp the brake hose. If you've not got a proper brake hose clamp, a pair of mole grips clamping a peice of cloth will suffice.

Compare the new and old calipers (yes, they're handed) and thread the caliper onto the hose fitted. 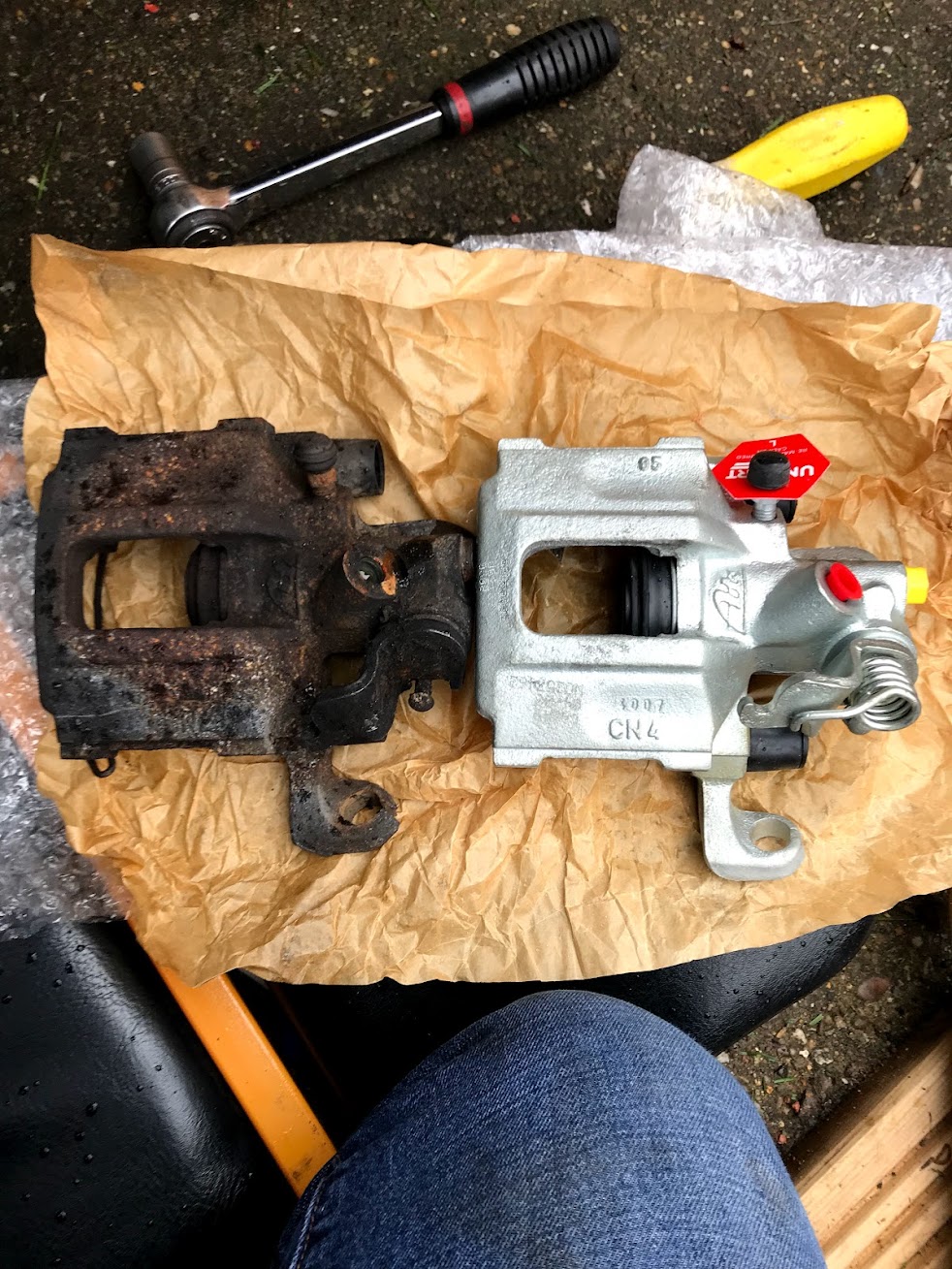 Everything is now the reversal of removal, but with the following observations.

If it was tight coming off, grease it. The carrier bolts have locking washers machined in the head, so a blob of copper slip on the end of the bolt will make the job a lot easier next time. 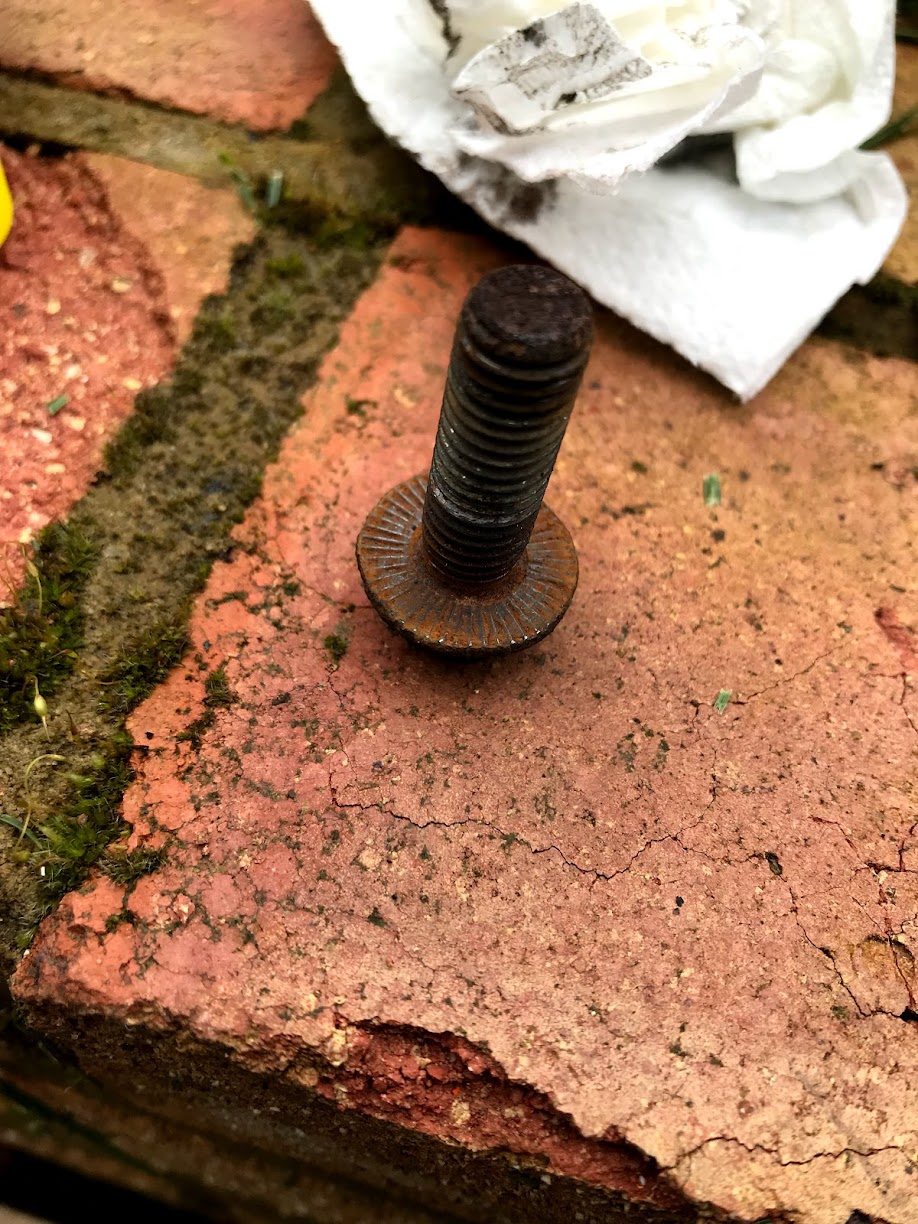 The sliders should be coated with red rubber grease; You can pick up small tubes (enough to do the job) for pence from eBay, or be like me, and have a whopping great big tub of it that will last me forever for a couple of pounds more.

If we've swapped the caliper, it's going to need bleeding.

then we need to adjust the handbrake:

The handbrake cable adjuster is actually only there to account for cable stretch - NOT pad wear. Once the cable is 'stretched in' it actually wont stretch that much more in it's lifetime.

If you use the central adjust to "improve" the handbrake, you may end up with the handbrake lever arms at the caliper at an angle which is past the point of mechanical advantage.

Let off the handbrake cables at the adjuster underneath the middle of the car so that both caliper levers are OFF against their stops. I tend to wind the adjuster right to the end of the stop, just to be sure.

You then need to remove the 'bungs' on the backs of both calipers. Once the bungs are removed you will a 4mm allen key to adjust the calipers. To do this you need to wind the adjuster clockwise until it locks the brake on. Then back it off until you can just turn the disc, then back off another quarter of a turn - this will allow for expansion when hot. 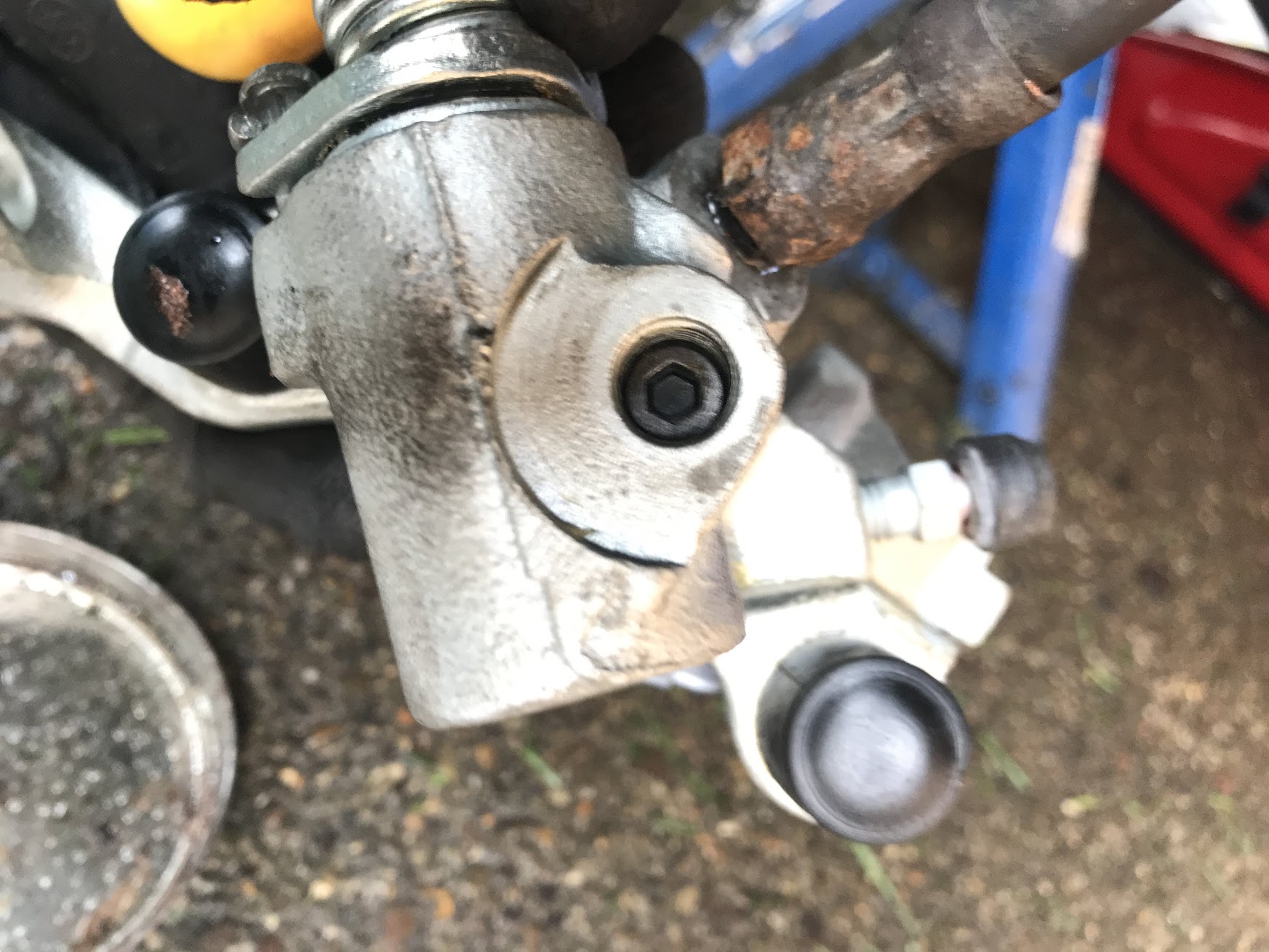 Once you have done this adjustment pump the brake pedal half a dozen times then see what handbrake lever travel you have. if this is too much you will need to adjust the previously slackened cable adjustment. I aim for 5 to 6 notches fully locked on. You don't want the lever to be able to reach the end of it's travel (this is a reason to fail an MOT - "no reserve travel") but equally, if it comes up 2 notches, your cables are probably already pulling the handbrake levers on, giving you binding rear brakes (another MOT failure).
Top

A good how to.

Just to confirm, is the adjuster in the middle of the car under the handbrake for cable stretch adjustment and the adjusters in the callipers for pad wear?

Not sure all new brake discs are supposed to have the protective coating cleaned off, the ones I brought for the rear specifically stated “Do not remove coating”. Not looked into it so could be completely wrong but my theory is it helps to keep the parts of the disc not touching the pads from rusting.

Central adjuster is for stretch adjustment.
Calipers for Pad wear.

BUT.... you have to get both right. It's easy to overcompensate one or the other.
Biggest tip is this: If you've adjusted the central adjuster and the handbrake levers on the calipers have moved from their fully off position, something is wrong.

Discs are normally packed with an oily residue and sealed into bags to prevent them from rusting whilst stored; You got a picture of yours? I've seen some where the disc is painted with a protective coating that stops the bell/unused braking area from rusting. Is this the sort you have?
Top

great write up, one picture I can't see.

EDIT now I can

BUT you can wriggle the disc off with the caliper holder in place, take a few thou off the inner corners with a file and it will just wiggle free, you might need to file a few extra thou to get the new thicker disc back on.

just saves an awful lot of work if the caliper holder is OK, and in my case there are no obvious corners to the retaining bolts, so they would have to be chopped off with the angle grinder

same as i had to do with the front holders cos they are chuffing tight with the self welding/securing heads (as second last picture). I replaced the front ones with high tensile Allen bolts 10.8 minimum!!! and put a plastic plug with loads of grease into socket end so I can get them off again

Central adjuster is for stretch adjustment.
Calipers for Pad wear.

BUT.... you have to get both right. It's easy to overcompensate one or the other.

That is useful to know for when my car goes back together. The rears got put back on but as the fronts were coming off and I wasn’t sure exactly how the two different adjusters interacted proper adjustment was left.

jifflemon wrote: ↑
Sun Apr 08, 2018 6:03 pm
Discs are normally packed with an oily residue and sealed into bags to prevent them from rusting whilst stored; You got a picture of yours? I've seen some where the disc is painted with a protective coating that stops the bell/unused braking area from rusting. Is this the sort you have?

Can’t remember what the fronts were (think they may have been genuine Volvo) was done when I first got the car and it was in daily use. I was about to clean the rears (not genuine) then noticed the “Do not remove coating” on the packaging.

As you can see it was a paint rather than an oily coating.

Can you all stop adding shiny things to your car that, in return, make me want to add shiny things to mine?!
1993 Turbo auto called Skip for the important stuff
2011 Juke 190 for everything else
Top
Post Reply
6 posts • Page 1 of 1