Taking advantage of a free afternoon, I decided to upgrade the window switches on my 480 and illuminate them.

I had a pair of switches from a Volvo 440, but after a closer inspection it turns out that these are slightly different. Volvo 440/460 does not have the "fancy features" of automatic opening of the driver's window and automatic window closing with a door key. Especially the first feature is very useful, so I did not want to sacrifice it. The electrical circuit controlling windows in 440/460 is much simpler, as it does not involve anything like the CEM. One pin of the switch always gets +12V power supply, then another two pins are ground, and another two go to the window motor. Then the switch just applies the current in one or the other direction. The LED illuminating the switch is connected between pins 4 (+) and 5 (-).

In the 480, the circuit is much more complicated, because due to the "fancy features", the current must flow through the switch even if it is not pressed. Moreover, it must flow in one (automatic opening) or the other direction (closing with a key). Also, CEM3 monitors if the driver-side switch is pressed to engage the automatic opening when needed. Due to these differences, on the driver-side, sometimes pins 3 and 5 are the ground, but sometimes they supply the power. This is the reason why simply plugging 440 switch into 480 does not work. 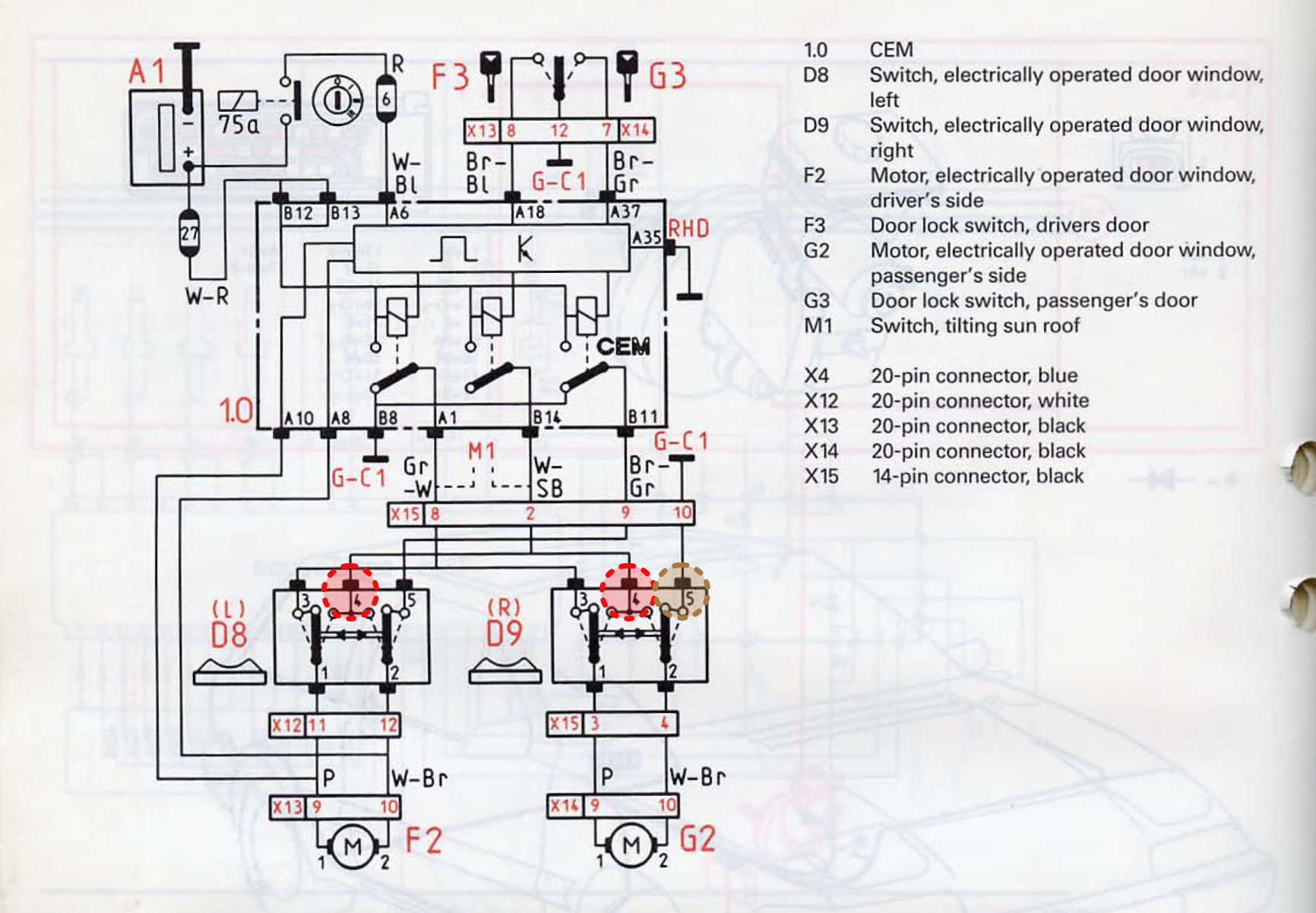 To solve this, I created a little hybrid switch by taking parts of the switch from a 440 and the base from a 480. The idea is to use pin 4 as a power supply (like in the 440), since this is always positive 12V. The ground can be found on the passenger-side pin 5.

The next step is to the disassemble the switches. These are fortunately not as fragile as the panel. From the 440 switch, you will need two elements: the LED and the part that you press (this has a translucent icon of a window). Just cut the LED off (saving as much of the wire as possible).

The 480 switch has a dedicated place to mount the LED. Additionally, pin 4, which will supply power, has a small tab pointing up that can be used to solder one leg of the LED (red circle in the photo below). Don't switch the legs of the LED, because it will not illuminate if it's installed reversed. 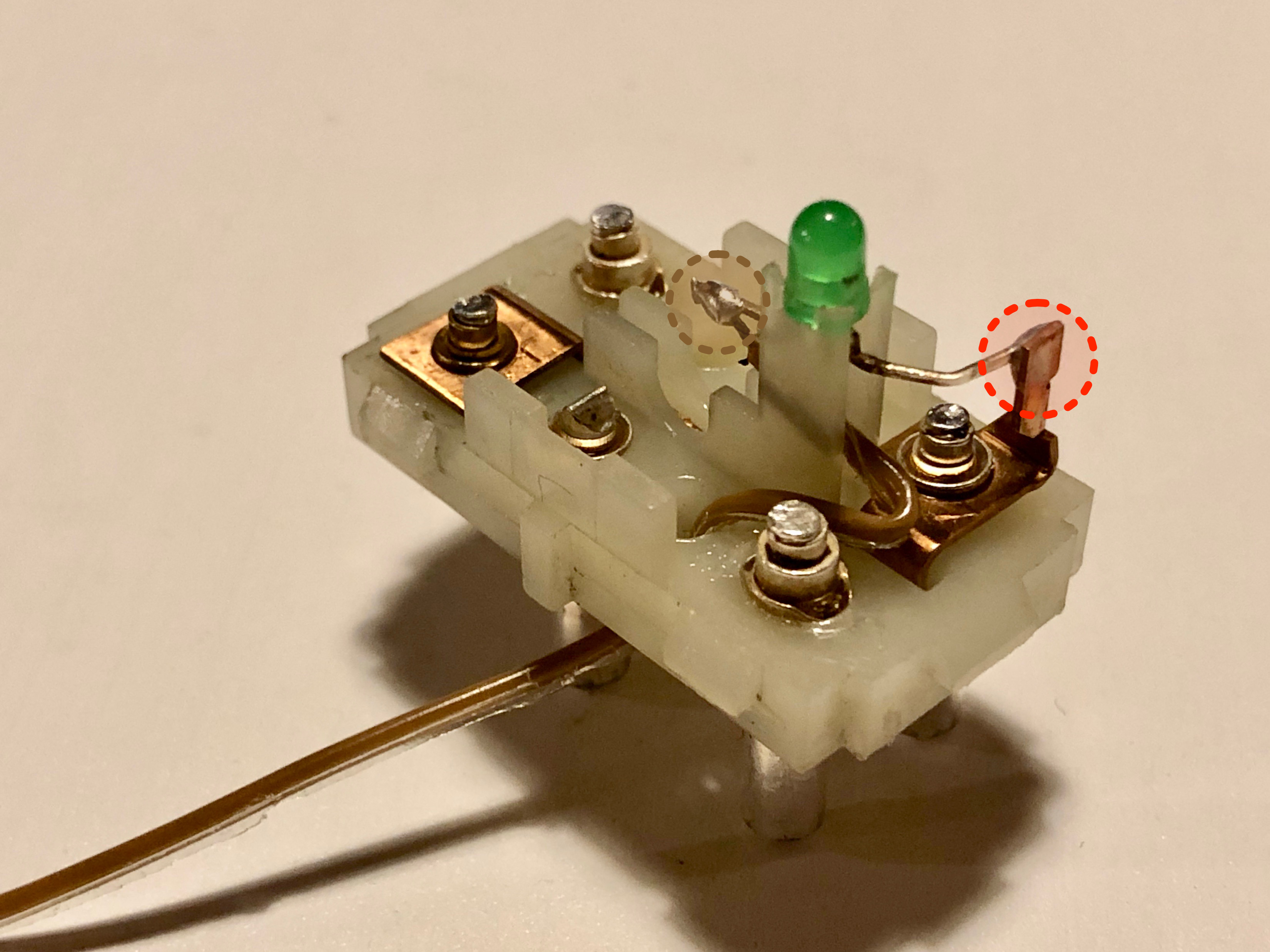 The other leg of the LED (brown circle) must go to a constant ground, which is not present in the driver-side switch. To solve this, I drilled a small hole in the base of the switch (between pins 1 and 3) and I routed a thin ground wire through there. 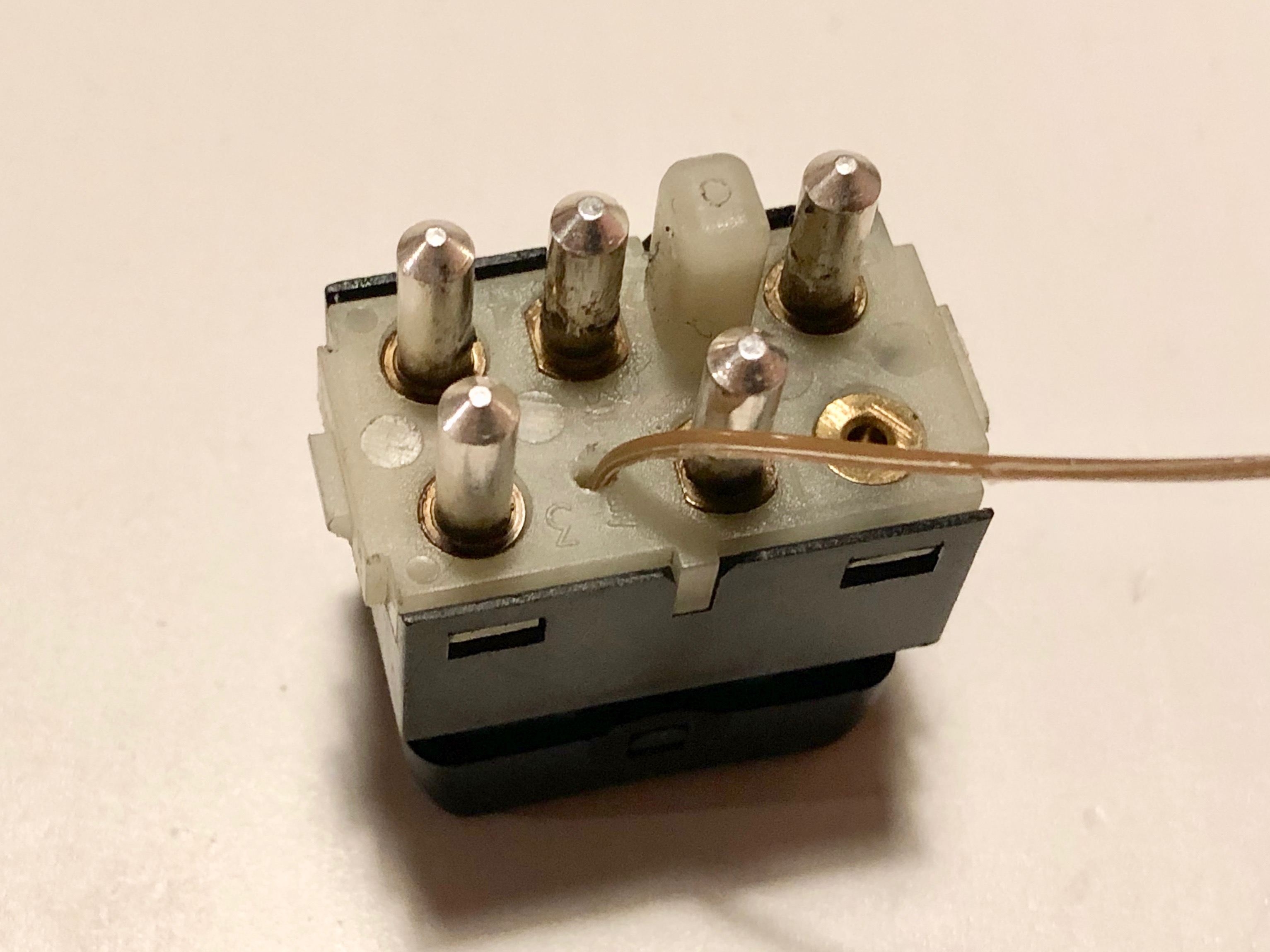 One thing to keep in mind is that the wire must be routed in a way that will not interfere with the movable parts of the switch: 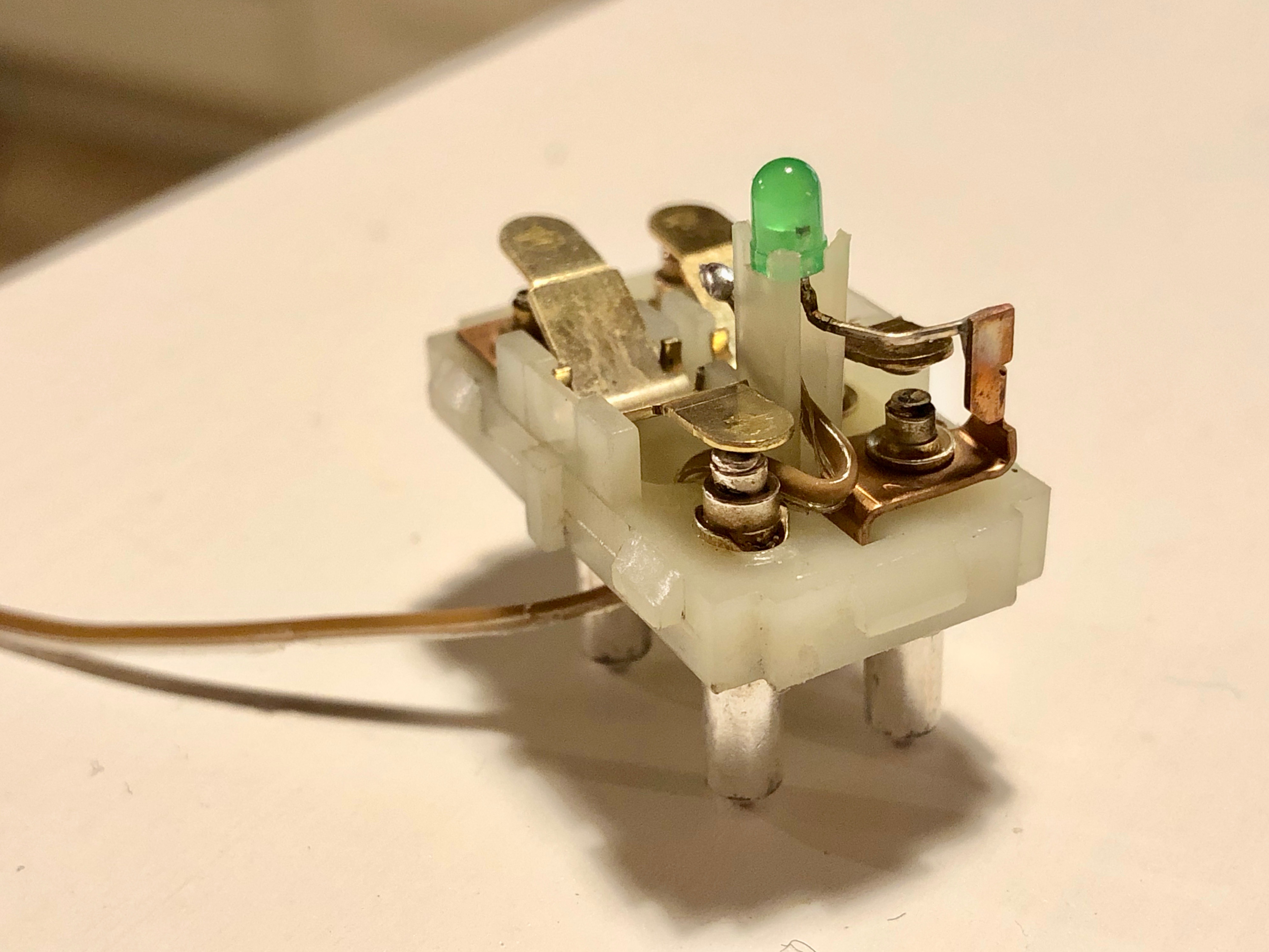 The wire I used was very thin, so the easiest way to ground it, was to simply slide it into the connector for pin 5 on the passenger side. In this way, I can disconnect it easily if I ever need to remove the switch. 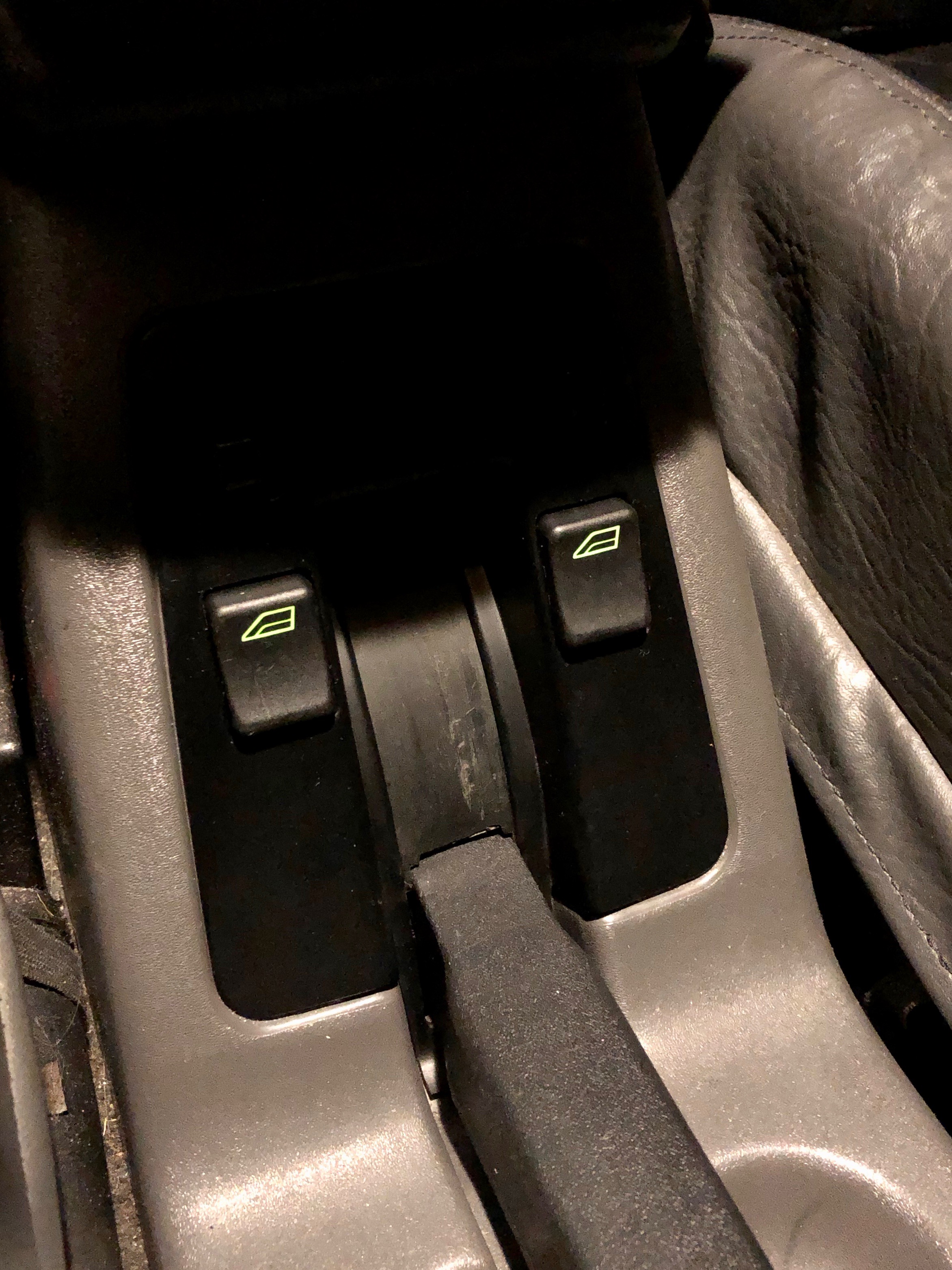 CEM provides power to the windows (i.e. to the switch also) for about 15 minutes after turning off the engine. Therefore, don't be scared if your buttons are illuminated even after closing the car. They will eventually turn off

Love this for two reasons....

Can't help wondering if you are going about it in a more complicated way than is necessary though?

I decided the simplest way was to make the 440 switch identical to the 480 one - I pushed out a pin from one of my many spare switches and inserted it into the correct hole in the 440 switch, thereby making the right number of pins. I then carefully cut away the copper connection that is not present on the 480 switch.

I did this with 2 switches, then put them in the car - worked fine with full functionality.

Perhaps it can be done simpler

I wasn’t sure how to remove/add pins without damaging the base, so I decided to move the LED instead

I guess that your solution gives the same result apart from turning off the LED while the window is going down automatically (minor difference).
Top

I wasn’t sure how to remove/add pins without damaging the base, so I decided to move the LED instead

I guess that your solution gives the same result apart from turning off the LED while the window is going down automatically (minor difference).

You are quite right, I hadn't noticed the LED went off when doing an auto down!

Please rest assured - I wasn't in any way criticising what you have done: clearly you have done the job truly properly!