jamescarruthers wrote: ↑
Tue May 04, 2021 9:51 am
This forum is a nightmare when including images. I end up doing only one or two pictures. Some people manage loads (JKM) but I have no idea how they do it!

A lot depends on who hosts the image; I use google pictures, but it's not exactly straightforward. Photobucket used to be amazing, but killed all the forums when they switched to their ludicrously priced service plans....

Rob, have you tried posting without the URL link? Just post the IMG tags. I know Edie suffered for a while trying to post images; the server sees some URL's/posts as hostile and so restricts you for a short period of time as a defensive system.
Top

I'm hosting from Flickr - trying with ditching the URL tag and it seems to be working better. Thanks for the help! Now see a crusty Volvo becoming and uncrusty Volvo. Unfortunately no action shots because I just paid someone to do this job. 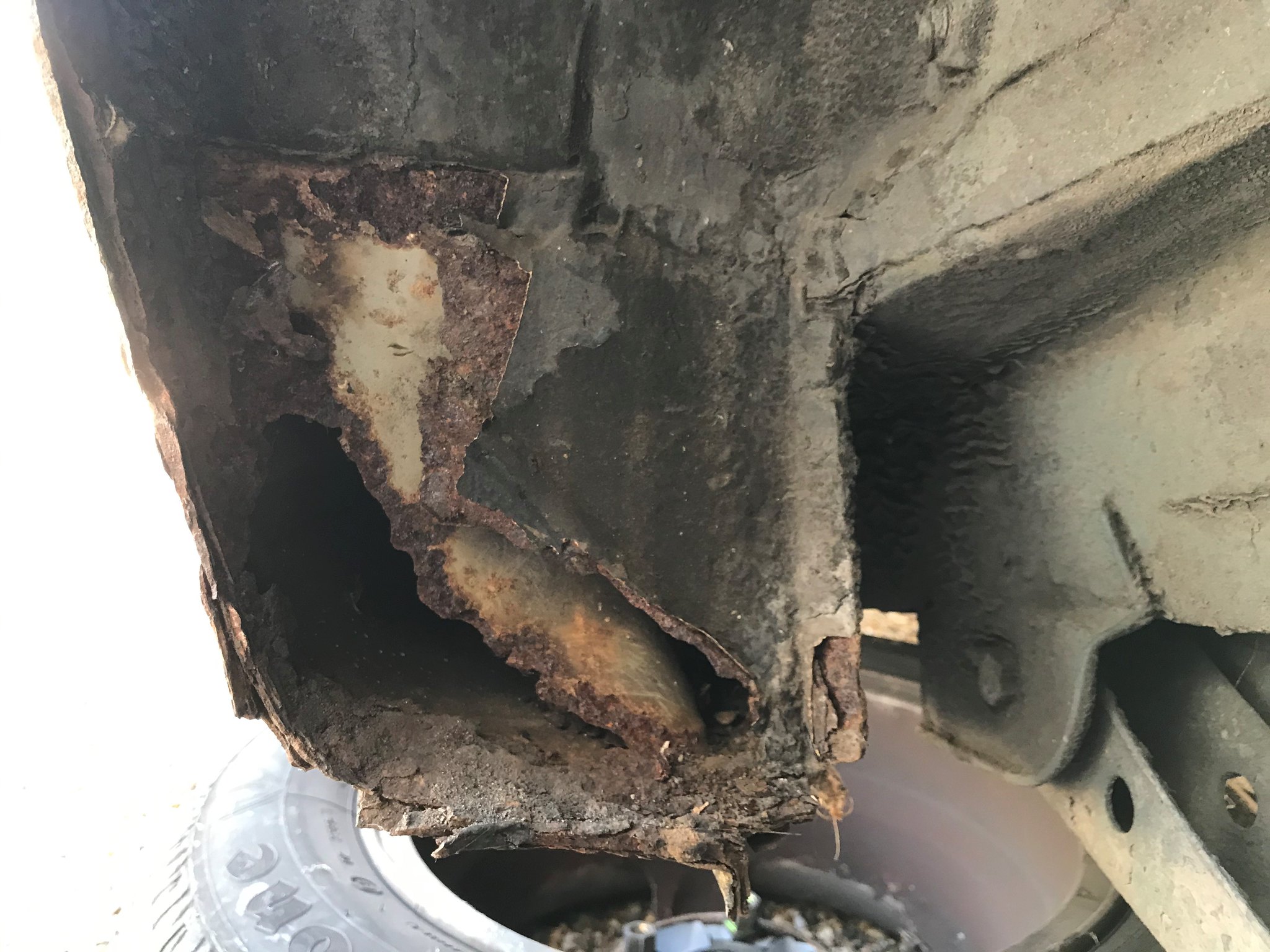 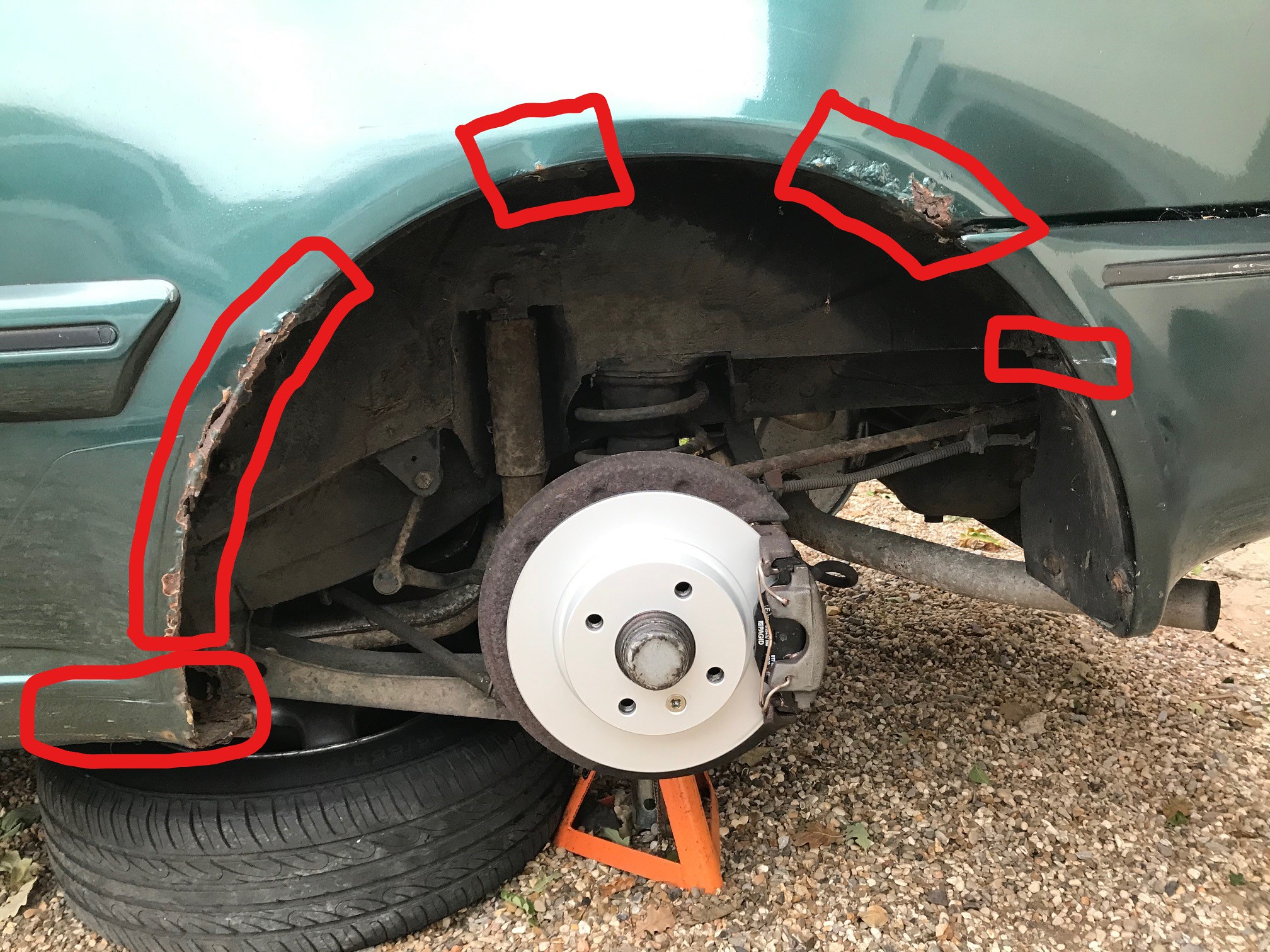 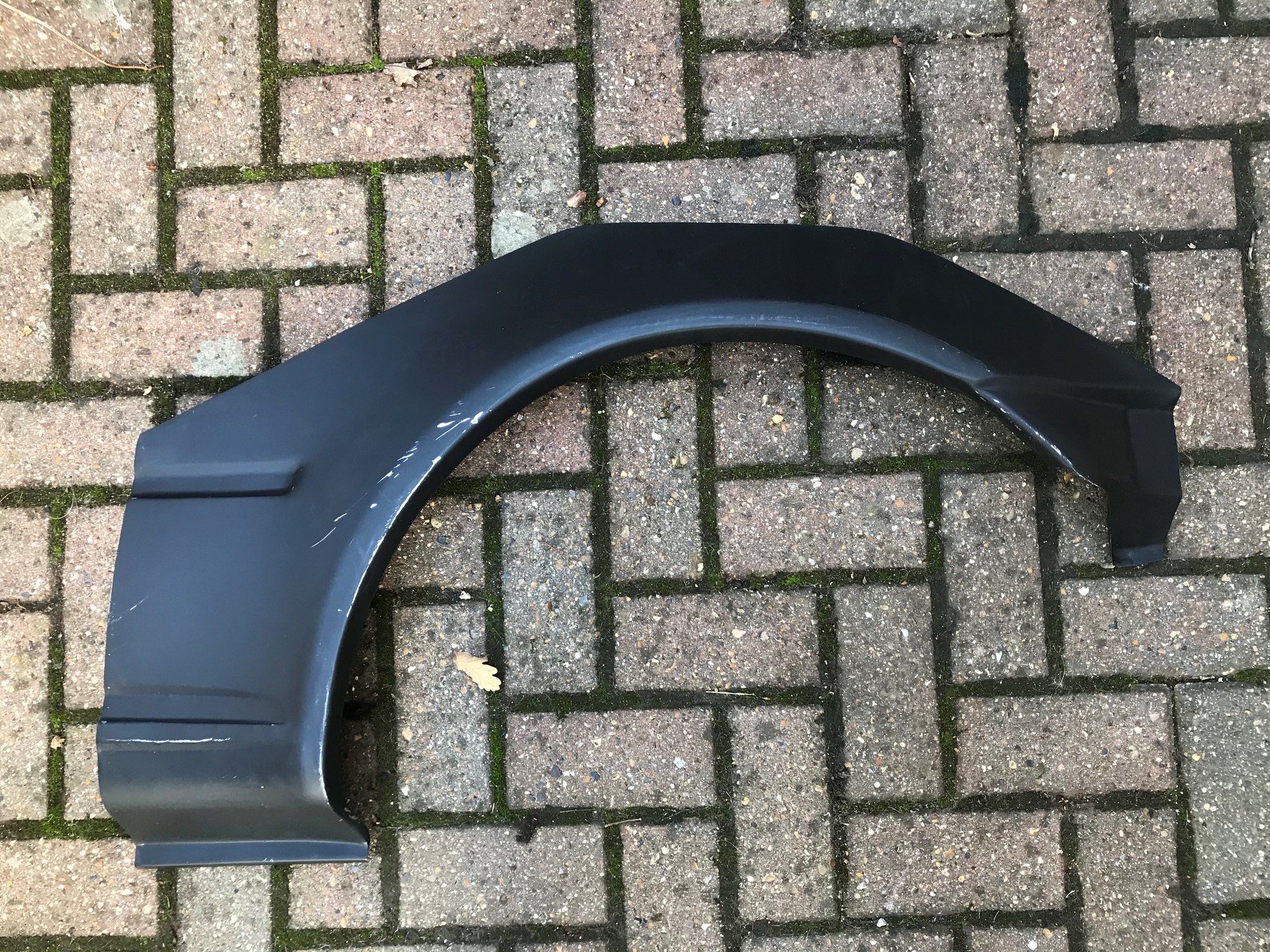 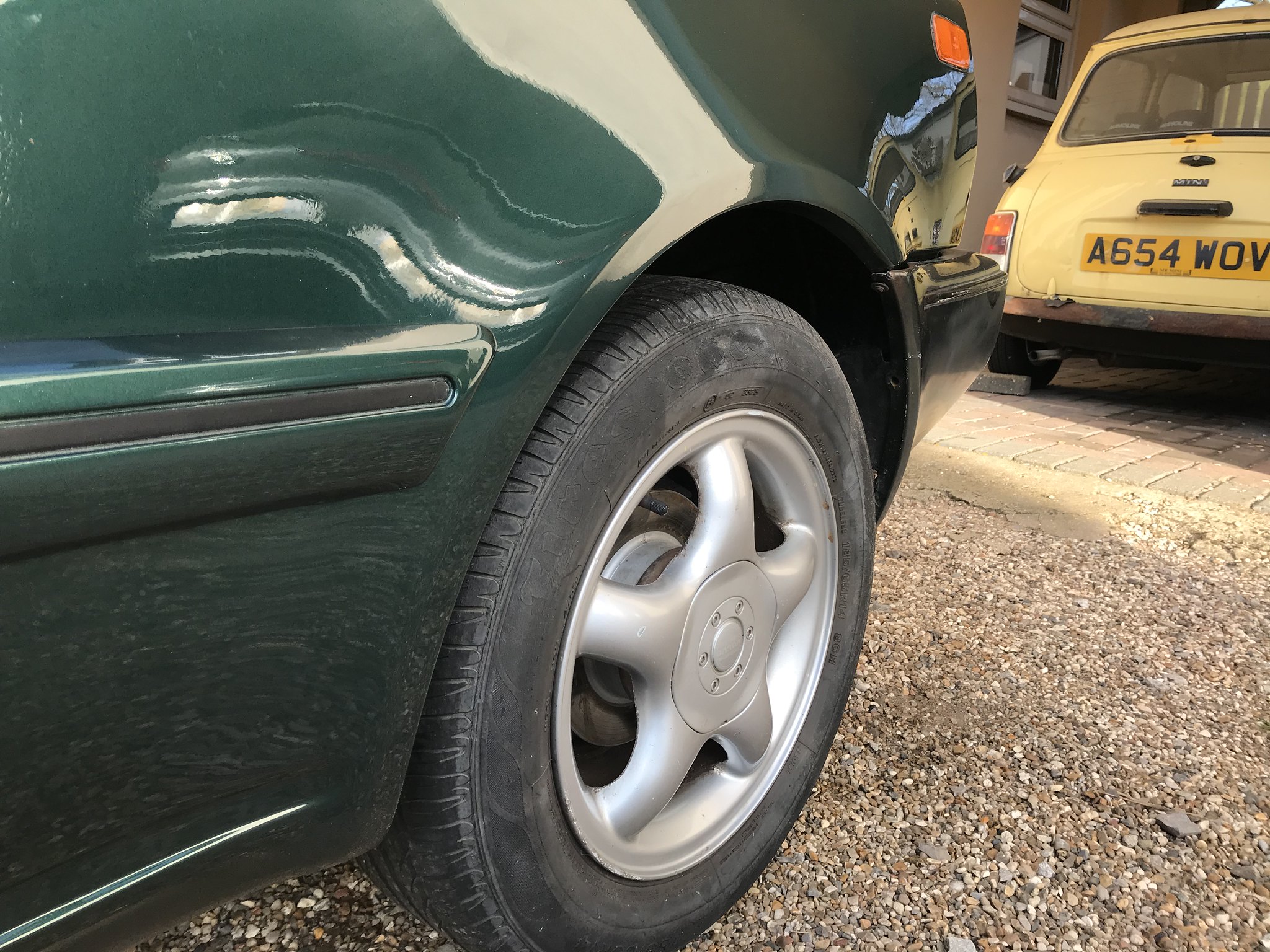 Rob, have you tried posting without the URL link? Just post the IMG tags. I know Edie suffered for a while trying to post images; the server sees some URL's/posts as hostile and so restricts you for a short period of time as a defensive system.

Good tip! I will try without the URL in the future. I have some good pics coming up soon!

Rob88h wrote: ↑
Tue May 04, 2021 10:05 am
I'm hosting from Flickr - trying with ditching the URL tag and it seems to be working better. Thanks for the help! Now see a crusty Volvo becoming and uncrusty Volvo. Unfortunately no action shots because I just paid someone to do this job.

THAT is stunning work!

It really pleases me to see people NOT shying away from tackling bodywork, even if it means farming the work out.

Get busy with some Bilt Hamber S50 now!
Top

There's an old Used Car Sales sticker in the back window, and because I are Nerd I took it on a 650 mile round trip to visit.
Being a Bank Holiday Sunday it was closed. 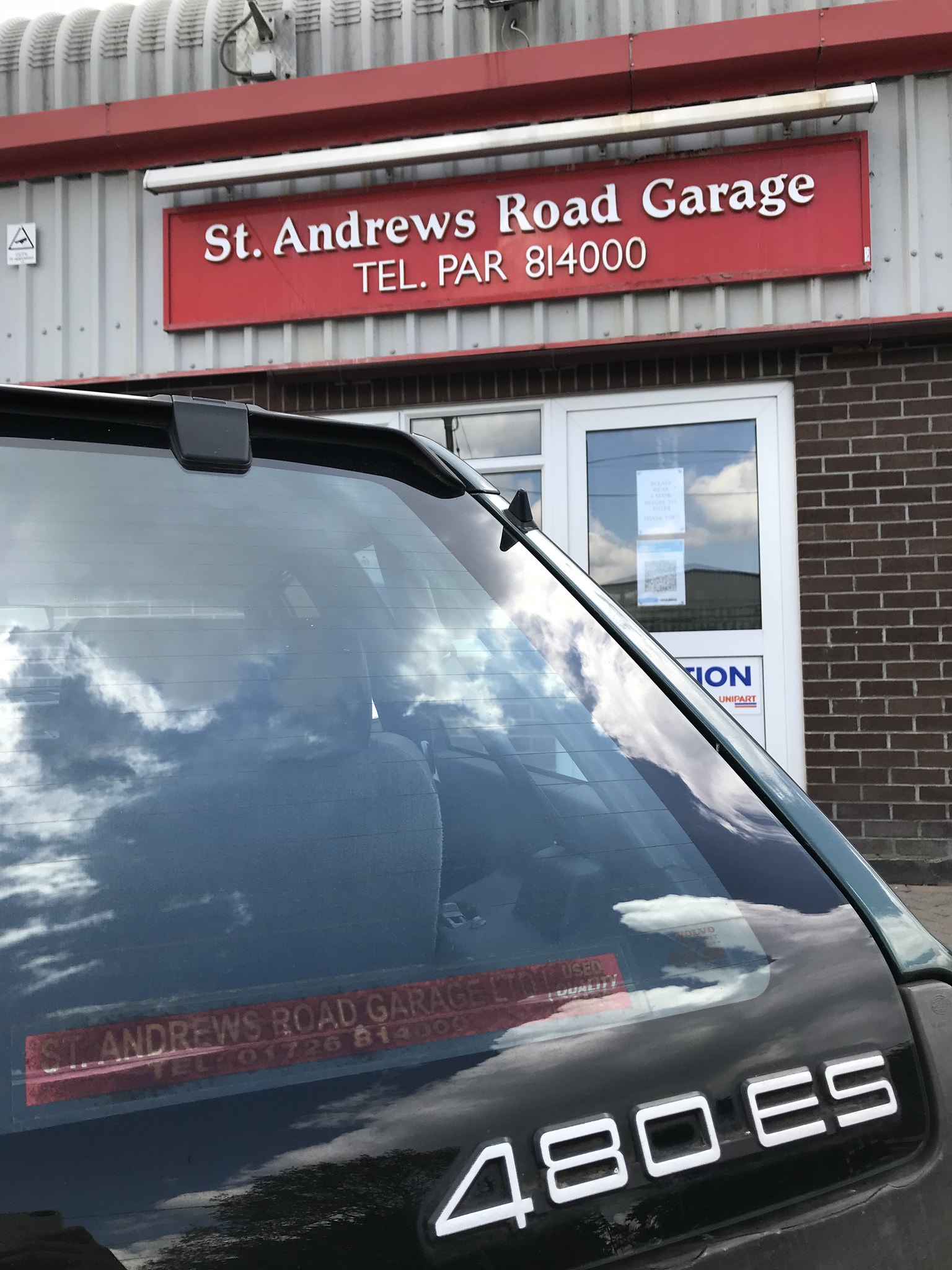 *Yes, my rear lights are cracked on the top.
Top

Are those Skandix arches? Did you do inner as well as outer panels too? Am thinking about biting the bullet on Nilani, even though she flew through her MOT with no advisories - it would bring her up to a very good standard overall, once the paintwork was sorted. I'd love to have a rear end as fine as that, which didn't belong to the missus


Rob88h wrote: ↑
Tue May 04, 2021 10:05 am
I'm hosting from Flickr - trying with ditching the URL tag and it seems to be working better. Thanks for the help! Now see a crusty Volvo becoming and uncrusty Volvo. Unfortunately no action shots because I just paid someone to do this job.

Huge respect for smashing a huge stumbling block that many fail to conquer... welding & paint. It is financial suicide, so well done!

Rob88h wrote: ↑
Tue May 04, 2021 9:41 am
It was also the decision point for the “not-for-profit” approach to buying this 480 and keeping it alive. I get a lot of satisfaction trying to secure a cars future for a bit longer, and I have few enough RL responsibilities meaning I can bury my head in the sand a bit when it comes to the economics of it.

Shame about St. Andrews Garage being closed. You could of complained about the corrosion and seen if they'd offer a goodwill gesture

All nerd activities actively encouraged. So many small selling garages (and small main dealers) of say 20+ years ago have been demolished for "executive" homes.

Hi Martin, yes Skandix. They're a pretty reasonable price in my opinion - it's just a blessing they're available, get them while you can! I've had other cars that were a nightmare to repair because of panel availability.
In my case I only used the Skandix stuff for the external and the bodyshop fabricated the bits they needed for the inner arch lip and wheel well repairs, although IIRC sectioned inner arches and sill caps (rear) are also available from Skandix too. 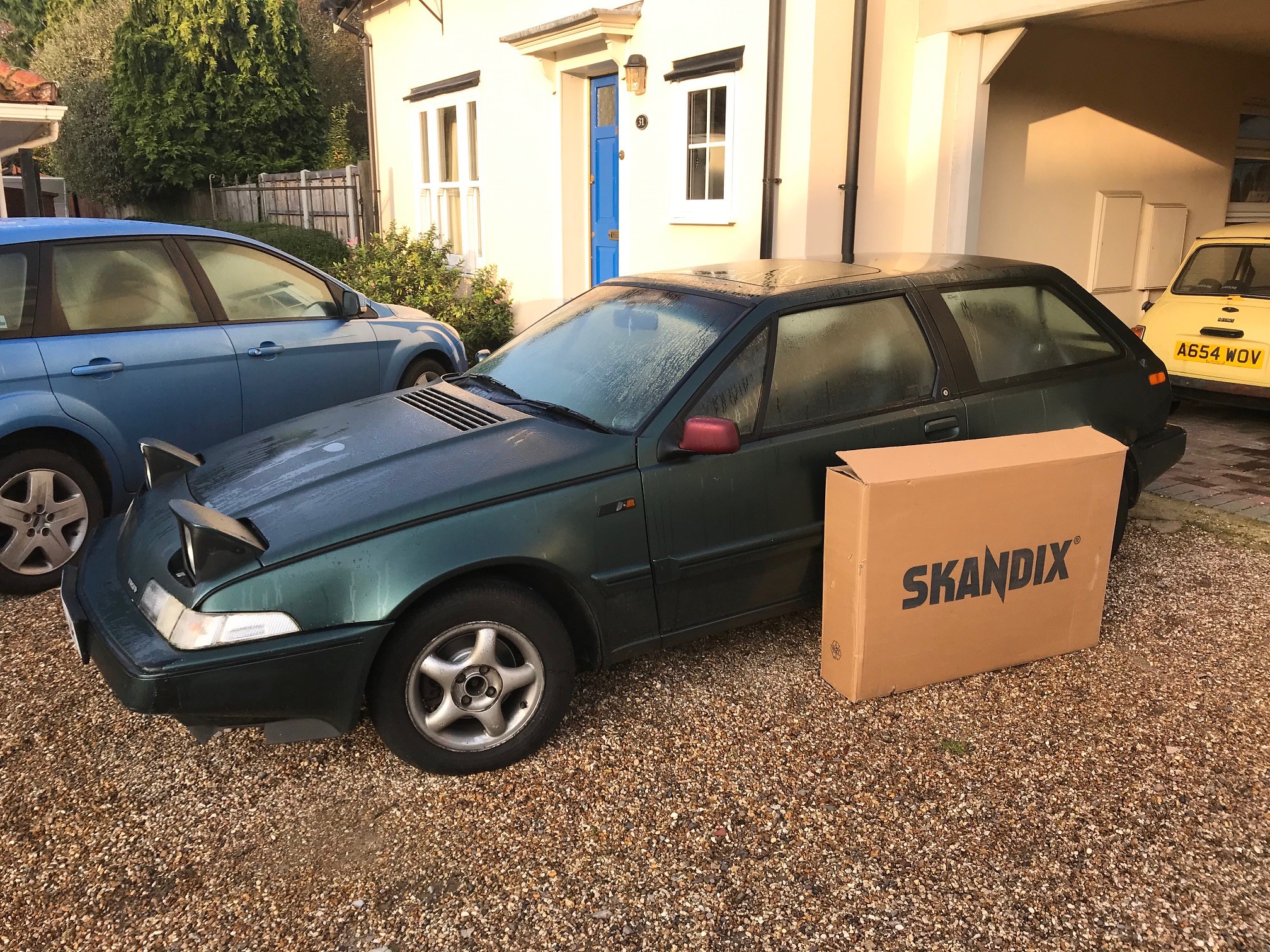 Poppy uppies. When I purchased M_AAF back in August only one light was functioning. Apparently the other one had worked and it just wasn’t working on the day I turned up – yeah right – to wind it up I had to get it going with Mole grips and a sock (to protect my splines of course). It went with a bang and clearly hadn’t been functional for a while. 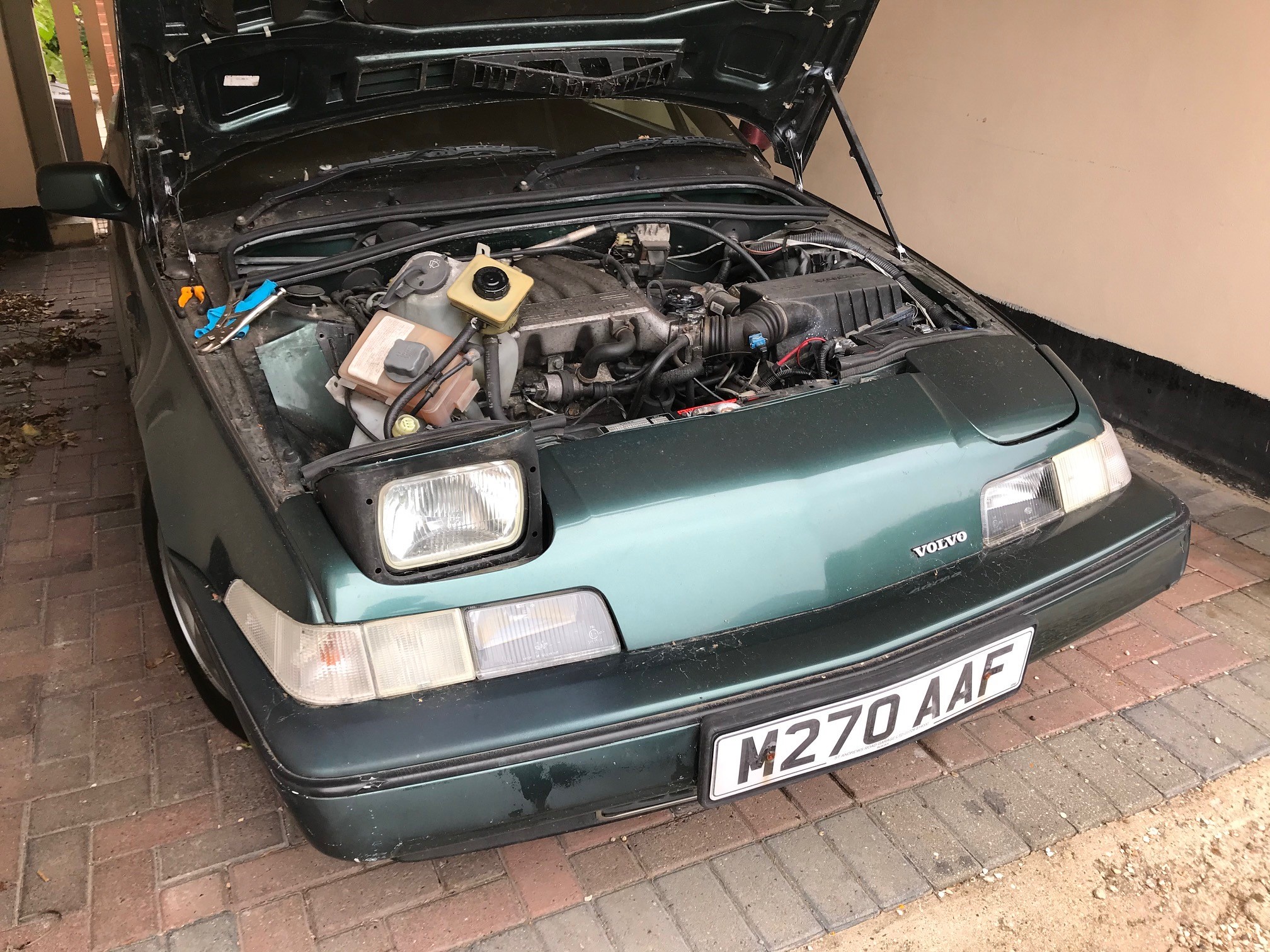 Once free I tried soaking it in WD and cleaned all the connections etc, but I couldn’t get any life out of it, so I ran it in manual mode for a good few months while I sourced a replacement motor.
While it was at the bodyshop having the rear arches done the garage got confused by the one up one down look and tried to fix it for no reason other than an impending MOT request, but as they didn’t know about the microswitch in the bonnet catch they managed to snap the pivot on the working light trying to get that one up! Oops. In their defence, when I got the car back, the pivots plastic was really degraded, so I think it hadn’t taken much force to break them. I think it’s a pedestrian crash protection thing they are designed to fail anyway, so plus their age they weren’t happy. 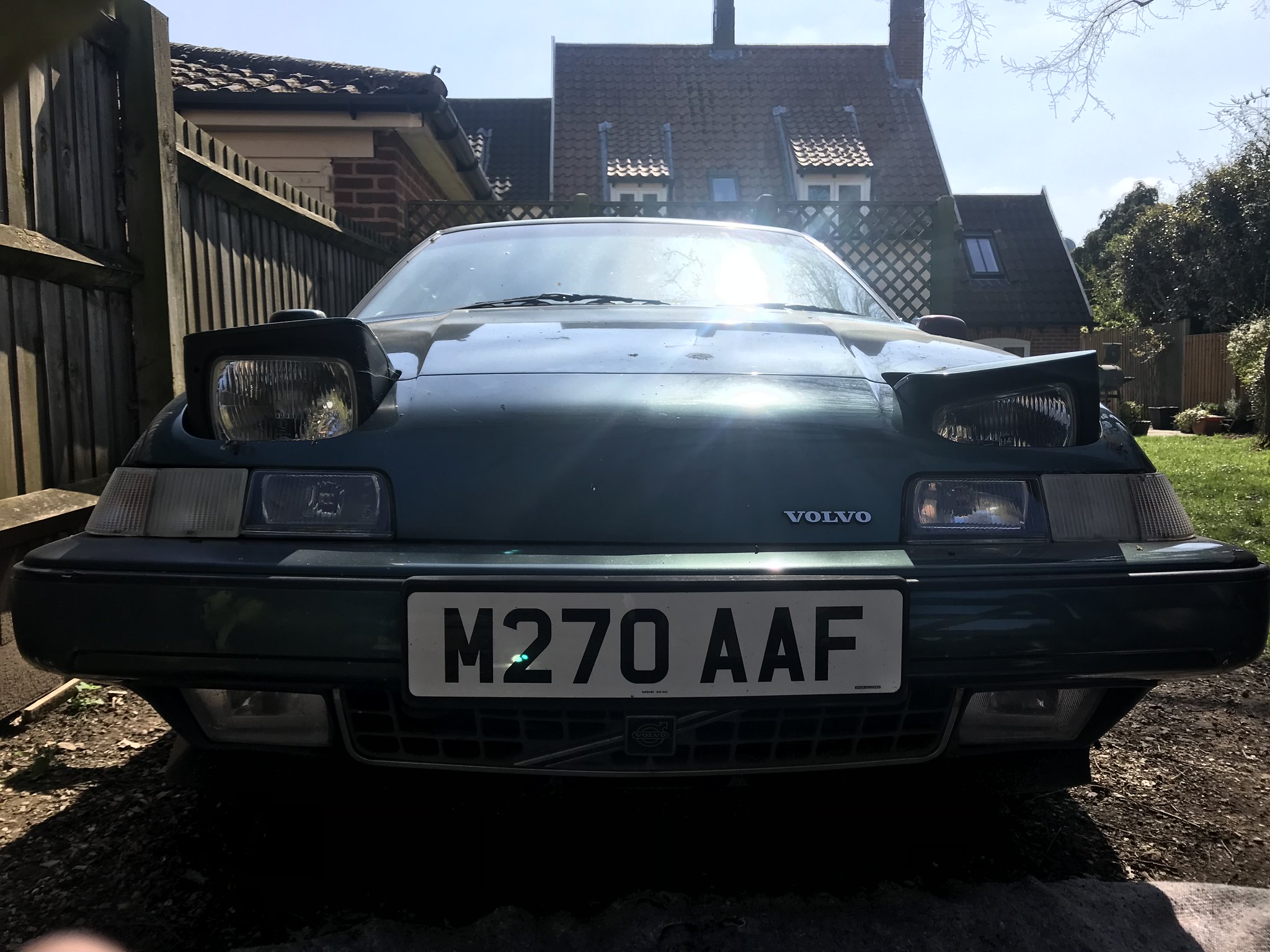 I fitted some new pivots (from French eBay because of Brexit postage from some of the Nordic suppliers) to the working side and a new motor to the non-working side and all is almost all good. I say almost because sometimes (20% of the time) the “new” motor is very slow to rise and does so in pulses. At first I thought it was range finding, but I’m not sure it’s that smart. Now I think I probably over torqued something, or the linkage is struggling for grip on the motor as the conical splined fitting was pretty worn. Before I road tripped to Par I dowsed the area in WD40, because why not, and it’s not been on a go slow since. So maybe it’s fixed. It’s certainly better! 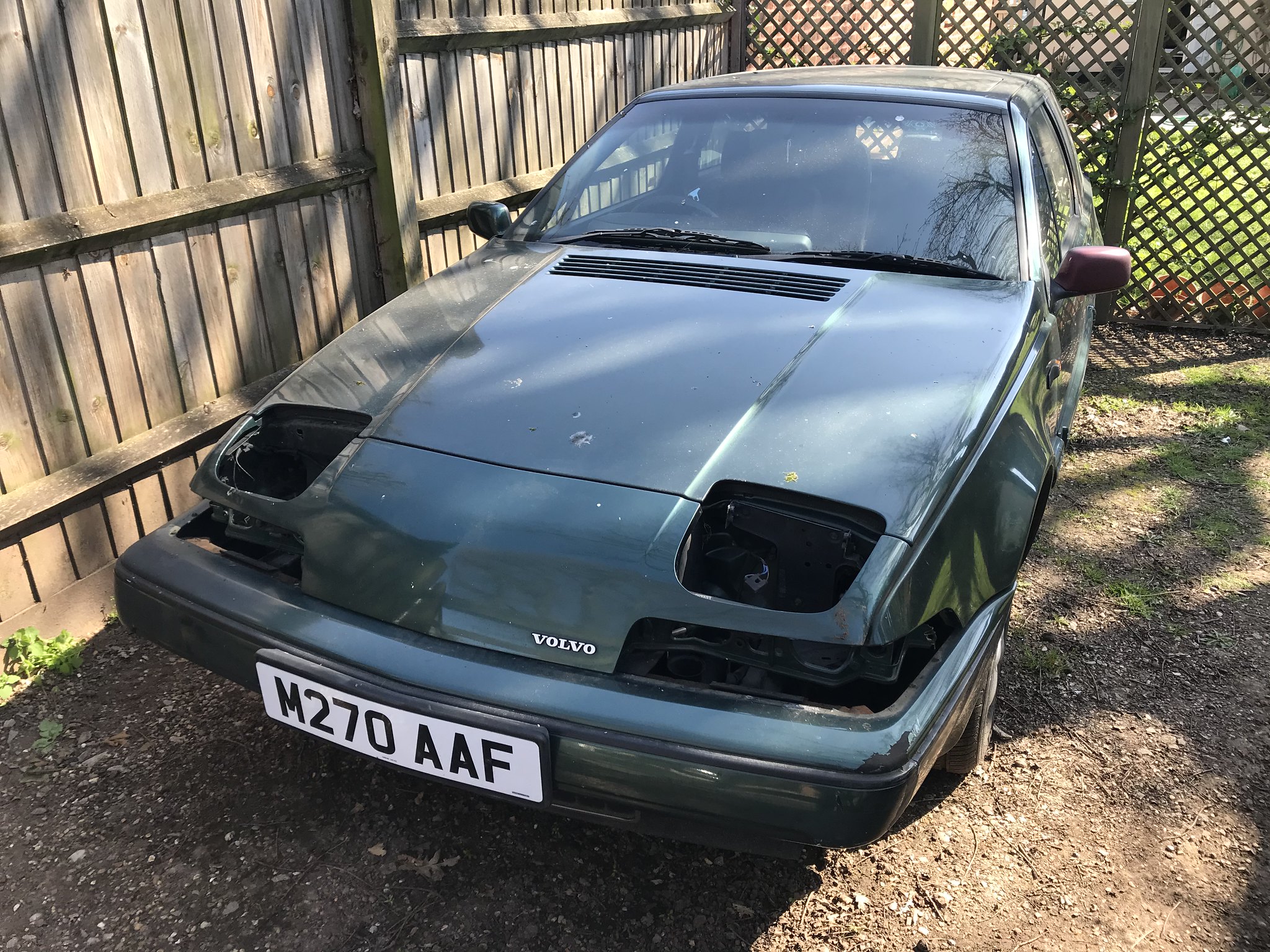 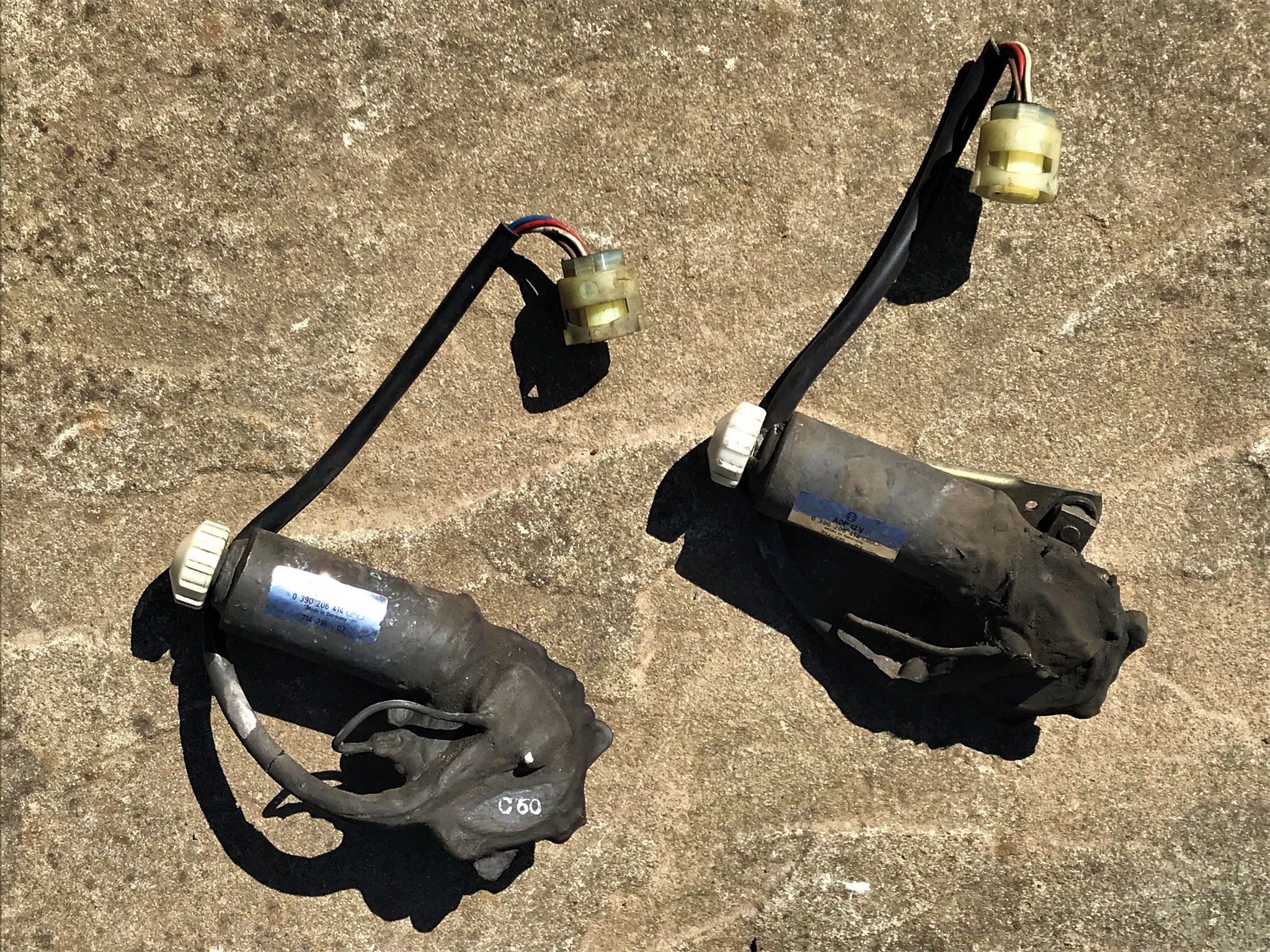 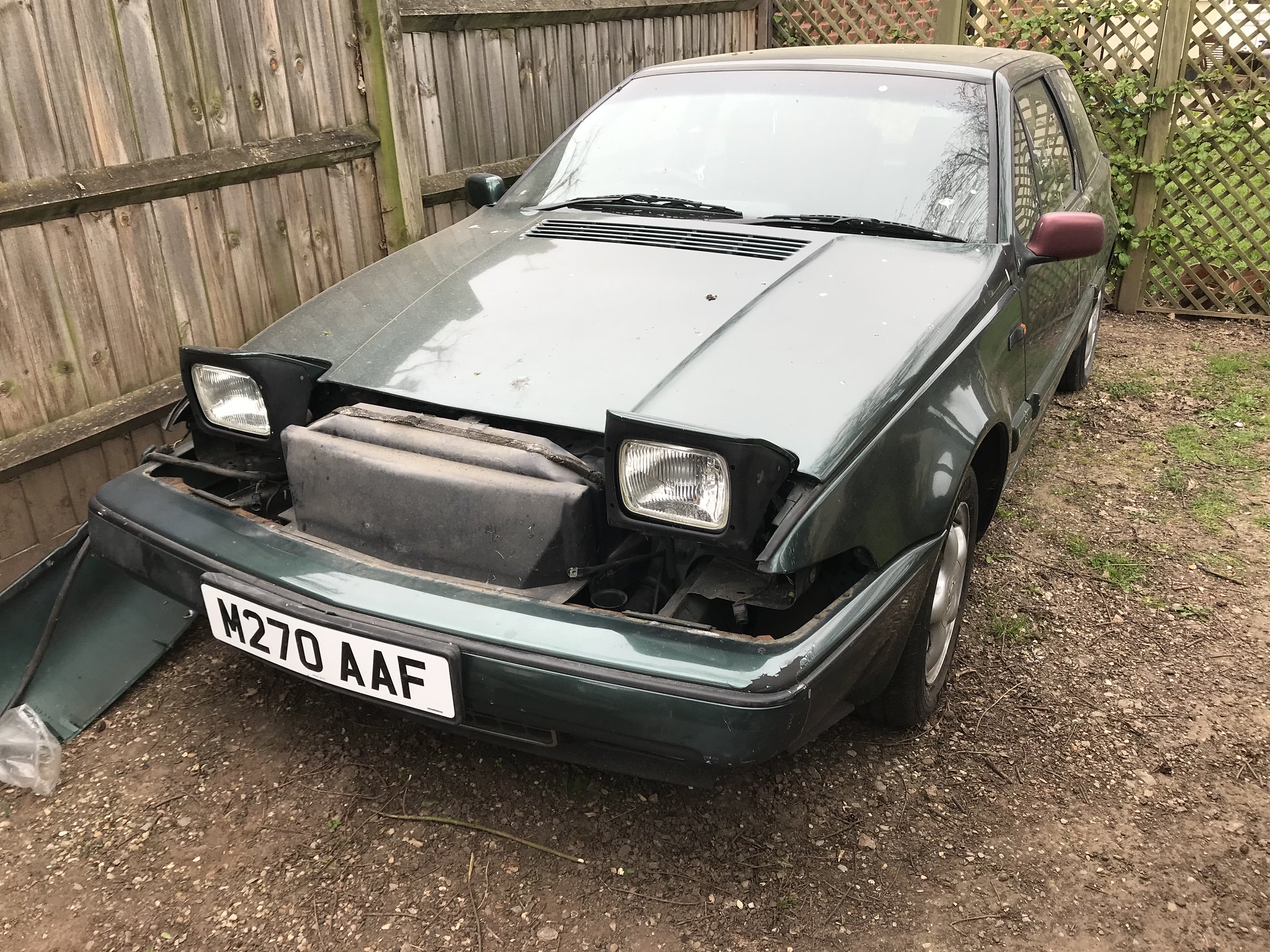 And while I had the light pods out I lubricated and replaced the missing beam adjusters with some BMW ones (?) which are a close fit but did crack a little. They’re still allowing for beam adjustment now which is good.

Did you redo all the board connections too?

Well, I tried to, but I've come to the conclusion my binnacle is largely toasted. While I had it apart I tried to repair any damage I'd cause unsoldering the thing and had a go at any other obvious flaws. Big one here near the brake light out warning bulb on the track for the Info Centre backlight: 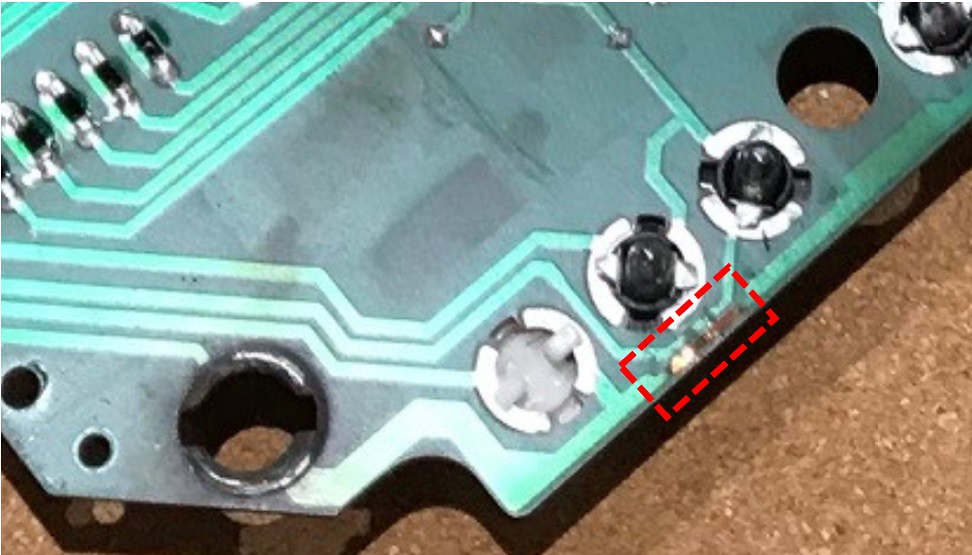 But this story becomes a bit of a saga. I went in originally to repair the ODO gear, but had to unsolder the Info Centre and Tacho as previously mentioned. I was a bit worried about putting all that heat through the known to be fragile Info Centre to unsolder it, but on balance I decided that as none of the fuel consumption or speed average functions were working (presumably because the ODO was out) and the Engine Coolant Temp only ever reads cold, so I was probably better off taking the risk and having a working ODO. Once re-assembled there was much joy to have achieved a recorded mile, but the Info Centre seemed to have died in the process. However, on closer inspection in more dusky conditions it was working, there was just no backlight and glare had made it look off. I also discovered that if I had the lights on and tried to indicate I blew the CEM fuse. Binnacle lights and CEM are on the same fuse so I started to put it all together.
Back behind the dash and it got more complicated – that broken track I’d tried to solder for the Info Centre back light was now presumably a short circuit to a previous owners bodge. Their solution – which I’d ignored because it worked and because I was looking at all things ODO and not lights – was to steal a bulb off the light switch backlight and run it directly into the binnacle. Something like this as far as I can tell: 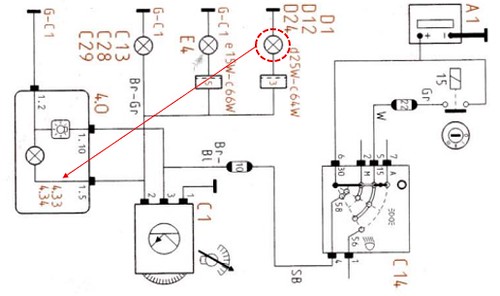 Thinking I’d maybe fixed the PCB I removed their modification and tried it as per Volvo designed it, but still no light. As by now the PCB was soldered back together I didn’t want to risk taking it all apart again, I re-instated the bodge, but made a better job of it, soldering and heat shrinking rather than the prior twisted wires and inso-tape. 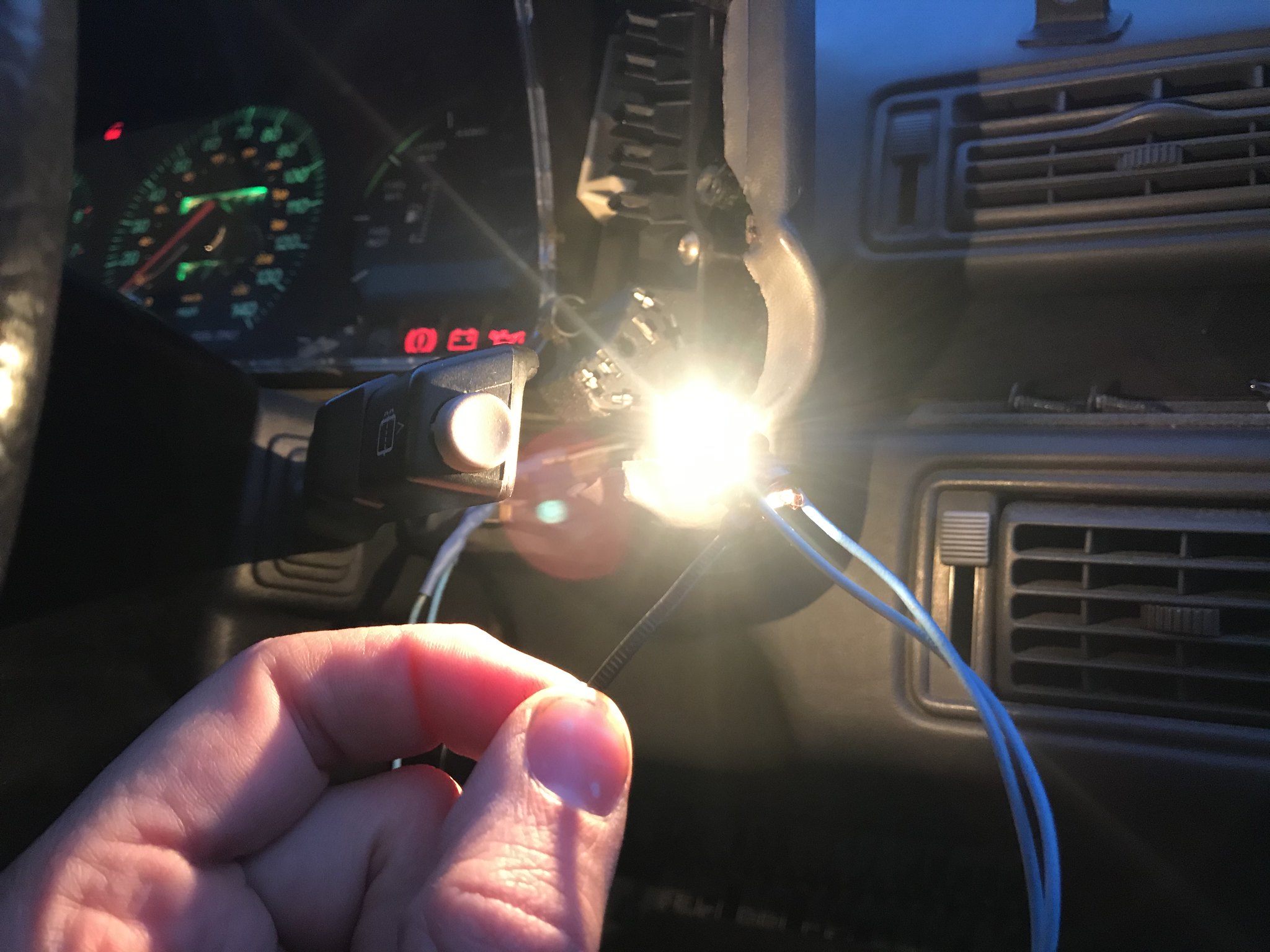 Now the Info Centre lights up again and I can see my inoperative range, fuel consumption and Coolant temp functions, but I can also see Oil temp, External temp, fuel level and average speed. Small amounts of win.
Top

The binnacle did not take kindly to all this soldering and faffing around. See this video of the speedo responding to pressing the brake pedal

It was a temporary, yet fun phenomena, presumably a result of heat on components from the soldering
Top

If you can shoulder the costs it may be worth giving it a dutch holiday...
Current Jobs to do (23/1/22):
Fix Central Locking
Fix drivers side speaker
Annoying Scratching Squeak
Water leaks
Complete Front O/S rebuild
Top

It can be a bit of fun getting your parcel back though, as we found out when he posted the instrument cluster back to me a couple of years ago - the moral of the story being, never trust the Dutch postal service, Yodel or the Hemel Hempstead Conservative Association

I'm keen on the idea of giving it the Dutch holiday. Luckily, I've been reading around the forum enough to know this isn't a euphemism.
My issue is that (and it gives me great difficulty to write this) I don't intend on keeping M_AAF much longer due to other less deserving carmittments.
I want to keep dailying the 480 as long as I have it as I really do love it, I haven't bonded this well with a car for ages, and putting it out of action for a few weeks doesn't suit my plans.
I have toyed with putting this 480 into a "permanent" slot instead of the 440, but because that's a family heirloom and disgustingly underappreciated as a model I feel I need to keep banging the 440 drum and maintain campaigning its virtues.

What would be better for me is to replace the binnacle with a second hand one - I just missed out on one for £70, supposedly all working - and donate my binnacle to someone here free-of-charge for parts or renovation.
Also, mine has to stay in for at least 400 more miles - i've set the trip and soon it will display, 123,456 miles + 789.0 trip

Gosh, I hope I did the maths right

That's MY kind of nerdism!

You're probably better speaking to Robert directly; Brexit has made the dutch holiday a tad more complicated.

He may be able to just ship you a board as its the later more common type.


Rob88h wrote: ↑
Thu May 06, 2021 10:31 am
What would be better for me is to replace the binnacle with a second hand one - I just missed out on one for £70, supposedly all working - and donate my binnacle to someone here free-of-charge for parts or renovation.

It'll be broken.... unless you see it working and then pull it out, assume its dead.
Top
Post Reply
64 posts