Back in June, following a very kind invitation from Martin Mc, I took on his Celebration 467. Being an N-Reg it has been christened with a name beginning with N - Nilani, which apparently means "Moon".

Martin had intended this car as a restoration project but other matters got in the way, meaning she had to make way for a very nice camper van. As Martin had described in his thread on the car, she was/is a good example in principle, but definitely in need of some serious TLC

The main issue was the driver's door: it had seriously dropped, and shutting it required a "knack" that on the day of collection I certainly lacked - I kept getting in and out via the passenger side! Connected with this issue was a mangled front wing. 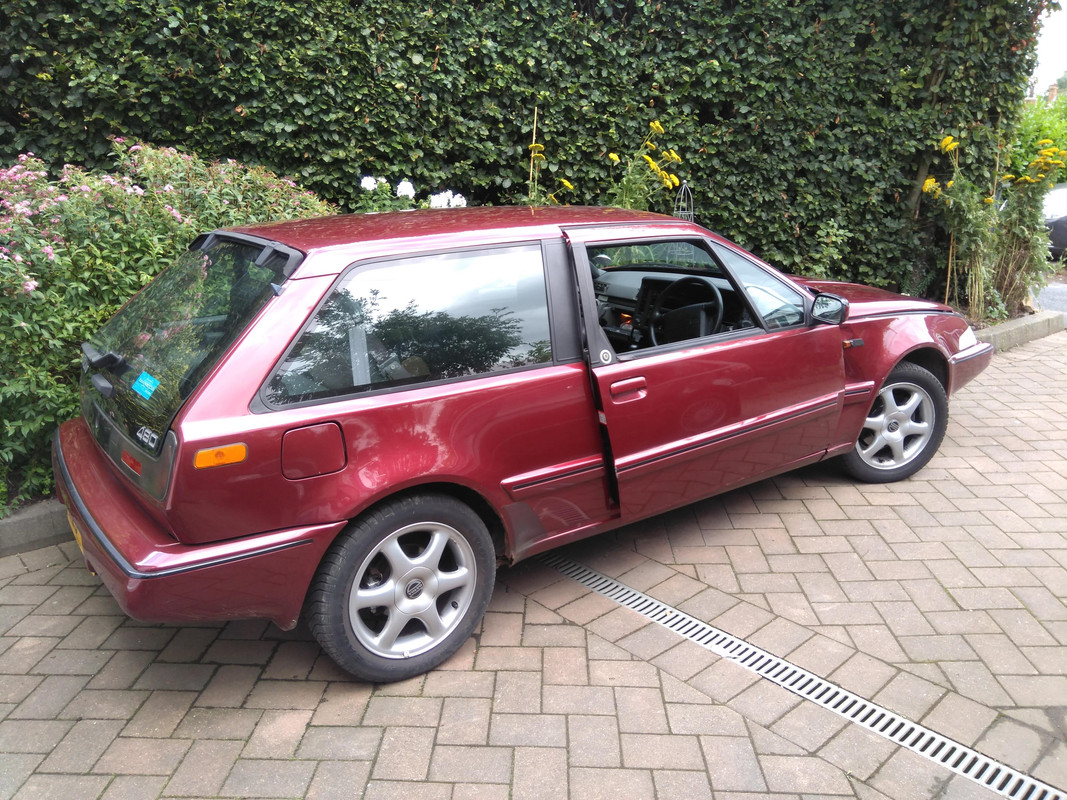 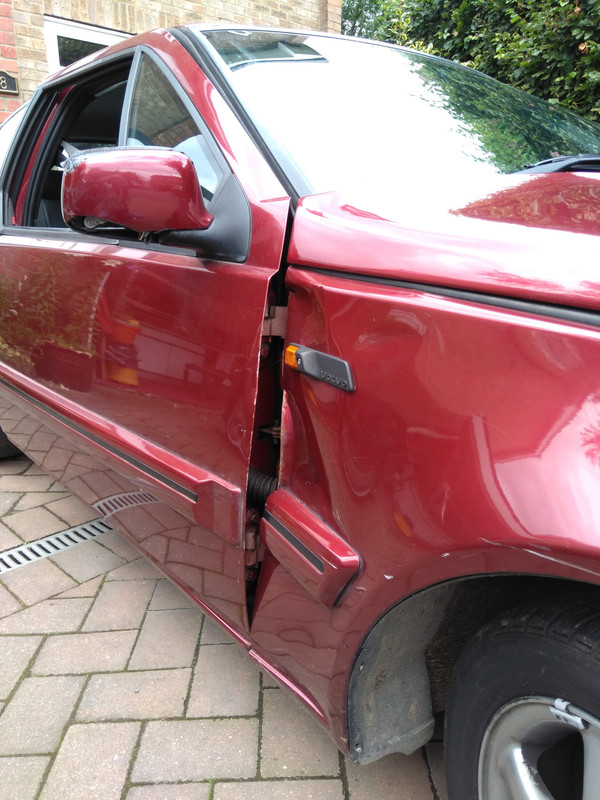 So...investigations showed that the door had twisted on its hinge plates and snapped part of the welding where the lower hinge joins the bodywork. I bolted a plated across that to secure it, re-aligned the door hinges and catch, and - hey presto! - had a working door again

Nilani then spent quite a few days looking like this: 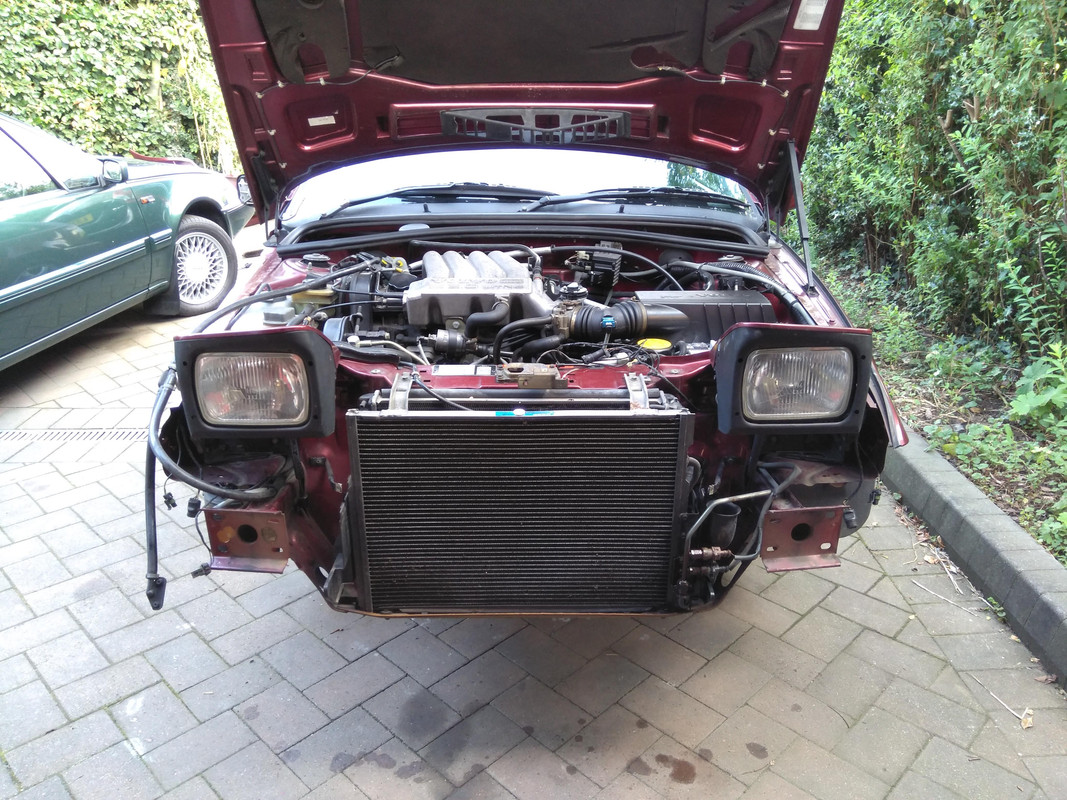 because I decided to delve deeper with cleaning/treating any rust/painting etc.

Meanwhile, Jeff had kindly provided a new wing for Martin, which was making its way to him via Sylvia and then me. It never actually got further than me...I re-painted it (it was solid red) and replaced it, meaning that whole area of the car looked a lot better.

Meanwhile, neither the front bumper nor front spoiler were looking at their best (and these photos really don't show the half of it)... 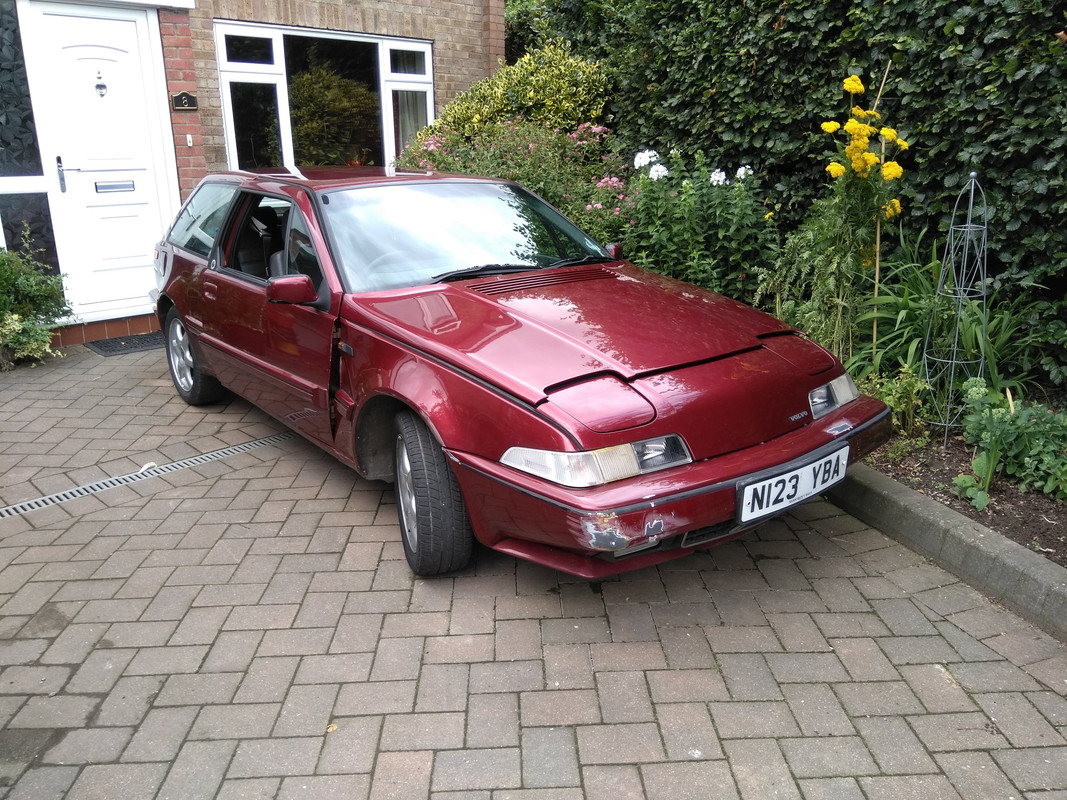 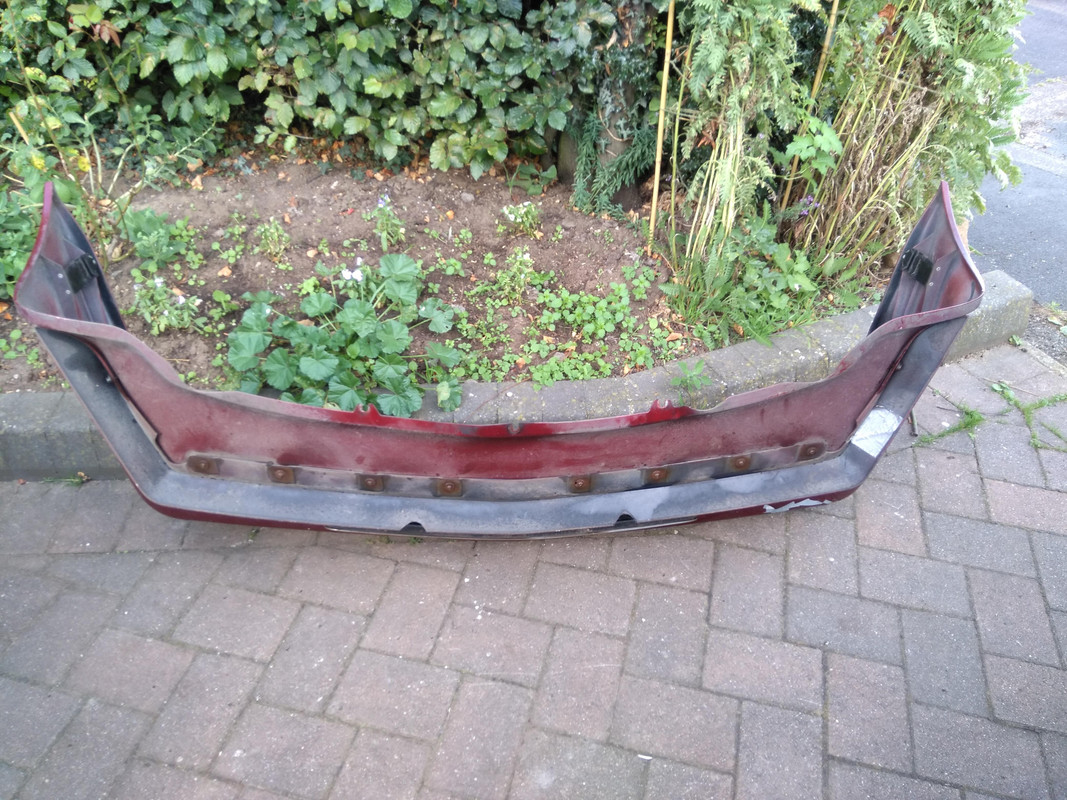 so I have also been spending time rebuilding the spoiler and getting the bumper back up to a useable finish for now.

Mechanically, Nilani seems to be in good shape. The battery looks pretty new (even if it wasn't actually fixed in place or, in fact, even properly in place at all!) and the oil colour suggests a recent service. However, a coolant change was badly called for: I've no idea when it was last done but it had reached the brown sludge stage. A good clean through (including cleaning the sender) and replacement with genuine Volvo coolant as always, and we now have a toasty warm car and the temperature gauge on the infocentre works again rather than always reading "cold"

A visual inspection of the air-con components while the front of the car has been stripped down suggests the system should all be sound, but it definitely needs a recharge because it isn't kicking in at all.

Both door mirrors had definitely been in the wars: I had a spare in the right colour to replace the passenger side, but had to buy a replacement for the driver's side (in peacock blue, so more painting necessary).

Finally, this afternoon, I put her all back together again for the first time since I brought her home. By then it was too dark for photos, but I'll take some tomorrow and post them up so you can see where things stand now.

discovered that the retaining strap had been broken off and rewelded, no sign of previous in paperwork so been done by previous owner and never recorded?

just a shame they didn't bend the section they had cut back into line with rest of inner skin!!! all sorted now though

only found as the bottom back edge of door trim was waving in the breeze, not that the car has gone beyond end of drive to be turned around a few times

I'm absolutely delighted that you've made such excellent progress with 'Nilani'

and I did enjoy the flutter of excitement seeing her pictured so clearly in your write up. I dare say she'd still be festering away in my garage, had I not plucked up the courage to let her go to you - totally the right decision, and clearly vindicated by the work you've already done to bring her back up to the excellent standards you have for our favourite marque. It would be brilliant if you did make it to the Lincolnshire meet in Nilani - you never know who might pop up there too

(am working on another acquisition... watch this space!)

Still got the motorhome on the drive, and we've very much enjoyed our summer (and autumn) travelling around the UK - the girls have really taken to the mobile glamping scene!

I do hope the running restoration continues apace, and I very much look forward to seeing more pics as the story unfolds further.

Thanks Martin - I owe you and am so pleased you are pleased!!

Hope to MOT her this week so fingers crossed...

I'll get latest photos up asap so you can really see progress.

Alan - I think it's more me liking the Celebration: the majority were burgundy so choice becomes a little limited

Interesting about the check strap on Nora - not guilty!! Glad it's another thing sorted though: I will need to see her again in due course and have high hopes

Nice progress so far! Shall keep the fingers crossed for a/c. I believe all parts for r134a are unobtainium. Some parts are available for R12 (but you can’t get R12 gas!).
Get them to vac the system and make sure it can hold vacuum for at least 30 minutes.

As for me (who’s stuck with a broken R12 system) I’ve got a deffo different plan!
Top

Thanks Jeff, good point - I know Hutton Brothers will do the job properly...

Managed to get Nilani washed today so here are a couple of photos of how she is looking now. There is a colour difference between the wing I have painted and the door, but in real life it is nothing like as noticeable as the camera has made it! 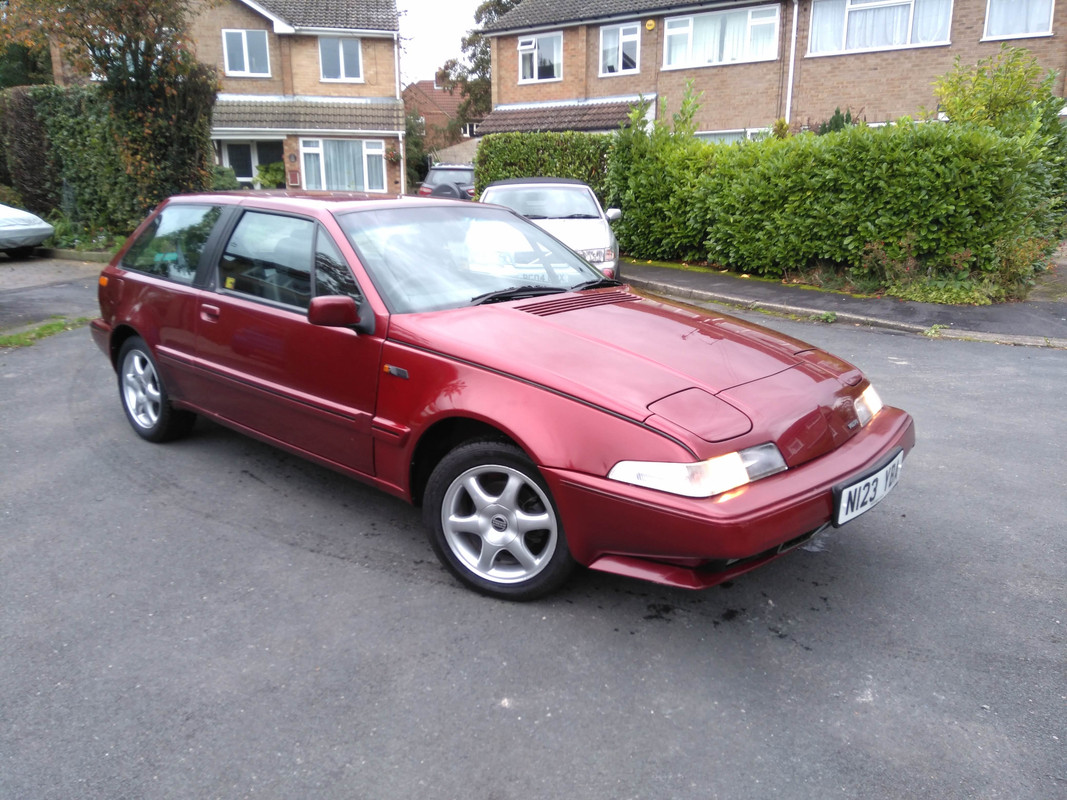 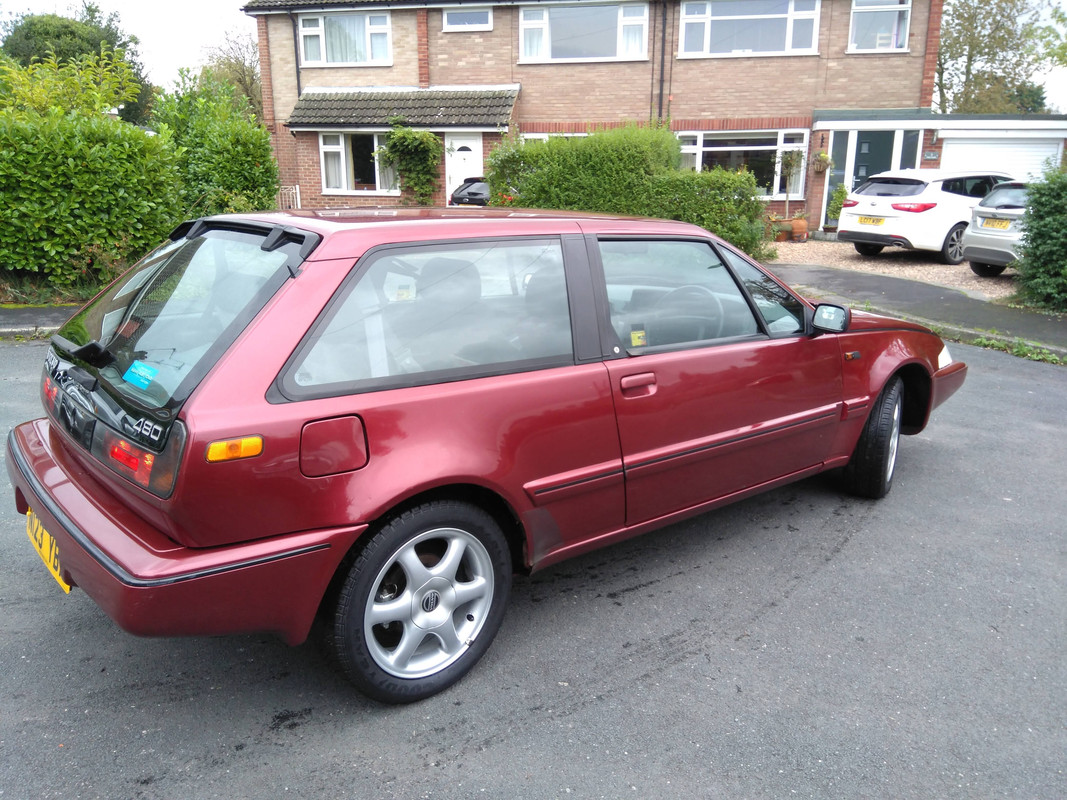 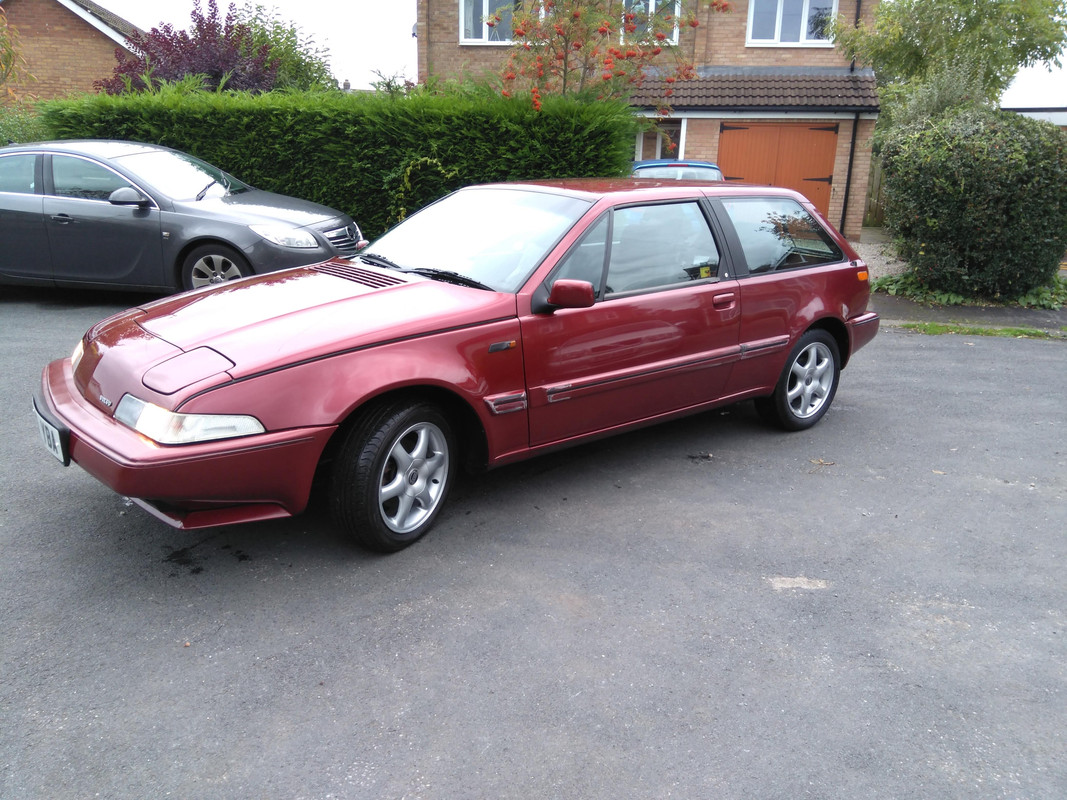 Next jobs will be the wheel arches and passenger side rubbing strips, which appear to have been used for just that! However, those jobs can wait until after the MOT - I really want to get using her now...

So...judgment day came and went very smoothly when Nilani (to use my mechanic's words) "shot through the MOT"

The rather obvious hole in the rear arch/sill does, of course, need welding but apparently it is not structural and does not cause any reduction in strength, and so counts just as an advisory. I am making the necessary arrangements re welding as I type, since it isn't going to get any better (especially over winter) but at least that means the car can be used right now.

So she is due her first "proper outing" with us tomorrow when we catch up with everyone in Lincolnshire. So no looking out for Lily the green GT this time; fingers crossed all the effort put into Nilani over recent months pays off and she proves reliable tomorrow!

I have been rather neglecting this thread, so time to put that right!

Ever since the Lincolnshire meet, when Nilani behaved impeccably. I had to take 3 months off work due to being ill, which being self-employed is no joke, so given we don't actually need 4 cars (!) we sold the V60 - as our one newish car, at that point she was worth more to us in monetary form than as a car to own. As a consequence, Nilani has become my daily driver

She is clearly appreciating the use, and (mentally at least) I am back in my twenties again driving around the countryside in a 480.

Work has continued (although still no progress on the bodywork side of things since other points keep taking priority). A new thermostat cured the fact that she wasn't warming up properly. The tyres were an odd mixture and, on the rear certainly, very (worryingly) old, so she now has Avon ZV7 tyres all round. I usually go for Goodyear or Pirelli but ATS's offer made the Avons too good to ignore. They're a bit noisy on rougher road surfaces but I am very impressed with their handling.

The front brake discs were below their minimum thickness when checked (despite still performing very well) and the rears not far off. So I have now fitted new discs and pads all round, along with a new rear N/S caliper which on inspection had seen better days (interestingly, the O/S was obviously replaced not very long back). Brake fluid changed - car now really does stop on a sixpence, as the saying goes.

Voltmeter and oil pressure gauge fitted (thanks Alan) along with the pressure sender and bracket (courtesy of Ebay Germany).

Next up really has to be the bodywork, but we're getting there

Always good to see an update

Sorry to hear you've been off colour, work wise,but I'm sure (as you've indicated) the wedgie cure is doing wonders for you!

Now that I'm back in wedgie world with 'Lilani' (only joking - she's yet to be named, although Lilani apparently means 'Dark Beauty'!) it would be great to take a spin over to Yorkshire and compare notes (i.e. pick your brains for ideas around leaks,maintenance etc).

Do keep the pictures of Nilani coming!

Nilani has indeed been a great help to me health-wise.

You are very welcome anytime to come over and let's compare notes. You have all my contact details so give me a shout! Look forward to seeing "Lilani"

Glad you seem to be feeling more up to it, I remember you saying with my car that the arches can be replaced fairly easily, on seeing yours there looks like a major dent on the front quarter - I presume this is a simple replacement, or is it already done?

MisterH wrote: ↑
Thu Jan 16, 2020 10:17 pm
Glad you seem to be feeling more up to it, I remember you saying with my car that the arches can be replaced fairly easily, on seeing yours there looks like a major dent on the front quarter - I presume this is a simple replacement, or is it already done?

Yes, it was right mangled! I have replaced it since, and you are quite right that this is why I know that removing and changing the front wings is easy...

The replacement is shown in one of the photos above - the colour mis-match is nowhere near as marked as the photo makes it appear (I am pleased to say!)