I've been lurking on the forum for a while -- initially when I was dreaming about owning a Volvo 480 Turbo after having seen one in Germany once; then more recently as I became a rare owner of a Volvo 480 Turbo in the USA! I figured I'd start a thread to capture repairs, restoration, and ownership of a USA Volvo 480 Turbo.

The Purchase and Import
I purchased the car in Sweden. Last year, my partner had a work trip in Copenhagen, Denmark and I tagged along to sightsee and, more importantly, check out all the cool European cars. I scouted out all the Volvo 480's I could find in the nearby area on sites like mobile.de and autoscout24 and found a good looking 1993 turbo in Växjö, Sweden -- nice black metallic color (305), good condition, low miles (77,000 KM). I took a day trip up to Sweden on the train and had a great afternoon checking out the 480 Turbo, taking it for a test drive, and speaking with the owner of the shop and his friend. I ended up agreeing to buy the car and then had to figure out how to import the car to the USA. In the USA, we're only allowed to import vehicles not sold here after they are 25 years old. This is based on the production date of the car. The Volvo I bought was made in November 1993, but it was May 2018 when I purchased the car (about six months too early). Thankfully the seller was kind enough to store the vehicle for a few months while I waited for it to mature and arrange shipping. I asked around in some Facebook groups for advice on shipping and imports and found a good recommendation. The importer was super helpful and arranged picking up the car, getting it prepped for shipment, and dealing with customs and paperwork. My partner actually wrote up a post about this over at her blog on Garage Riot, The Journey of a Volvo 480 Turbo. Also interestingly, someone else wrote up an article about the same car I bought, Rare Rides: The Volvo 480 of 1993, Which Doesn’t Look Like a Volvo

480 Turbo Comes to America
The car finally arrived in the USA at the end of December and I was able to pick it up from the port in Baltimore, MD in January. Here are some pictures of making my way to the port to pick up the car. 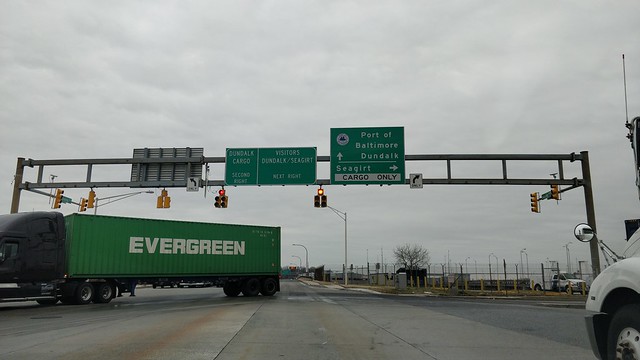 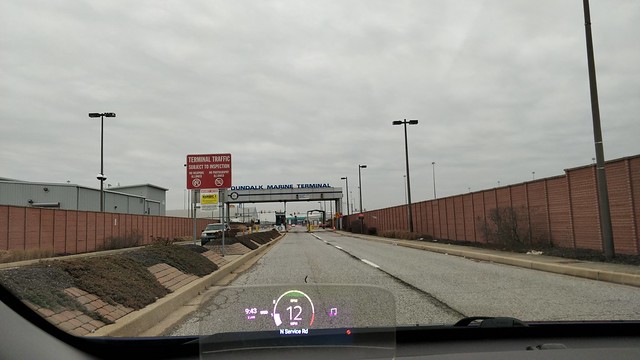 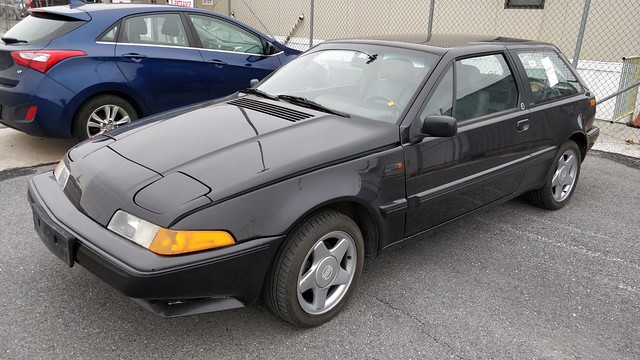 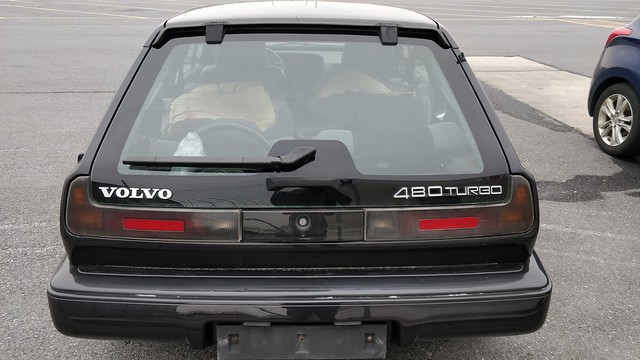 Stay tuned for future posts about the car, more pictures, and updates on projects.
Top

Congratulations! Looks like you've got a nice one, enjoy it!
Current Jobs to do (30/12/19):
New Tires
Fix Radio/Cassette
Fix Central Locking
Bodywork
Top

Welcome to the club - looks like a cracking nice car there ! When I picture roads in America, they are very long and straight but the 480 is great fun on twisty turns so hopefully you're some place that doesn't fit my mental image. Hope you have a lot of fun driving it and keep us updated - always nice to have a new owner on board. BE WARNED 480s are highly addictive!!

Registration
After months of waiting for the car and finally getting it home, my next task was to deal with all the paperwork for registering the car in the USA. My importer had dealt with the most troublesome paperwork -- the US customs and border import entry form CBP 7501 and the entry release form CBP 3461. With the customs import forms, the EPA 3520-1 and DOT DS-7 forms (needed to register a foreign vehicle older than 25 years), the bill of sale, and the original registration papers from Sweden, I made my way to the local Motor Vehicle Administration (MVA) office. I waited about three hours and had a little bit of trouble convincing the staff at the MVA that I had all the appropriate paperwork, and translating the foreign registration certificate so they could enter it into the system. However, with patience I finally emerged victorious with license plates and registration for a USA 1993 Volvo 480 Turbo! 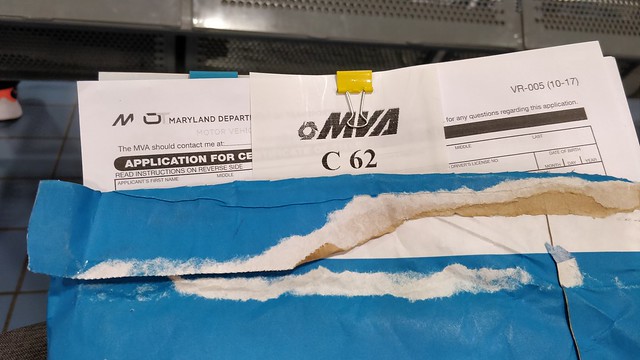 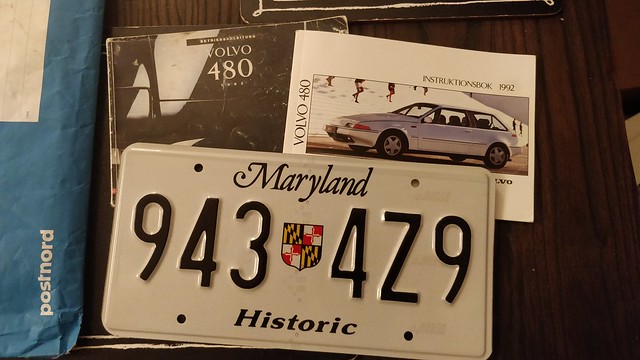 Installing USA license plates
Sadly in the USA, unlike many European countries, we do not have the option of both USA or European sized tags. They only make and provide USA sized tags, even if they are to go onto foreign cars. This means that our USA tags look a bit out of place, especially with European plate mounts. I ended up finding some generic mounting brackets that allowed me to bolt them up to the existing holes already in the bumpers of the 480. Off came the euro brackets and on went the USA ones. The only way to mount the plates with the new rear bracket without drilling new holes was to keep the old euro bracket on, which makes it look less than ideal. Maybe in the future I'll find a better way to mount the rear plate, or at least spruce up the old bracket by painting it. 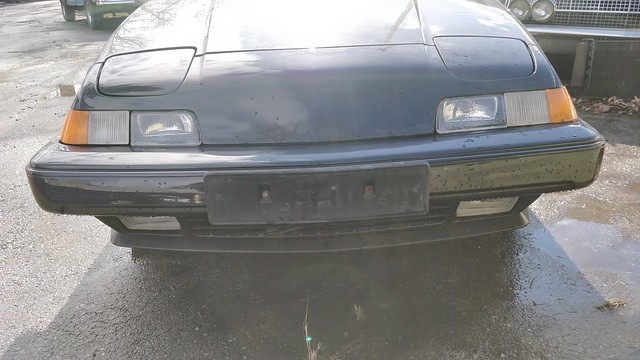 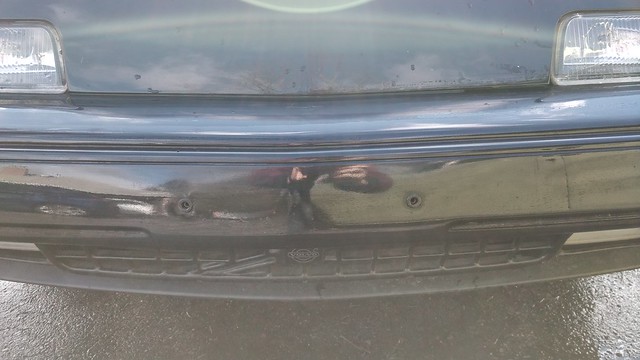 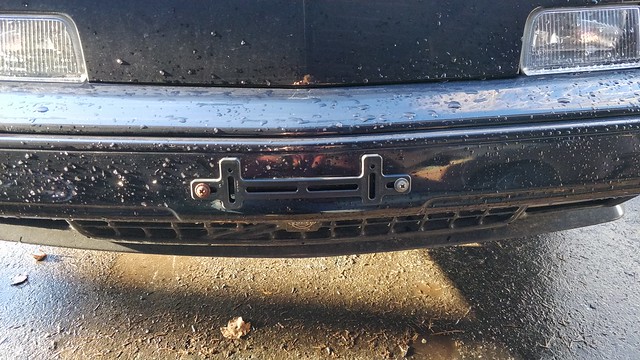 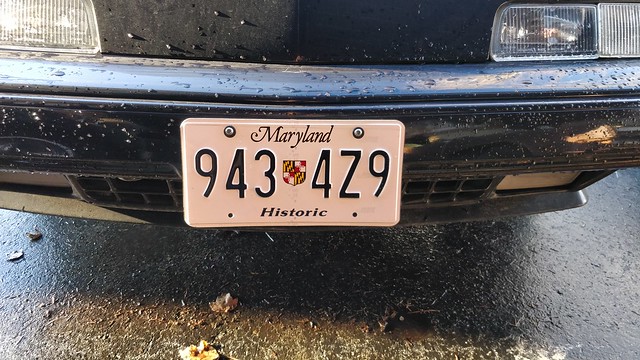 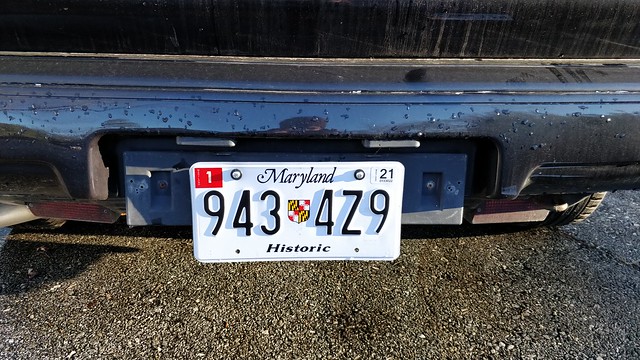 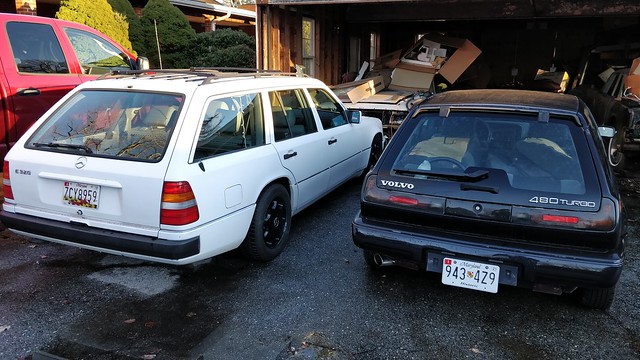 the front plate doesn't look too bad but that rear......

If we got a front number plate (white in the UK) made up with similar details entered on it, would that be legal?
Top 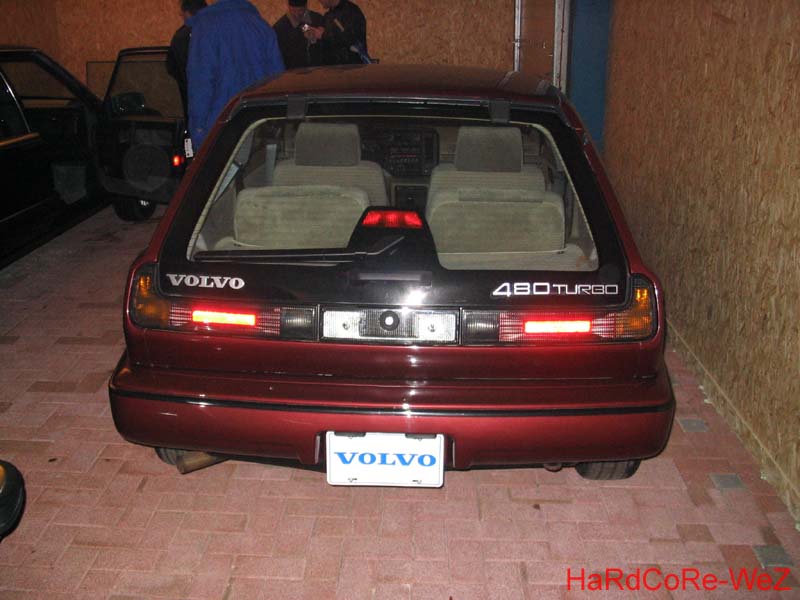 If only you could get this bumper 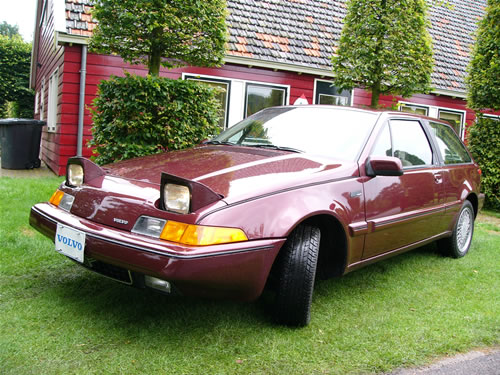 Google translate attempt:
"This in new condition 480 has only driven 85 kilometers. It is a prototype developed for the American market. It is the only 480 with a Turbo engine in combination with a machine. The bumpers and lights are also different from the normal version."

Interestingly
"Private collection
Swedish Collection is a special private collection with around 85 special models. We would like to let you enjoy this collection and have therefore composed this website. Below is a large part of the Swedish Collection. If mentioned, the cars can be rented (always incl. Driver). None of the cars in the collection are for sale! You can find our 'double' copies, intended for sale here . Would you like to read more about the cars and enjoy unique photos? Take a look in our webshop to the book " FiftyFifty "
Visit
The special, extensive Volvo collection of Swedish Collection in Baarn was until recently very limited. By popular request, we have decided to open the Swedish Collection for 12 days in 2019. Welcome to the SKOJ days !"
1987 Volvo 480 ES, 507274, 217 - Red (Ness)
2001 Volvo C70 2.4T convertible (Olivolvo)
2008 Mini Cooper convertible (Mau)

For the rear plate, ditch the holder and mount direct to the bumper same as the front??
Alan

If we got a front number plate (white in the UK) made up with similar details entered on it, would that be legal?

I've thought about this. There are websites that can make custom Euro plates with whatever text you want. Unfortunately in Maryland we are required to have both front and back plates and they must be unmodified.

I agree the rear plate mounting needs work. I'd like to avoid drilling into the bumper though. I need to look for a different bracket or custom make something.
Top

I have seen the car a couple of years ago, the upholstery has fungus all over the place. Some of the cars mentioned on the website as in concourse condtion, are actually in a very sorry state. We nicknamed the collection "Swedish Deception"

The location is very posh, and so thinks the proprietor he is.
About the 480 in burgundy, it has a unique tan coloured interior, and the DRL lenses are in orange.
Could not find a good picture in my private collection, it is the second car in the row.

O dear, not worth a club convoy off to have a look then

If we got a front number plate (white in the UK) made up with similar details entered on it, would that be legal?

I've thought about this. There are websites that can make custom Euro plates with whatever text you want. Unfortunately in Maryland we are required to have both front and back plates and they must be unmodified.

I agree the rear plate mounting needs work. I'd like to avoid drilling into the bumper though. I need to look for a different bracket or custom make something.

jamescarruthers wrote: ↑
Sat Mar 02, 2019 7:16 pm
On the rear bumper: What about filling the licence plate gap with a reflector or a light or two?

I'm thinking of buying a sheet of UV-resistant black polypropylene plastic to fabricate a filler plate to adapt to the US size plate.
Top

I recently removed and replaced the lock ring on the door which often starts to fade and crack. Wrote up a post over in the How To section viewtopic.php?f=24&t=35860. 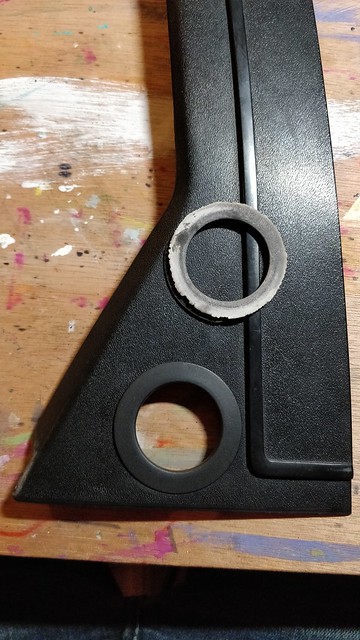 I changed my oil for the first time this weekend. I attempted this last weekend, but was foiled by the unusual (in the USA) drain plug. Ordered a set of 8mm and 10mm square drain plug bits via Amazon. 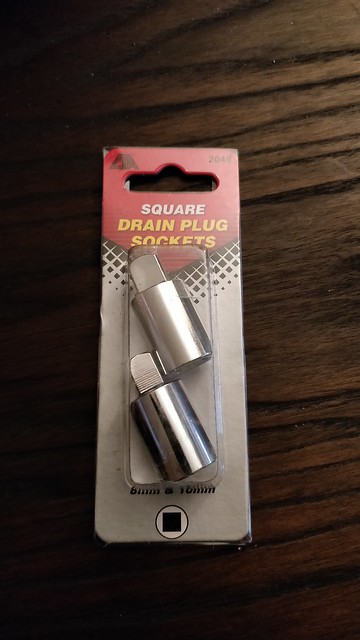 Previously I had posted about trying to find an oil filter in the USA. I have good news for any future US 480 owners that the Mahle OC 223 (which is available in the USA) fits perfectly and based on reading the vendor's spec sheet it meets the requirements of the OEM filter for an anti-drain valve and bypass opening valve pressure. 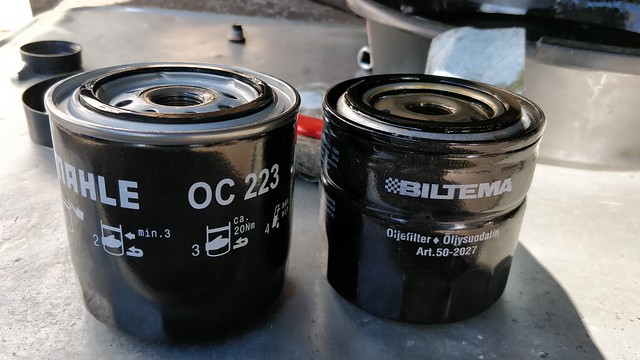 How is the speedometer/odometer in miles doing?
Robert.

Robert, I haven't yet tested it out. I'm waiting until the current odometer in km matches what you set on the replacement one in miles. I think I only have 48km to go. I'll definitely post here with pics and progress!
Top
Post Reply
25 posts