Oooh, as pre-stainless person (but doing soon) ...what's wrong with yours? Is it just not done very well? Are there bad things about them? Did you just have the cat back? Just so I can make informed decisions when It's my turn!

Looks lovely and tidy. Deadening is definitely something I need to do to my doors. I frequently look over thinking the passenger door or window is not shut!
Top MisterH wrote: ↑
Mon Jan 18, 2021 7:40 pm
Haha as a number plate enthusiast, I think the number is fine as you have managed to get the right age identifier(K)

Odd to think that a long time ago this particular car was the first one I had the intention of getting, before it sold to flipping bangers (I believe this is the car right?)

The K was purely coincidence! It is the flipping banger cars, yes, so I think I started off with a good one! (My headliner is still sagging!


edie_fox wrote: ↑
Mon Jan 18, 2021 7:58 pm
Oooh, as pre-stainless person (but doing soon) ...what's wrong with yours? Is it just not done very well? Are there bad things about them? Did you just have the cat back? Just so I can make informed decisions when It's my turn!

Jay-Kay-Em wrote: ↑
Mon Jan 18, 2021 9:04 pm
Like Edie, i'm intrigued about the exhaust. You sound proper hacked off with it. I'm about 80% through my stainless build. Would be interested to hear what you dislike & problems to be avoided.

Urgh... where to start. So my presumably standard exhaust back box started blowing quite badly (may be documented in this thread) and, in my mind, when a part needs replacing it's always an excuse for an upgrade. The stainless represents the perfect solution to mild steel exhausts that eventually rot away will need replacing again. Buy a shiny stainless and basically you are sorted forever.

Firstly, they forgot to re-fit a hanger or something so now the centre box vibrates against the bottom of the car - admittedly not a mark against the exhaust but against the fabricators/fitters.

Secondly, the booming at 70MPH is a joke - probably ear damaging if sustained for a period of time. If I increase speed up to c.90MPH then it is alleviated - very convenient... not!

Thirdly, it cost about £400, which compared to the cost of a standard part is quite a lot - especially when it doesn't meet your expectations.

Finally, generally upon hard acceleration it is just too loud.

Now, bear in mind that I specifically requested the quietest exhaust... The after sales has been crap, basically bring it back and pay for a larger back box and that might solve the problem. I then called a few other reputable stainless exhaust fabricators and they all mentioned that £400 is not enough to pay for a decent stainless and that it would like cost more like £1,000 for something that is properly refined for your specific car. I asked whether they might be able to 'amend' mine for some improvement - they all refused and said you need to start over again.

So basically, I've been put off by the place I used because they just couldn't really care less, coupled with the advice that all these fabricators operating out of sheds are awful. Their websites lure you in with promises of 'working with you to finesse the sound/volume of the exhaust', but the reality is they just cuts the existing off and chuck up something similar in size and shape with no further thought.

I dream of being able to sit at motorway speeds in the car again, without having to turn the radio on loud to alleviate the noise. Wet weather seriously worsens the situation as well!

The problem is, they wheel your car out with a fresh shiny exhaust and at idle it's basically silent compared to the holey back box that is likely to have come off the car. But the satisfaction is short lived!

The plan currently is to rip it off and put on a pattern part exhaust for a couple of hundred quid.
Top

Our WR quattro had a lovey exhaust job done by Torque Technique in Salisbury, unfortunately just found out they dissolved in December

I got my 480 exhaust off the shelf, thought it was rare at the time, but our local motor factors had one on the shelf, don't think it was that expensive
Current Jobs to do (23/1/22):
Fix Central Locking
Fix drivers side speaker
Annoying Scratching Squeak
Water leaks
Complete Front O/S rebuild
Top

Thanks for all the info. I’ll make sure I ask all of these questions when I go! Sorry you had such a rubbish experience.

Ah.... Sounds like a powerflow type franchise, where your "quality" is largely dependant on the fabricator, the boxes are "universal" and all designed as simple straight through affairs, with the only difference being size, not noise reduction or flow.

JP exhausts used to be my go to place when I was back oooop-Norf. Been going since 1974, so know a thing or two about an exhaust.

That's the main reason I went with a standard exhaust on mine! Noisy exhausts are great for about 5 minutes. One long journey or a 4am start will soon have you regretting your purchase.

Us turbo lot are fortunate in that the Turbo itself acts as a silencer (hence us only needing a single silencer), so a valve that diverts the flow past the single silencer for noisy moments was contemplated before I realised packaging it in the relatively tight and tortuous route the exhaust takes would be a no no.

One option you could consider - Sell the damn thing and get a standard one!
Top

No problem at all, just please make sure you choose a place that is recommended or will at least put some effort into giving you what you want.


jifflemon wrote: ↑
Tue Jan 19, 2021 8:43 pm
Ah.... Sounds like a powerflow type franchise, where your "quality" is largely dependant on the fabricator, the boxes are "universal" and all designed as simple straight through affairs, with the only difference being size, not noise reduction or flow.

One option you could consider - Sell the damn thing and get a standard one!

Yeah, that sounds familiar - they did replace my centre box and back box but I don't think they are baffled in the same way as a 'proper' exhaust so yeah probably 'straight through' in some sense.

I might stick it on eBay once it has come off and try to get a bit of money back from it - there might be someone somewhere this would actually appeal to.
Top

I got Lily's built at Demand Engineering in Suffolk at a cost of £800. I got exactly what I asked for, discreetly interesting. The woman who runs it certainly knows all the science and how to get the sound you want. She doesnt use anything off the shelf, they even make their own back boxes. Expensive, but you get what you paid for.
Sylvia

dragonflyjewels wrote: ↑
Wed Jan 20, 2021 12:48 pm
I got Lily's built at Demand Engineering in Suffolk at a cost of £800. I got exactly what I asked for, discreetly interesting. The woman who runs it certainly knows all the science and how to get the sound you want. She doesnt use anything off the shelf, they even make their own back boxes. Expensive, but you get what you paid for.

How is it at speed - 70/80 mph? At this stage I just want something civilised inside the cabin with no booming - I'm not sure I can bring myself to spend a load more on another!
Top

It's great, no drone or boom, perfect for a long motorway journey. As I intend to keep the car long term it was a good investment.
Sylvia

That's reassuring, I might look into it then, likewise I always take a long term view when changing parts.
Top

Nothing to report other than a spring clean and a photo: The car has been neglected over the past year due to moving house, so I have given it a service, including plugs (tempted to do leads as well having read Jeff's service guide).

I also finally got round to installing the new front calipers/pads/discs. I changed the rear pads but regret not buying some new calipers and discs for the rear as well - I am struggling to find some ATE replacements if anyone knows where to find them? I've ranted before about my stainless exhaust, which is both loud and knocks around. A quick look under the car revealed that the back box was resting on the spare tyre well. The whole back box was able to rotate off the connector between the box and the pipe: This meant that the exhaust was blowing - hence the volume. So once this was tightened up and a dodgy hanger was made to keep the back box away from the spare wheel well the improvement was substantial!

Part of me wants to go back to the exhaust fitters, utilise my lifetime guarantee and waste some of their time, but frankly it isn't worth the cost in fuel and the time. It will do for now until I replace with original, something else I'm struggling with - I can find all of the exhaust parts aside from the main length down the car with the centre box in it - any ideas on suppliers appreciated!

Oh and if anyone has a front splitter that they would be willing to sell, let me know! Mine has had one repair too many and is a goner.
Top

Rear discs aren't usually a struggle to get hold of, but calliper's can occasionally pop up on the evil bay.

Is the current exhaust sounding any more bearable now it's sealed?
Top

Rear discs aren't usually a struggle to get hold of, but calliper's can occasionally pop up on the evil bay.

Is the current exhaust sounding any more bearable now it's sealed?

I did speak to WR about their front splitter but it's bloody expensive! Or maybe it isn't and I'm just tight - it was closer to £200 than the £100 advertised on their website.

It's the rear calipers I can't seem to find - I could rebuild the existing but it isn't quite the same. I have searched ebay but perhaps I need to make an alert.

Yes, the exhaust is much better now - the reason why I still want to replace it is because the boom at c.3k rpm is still present. Back box, curvy pipe over the rear beam and rubber bits are all easily sourced, it's the length that runs down the majority of the car with the centre box in it that seem tricky to find. This bit: link
Top

Slightly bigger bore (not much!) but no extra silencer

or the standard one is available too!
Top

Ah, now I may be reading way too much into this, but the version I sent and the version you have sent vary slightly: 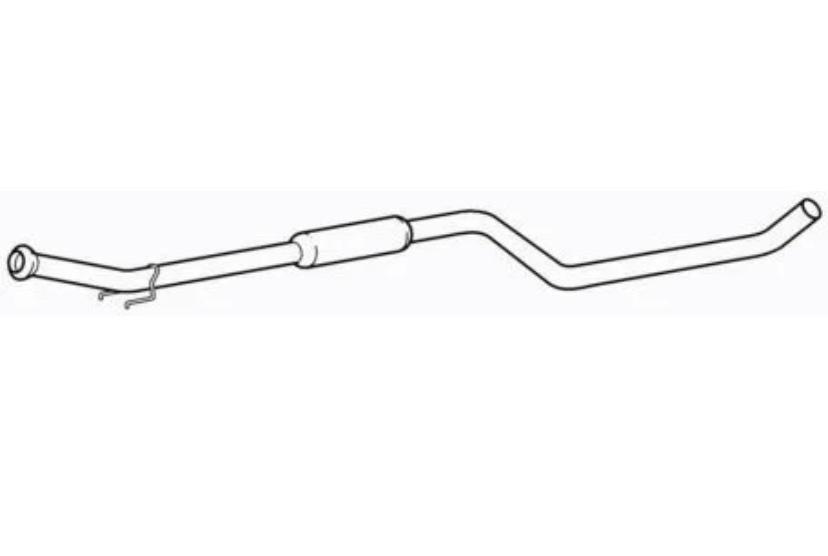 Where is connects to the cat it’s angled slightly differently. Any thoughts on whether this matters?
Top
Post Reply
145 posts