It has to be said, Sylvia - Snazzy looks fantastic in your photos, so by the time all is properly finished you'll be well pleased, and deservedly so

The bodyshop has presented me with a pair of what they say are rear mudflap brackets.

Looking at the exploded diagram in the parts book, there don't appear to be any on the 480. Bearing in mind that Snazzy didn't have mudflaps originally I'm wondering if these are correct ? I know some cars had sealer strip instead (something like 3M ribbon sealer). Before I send these off to my bro to copy, I'd just like to confirm they are the correct ones and not just something my old bodyshop used when they fitted my flaps about 10 - 15 years ago.

James could probably tell me when it was - I bought the set of new mudflaps from him on ebay. We went to collect them on our way somewhere when James was living on a houseboat near Cambridge - this was the first time we met him and he made me a really good cup of tea. No mean achievement given how picky I am, but what a strange thing to stick in my mind !
Sylvia

they may be.... or they may just be the bits that hold the inner arch in place.

They look identical to the bits I did on Britney very recently - right there in the middle. 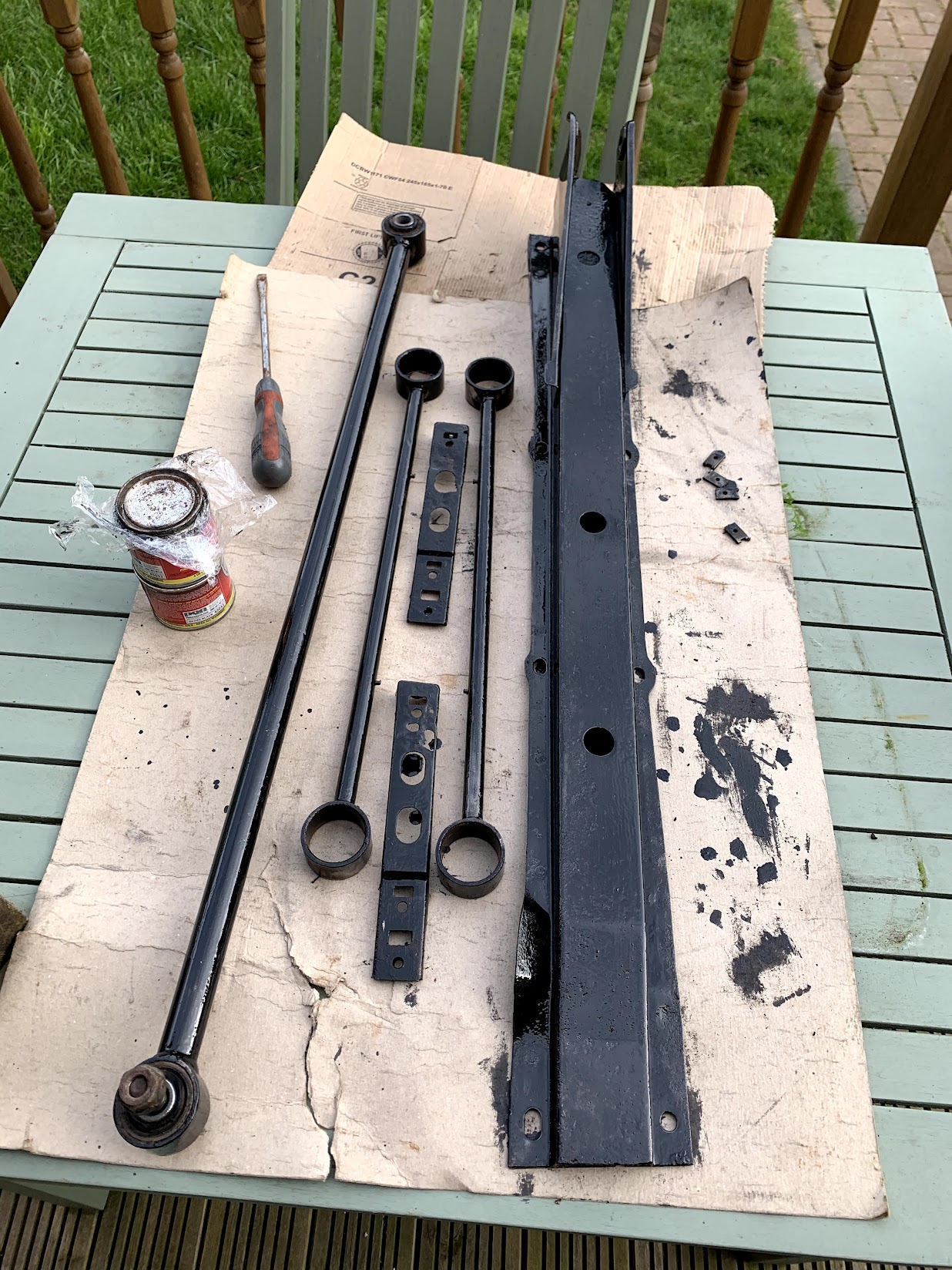 And Britney also had mudflaps....
Top

I feel another jobbie for my fav engineer coming on....

in stainless?
Be rude not to make a several sets wouldn't it?

gawd knows, he hasn't seen them yet, I leave the technical stuff to him


Be rude not to make a several sets wouldn't it?

I'm hoping to stretch it to four pairs, one for Snazzy, one for Lily, one for Sven, one for Eva - it's not likely to carry on 'one for Henry, one for Britney' etc

the bro gets bored with repetition. First one's a challenge, second one might have a tweak or two to the design or method, third one is OK then it's all downhill on interest...
Sylvia

The flat piece should be welded to the car. 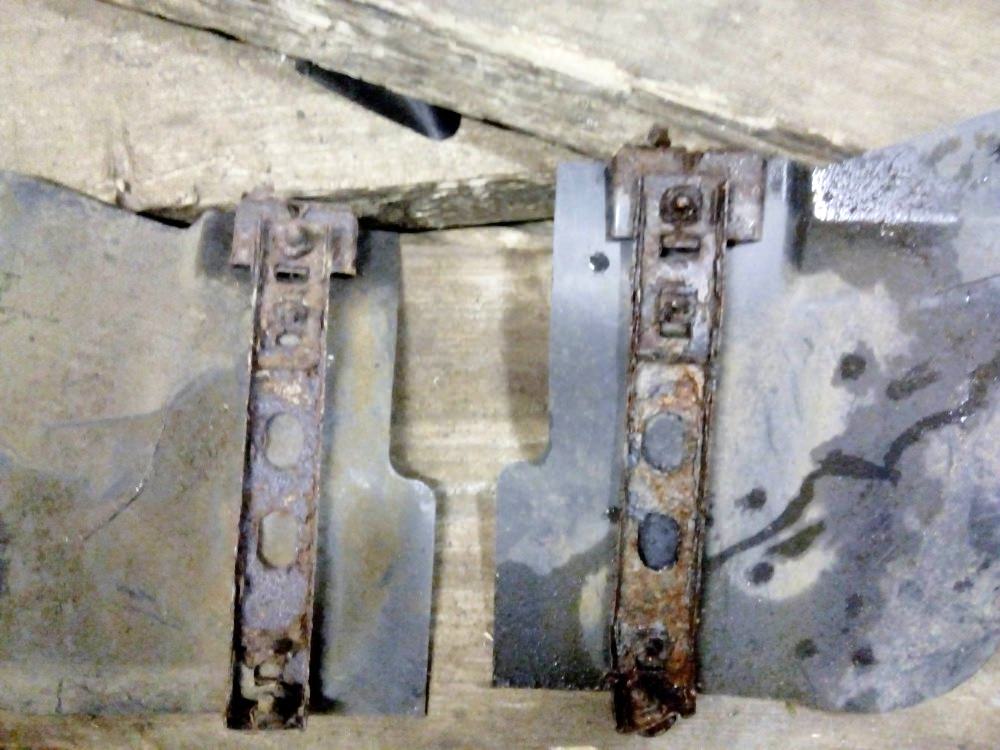 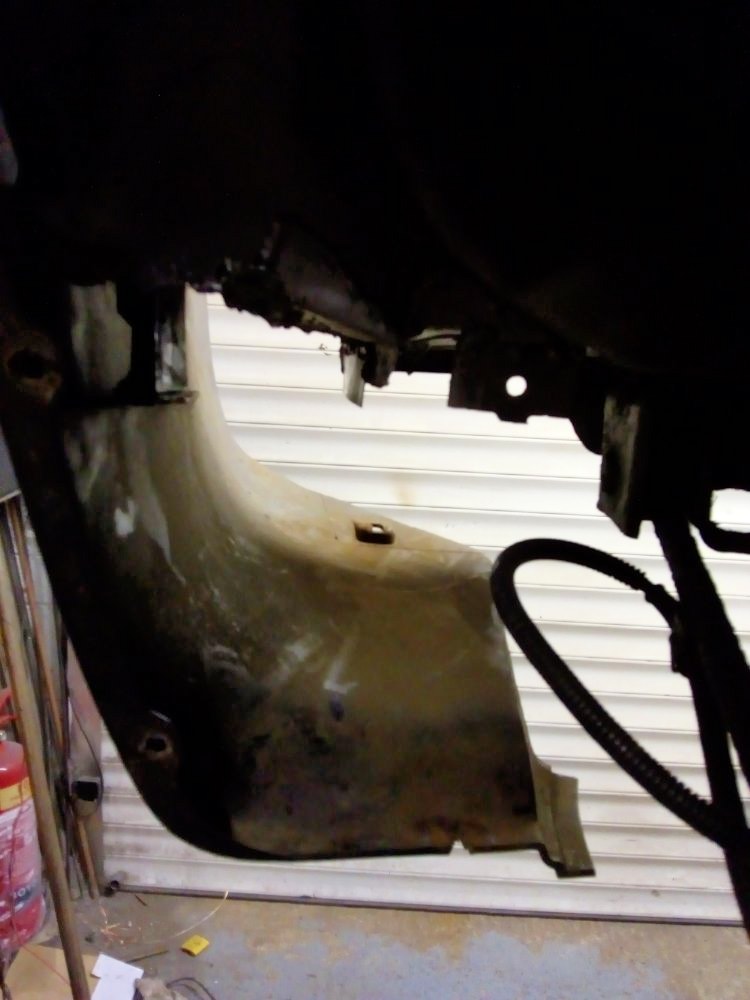 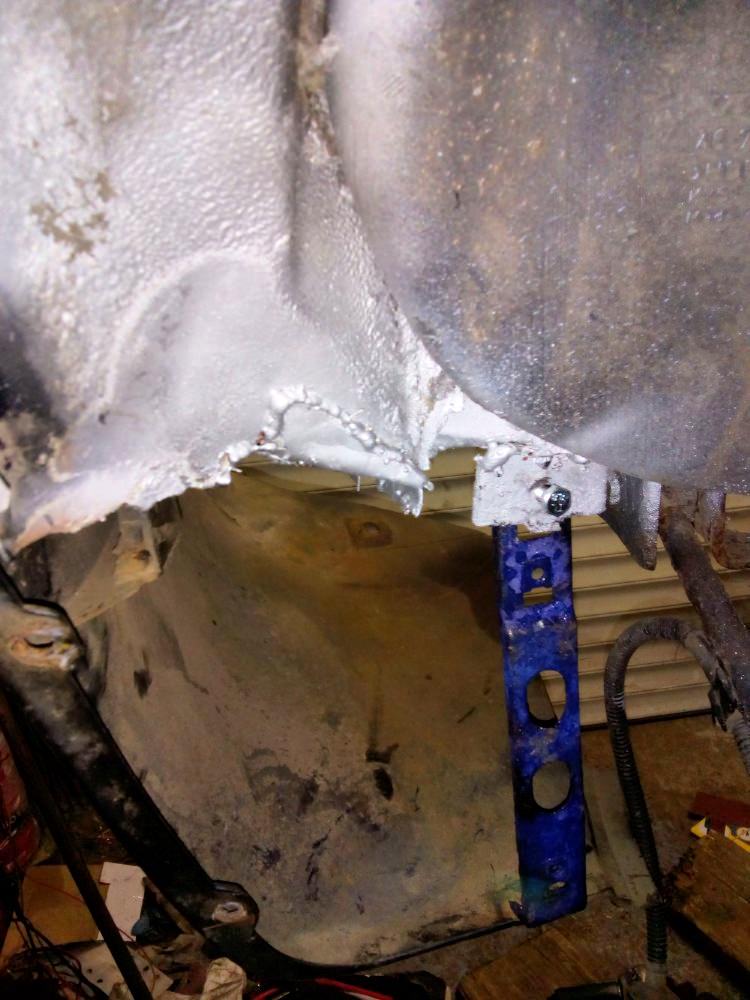 Thank you Arthuy, that's really helpful. I'll print off the photos and take them to the bodyshop.

The photo shows I fitted the bit back to front ( I cut off and re-fitted.

There is a little tag the sticks out to stop the bracket moving. This should point to the rear.
Top

The 340 side badges are a complete failure - ordered online from Volvo340onderdelen.nl as new old stock. The ones in their photo looked perfect but what I got is covered in scratches and scrapes so would need to be painted. Not only that, but they are bigger than the ones on the 480 so that piece of info is not correct. Maybe the early 480s had a bigger badge ? I have noticed that some 480s have their bonnet badge level with the centre of the aux. light, whilst others are further down. All ours are low except Sven's which is middle, maybe he's had his nosecone resprayed at some point and the bodyshop put it back in the wrong place.

Al's mudflap project is progressing nicely, he's finished a pair for Snazzy which I've just cleaned up. There was something scabby looking on them, no idea what and it resisted all sorts of cleaner (including Armour-all, cream cleaner and various spirits). In the end I resorted to black shoe polish which has made it look much better. Silver paint next. Rusty brackets went west for copying yesterday, and Junk has given up his bonnet badge - not perfect of course but in good enough condition not to re-paint which surprised me given the terrible state of his bodywork.
A front fog also went missing, but she had the old style ones as a result of Al hitting a pheasant some years ago. A rummage in the garage rafters produced a pair of the later ones, one perfect and one with both brackets broken. Al did the usual washer-glued-on-the-back, then had to open up the hole to make it a slot. I took over and moulded some Milliput onto the washer and built it up to roughly the same shape as the original bracket so it's got some re-inforcing. I've never know Milliput come detached from anything, including exhausts. The old fogs were so much better made - clips holding the glass onto rubber seals and much sturdier brackets but I totally prefer the look of the later ones. I was hoping the glass fronts would be interchangeable, but they aren't, the old ones are a tad smaller so later lenses won't fit.
We are getting there !
Last edited by dragonflyjewels on Wed Jun 10, 2020 5:19 pm, edited 1 time in total.
Sylvia

I have also encountered the mudflap brackets when doing my rear arch revival: You might have expected the nearside to be worse than the offside given its proximity to the gunk on the edge of the road, interestingly the condition of these reflect the difference in the condition of my arches pre-fix. Apparently the left side of car has had a much harder life!

Anyway, the mudflaps do attach to these brackets, but more importantly so does the rear arch liner bit. So with or without mudflaps, you'd need this bracket!
1992 Volvo 480 ES Limited Edition
2005 Renault Clio V6 255
1962 Land Rover Series II
Top

We've got our resident 3D printer gurus, it's a none structural, non-stressed part - Seems ideal!
Top

Just heard from the engineer. He cant reproduce them as he doesn't have a press to form the crank, but also thinks they are worth saving. Under all the rust they are still quite sturdy so he's blasted them ready patch the split in one and make a new section for the other.

Thanks for posting pics of yours 100, are yours welded on at the top ? There is no sign of weld on mine so bro was wondering if the top bit attached to something else that was welded. Jeff's crafty plan to try 3d printing wouldn't work well if welding is the only option

dragonflyjewels wrote: ↑
Tue Jun 16, 2020 7:46 am
Thanks for posting pics of yours 100, are yours welded on at the top ? There is no sign of weld on mine so bro was wondering if the top bit attached to something else that was welded. Jeff's crafty plan to try 3d printing wouldn't work well if welding is the only option

I'm not sure if they are welded, but however the bracket is fixed to the car it seems begin to peel off over time, some wiggling of the bracket would probably see it separate from the car! Which probably explains arthuy's images of them off the car. 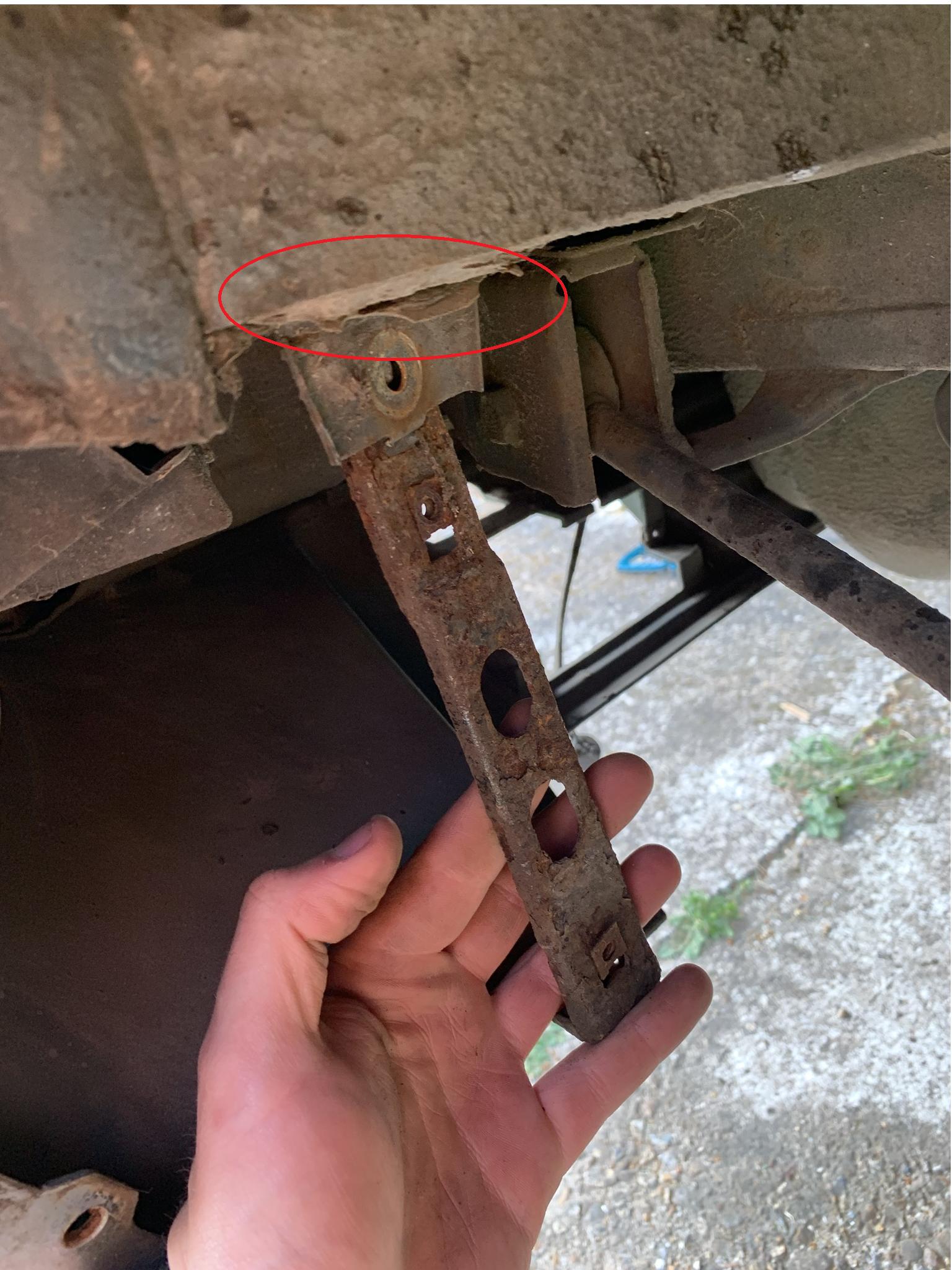 Well bro sent the brackets back looking like this:

When both the small pieces at the top were blasted they practically disintegrated so he didn't attempt to remake them as he had little idea what they should look like, or what shape they had to fit onto. Added to that there was no sign of them having been welded so he didn't even know how they would be attached. When we went over to the bodyshop today, I was told the whole of the underside has just been coated with 'something better than the original waxoyl' so welding is no longer an option without a large bonfire

Anyway, he's happy to 'sort something out' now he's got something decent to hang on there as well as pics showing exactly where they go. Also dropped off a pair of refurbed rear mudflaps and Junk's nose cone badge. Not much to do on her now, but the insurance work has flooded in so I'll probably have to go back to just being patient - damn ! I'm dying to have her back on the road

They will be able to work something it is a really simple piece.

Sort right angle at the top, captive nut and a tag going the opposite way from the lip to locate the strip. The original is strengthened by folding the edges of the metal.

You could rivet or bond something though it only needs a tack weld so easy to do.


I use the 'lightweight' builders ties, oK not SS but they are galvanised...

easy to bend and lots of holes ready drilled

or push the boat out for STAINLESS

https://www.screwfix.com/p/sabrefix-wal ... teel/56037
a tenner gets you enough to do a dozen 480 rear pairs?
ideal for the fleet owners?
Alan

Does any of your other 480 have the bracket in tact?

Well, we were there in Sven and the bodyshop guy had a feel behind the mudflaps, then announced that we had nothing one side and a stump the other..... I suspect when his turn comes to go in for restoration he's going to need rather a lot of welding. Lily's in the garage with rather a lot of stuff temporarily behind her, and Eva's away in storage. Both low mileage and garaged most of their lives so I'm hoping they are not so bad.
Sylvia

AT LAST ! Snazzy was transferred from the bodyshop to our repairman on Friday. Brake pipes have been fixed, service today, mot tomorrow...... just in time to tax for July ?

Passed the MoT, just a few bits of wiring to sort now....
Sylvia