The place where Volvo 480 fans come together
https://www.volvo-480-europe.org/forum/

He drove it for about 4 years, until it had a couple of issues and was laid up in a unit - where its been since.

James moved south and now needs to get rid of it - and i'm giving some consideration to its resurrection; and as such I went to visit the car... 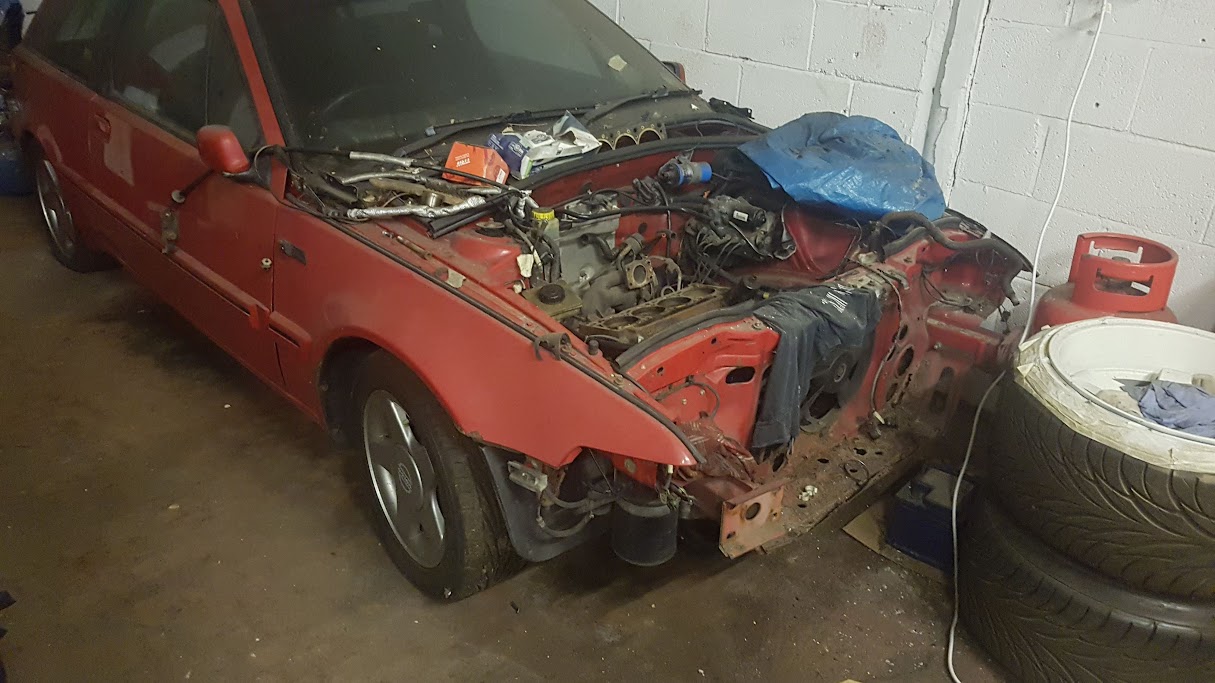 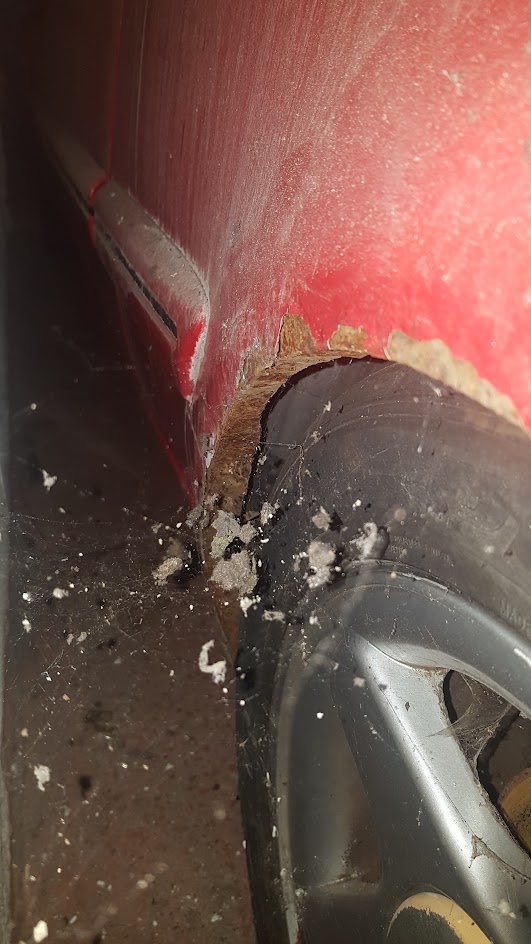 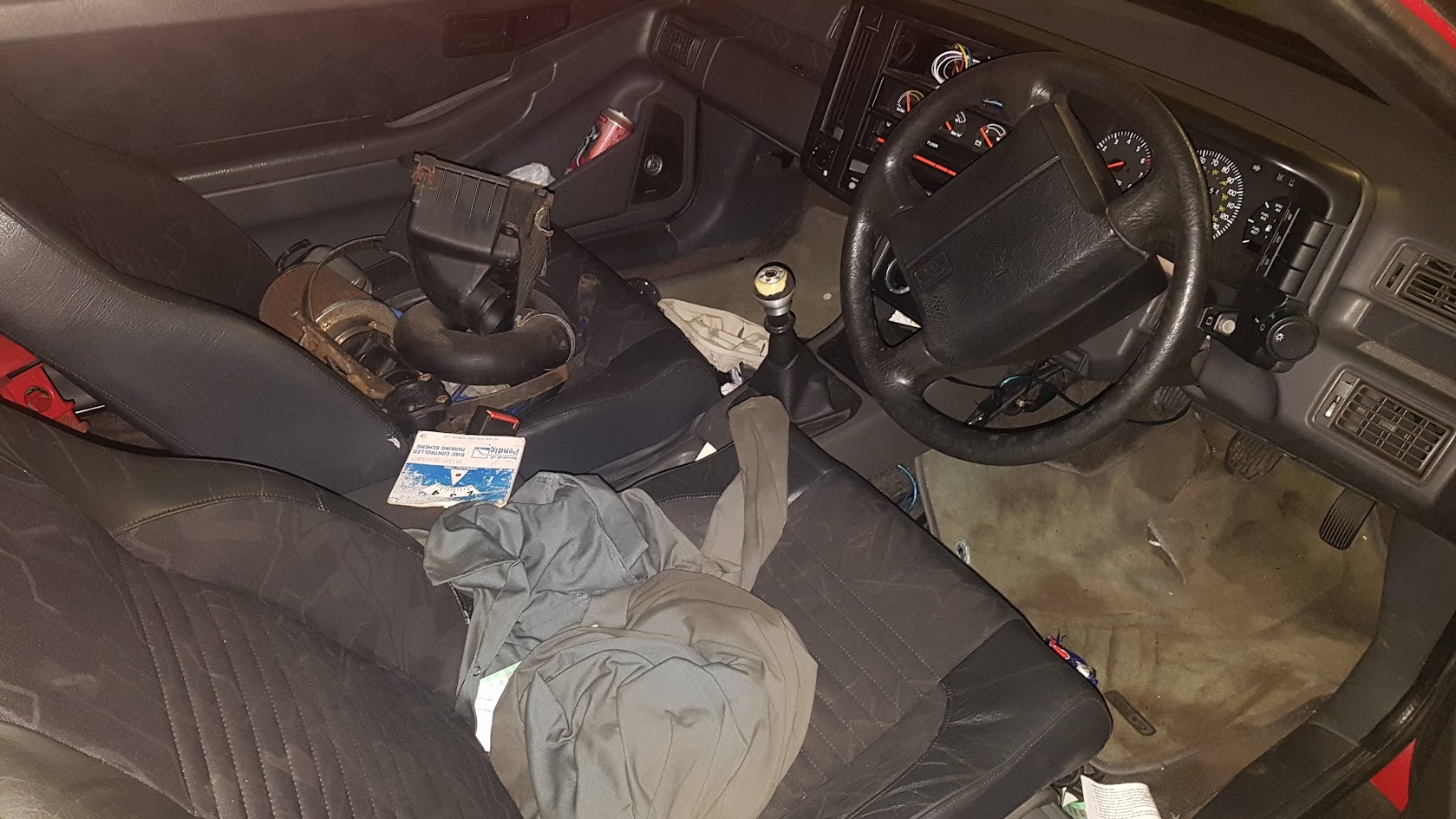 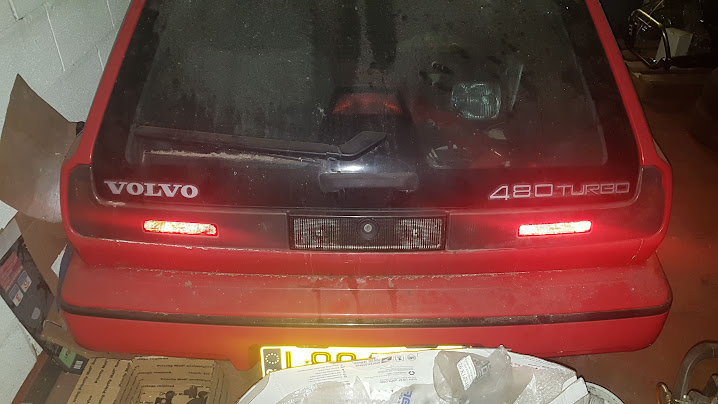 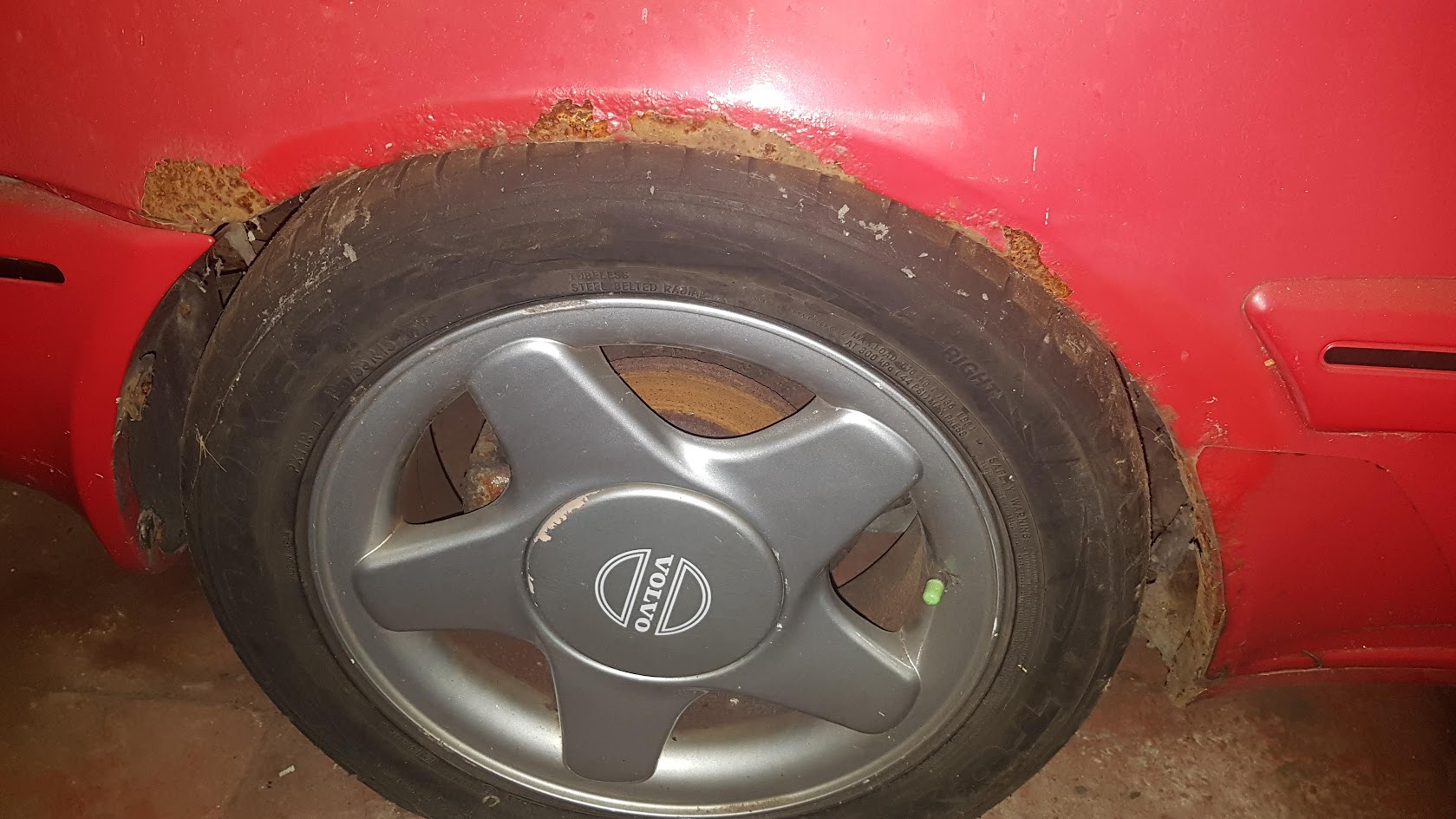 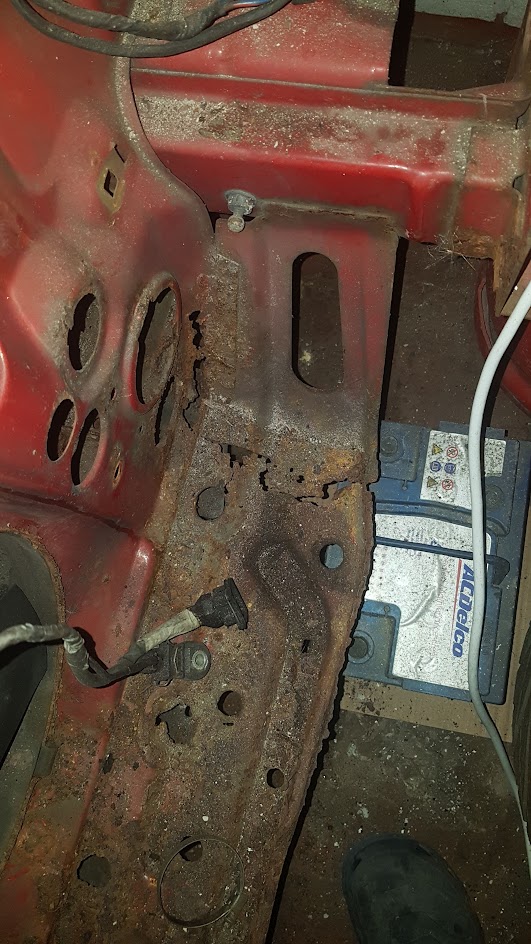 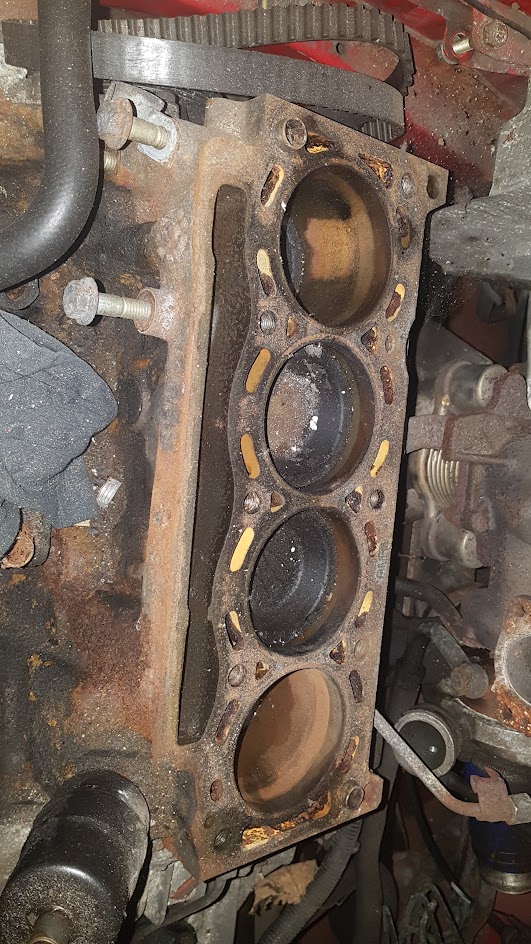 How do you feel about it? Are you leaning towards 'I loved that car, do it' or....'let's just buy another'.

by JohnTurbo
Can you see them now James?

The engine I can sort out. The interior isn't so bad.
The arches are nothing unusual for a 480 - I've seen worse, even 15 years ago.

The front panel is more worrying - as if the chassis displays a similar state of decay its dead.
James was thinking of a reshell even in 2013.
I guess I need to get it out of there and cleaned up, then take a look.

Its a shame the report on the TT you guys looked at was not better, I'd have been very tempted by that (at the lower price) if it was as clean underneeth as it was inside.

A weird thing has happened to me since I was 'here' last; back then there was no 480 except the Turbo to me. Celebs were lovely and all but they had the wrong engine.
Now I'm not fussed so much.
I think its because I have a couple of cars that are over 300bhp/tonne that box is checked. And also I'm getting old....

by jamescarruthers
I'm afraid not 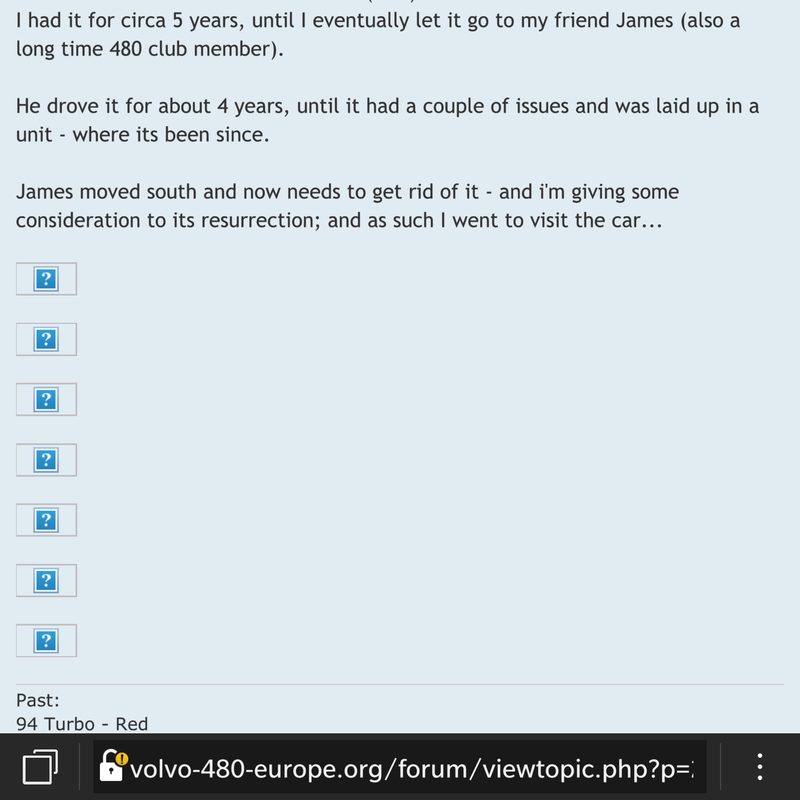 by JohnTurbo
Some photos from happier times:-
(Can you see these James? - Different linking method) 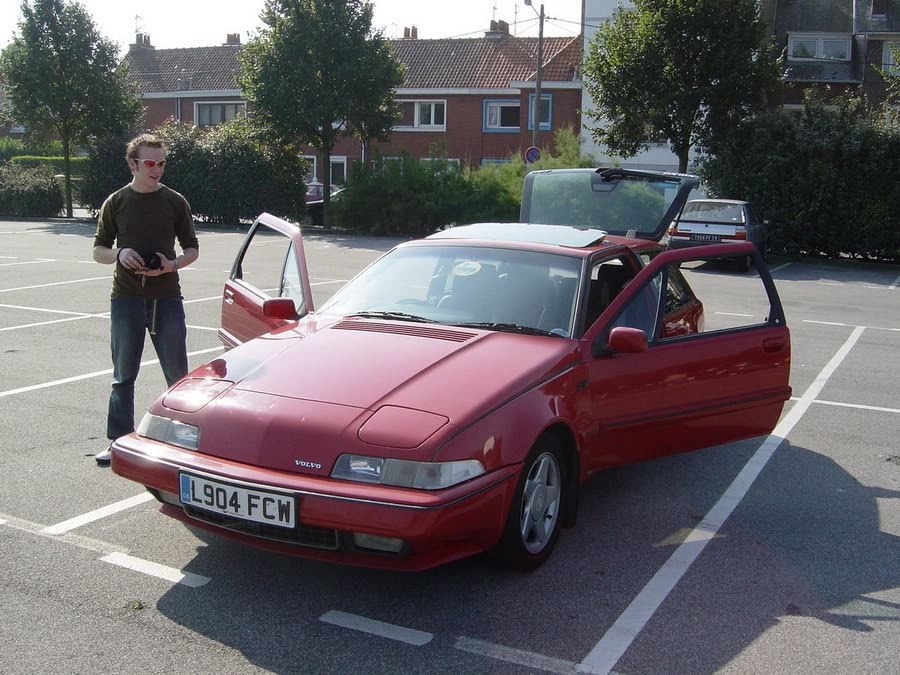 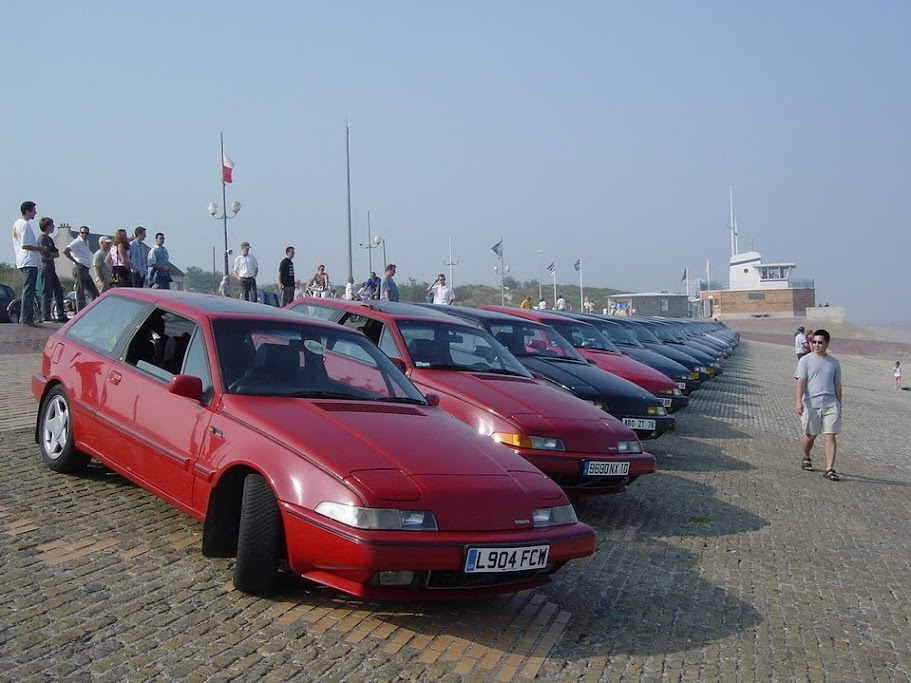 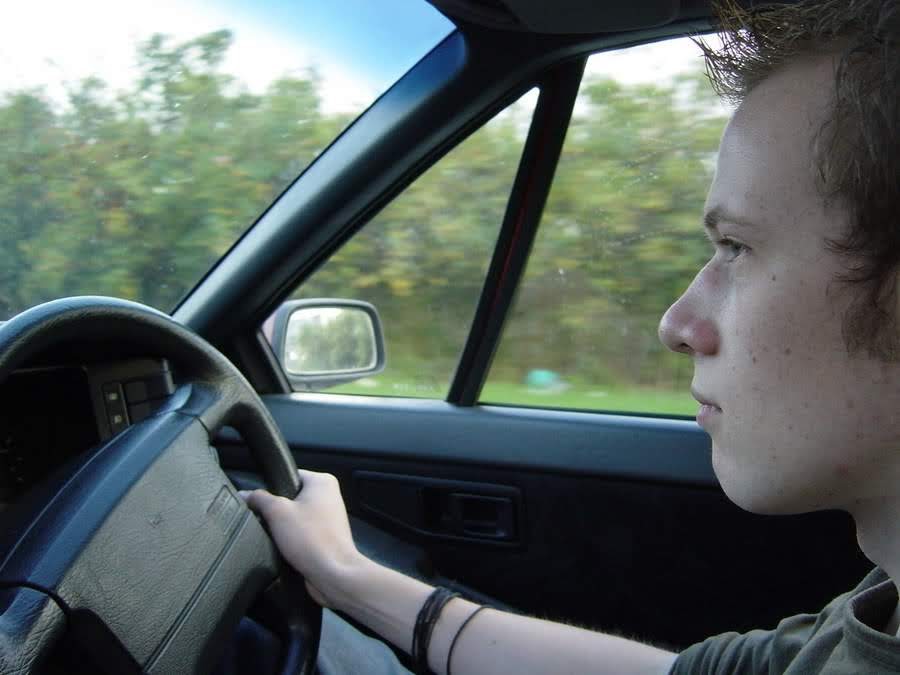 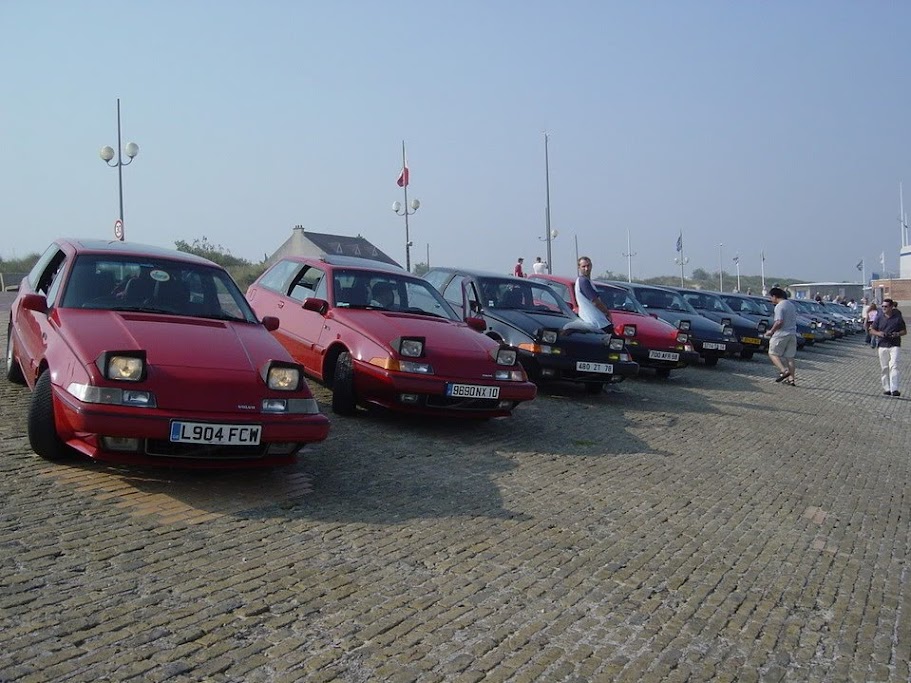 by jamescarruthers
I can see the later pictues

by brinkie
It is all a matter of how badly you want this particular car back on the road, or is it just that you want to drive a 480 again? Then you should take the unobtainium bits off. get a better car (with possible niggles and rust) and bring what's left to the scrapheap, because this one is really far gone. That is the short way round, the cheapest and fastest option.
If the long way round is what you prefer, you should go all the way. Strip the entire car and the engine, get rid of all the rust (there is a LOT more hidden than you could imagine), respray and rebuild everything. This can take years, but you'll end up with something that's going to stay in good condition for many years to come.
Good luck

by jamescarruthers
Whatever you did worked and I can see the pictures now. ‎

In looking through old pictures I found ones of Silver and Grey Turbos I scrapped that were much less rusty than poor FCW. - Which I guess makes your point!

Study it hard, because every single part you'll need will be unobtainium!

whilst not the greatest source of truth, howmanyleft.co.uk reckons there's a 162 480 turbos left in the uk.

so technically, they're becoming unobtainium too...

BUT. Alot of owners will sell/trade/barter etc parts if its for a good cause and not for someone going to waste the parts! so you could well be in luck that way of it if you really do want to return the car to its former glory to keep/enjoy

by Rachel
do it John, that would be such a happy ending/new beginning for it!

by dcwalker
I have to agree with the sentiments here, especially in the last two posts - go for it!

I think in your heart you want to; it'd be a serious challenge but so, so, worth it if the car could regain her former glory (she looks lovely in the old photos

); and I know that if one of my old 480s turned up again in whatever state, I'd desperately want to have her back again!

As has been said, for a good cause people on here are always ready to try to help with spares and encouragement.

by JohnTurbo
Spares should be less of an issue....

Theres actually a second 235 Red 2.0 up for grabs, and the balance of spares from a fully stripped THIRD 235 Red I gave James years back. Dunno how much of that he kept!

The 2.0 was in generally better condition back in the day and is complete bar a headlining.

by Murf
Was this the car that you converted to a Turbo?

I think you need to save it just for nostalgia and what it's history means to you. Any other car would be "just" a 480.

The front panel is a common/easy place to rot and doesn't necessarily mean the rest of the chassis has gone the same way.
All times are UTC
Page 1 of 1
Powered by phpBB® Forum Software © phpBB Limited
https://www.phpbb.com/