Everything that doesn't belong in the previous categories probably belongs here. Interiour (how are the seats mounted? how to remove the CEM?) and exteriour (how to replace the popup-lights shock absorbers or a door) are discussed here!

Working on my 1994 480ES and trying to track down a water leak that was particularly bad. I've now removed all of the rear trim, carpets, and part of the side trim panels so I can get a clear view of the window seals and the boot seals (Have also removed the headliner plastic guide/holder so the roof headliner is sagging down so I can see the metalwork at the rear).
Sure enough, it's the boot seal that's leaking, right around the wiring that leads into the boot.

Mine looks like it's been "fixed" or altered before as there is no rubber cover for the wiring, that looks long gone, so now onto the leak, even after holding wires out the way so they don't foul the rubber seal there still seems to be water leaking in.

The inside shows the wiring exposed: 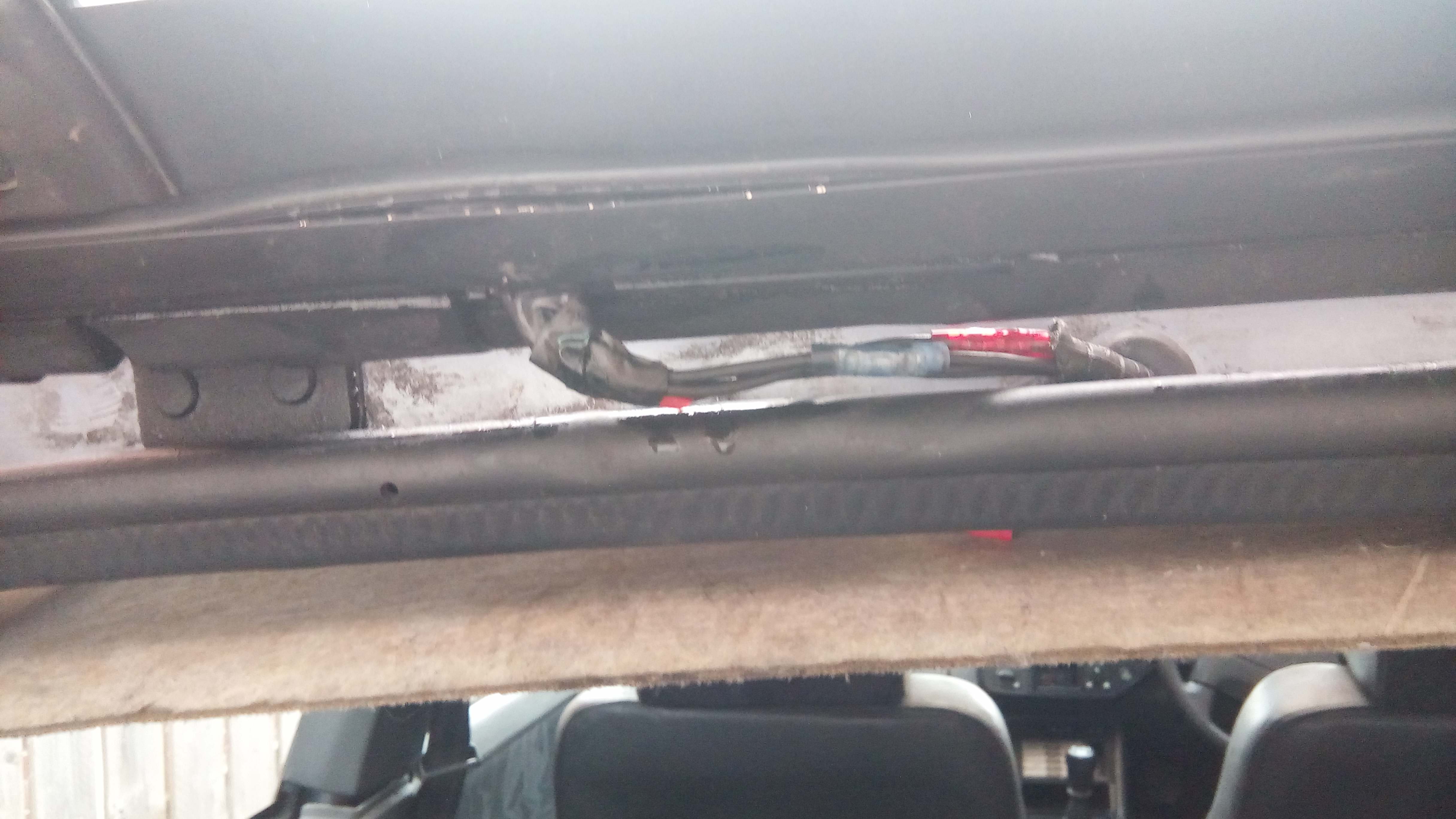 And when shut the boot shows the exposed wiring in the top channel: 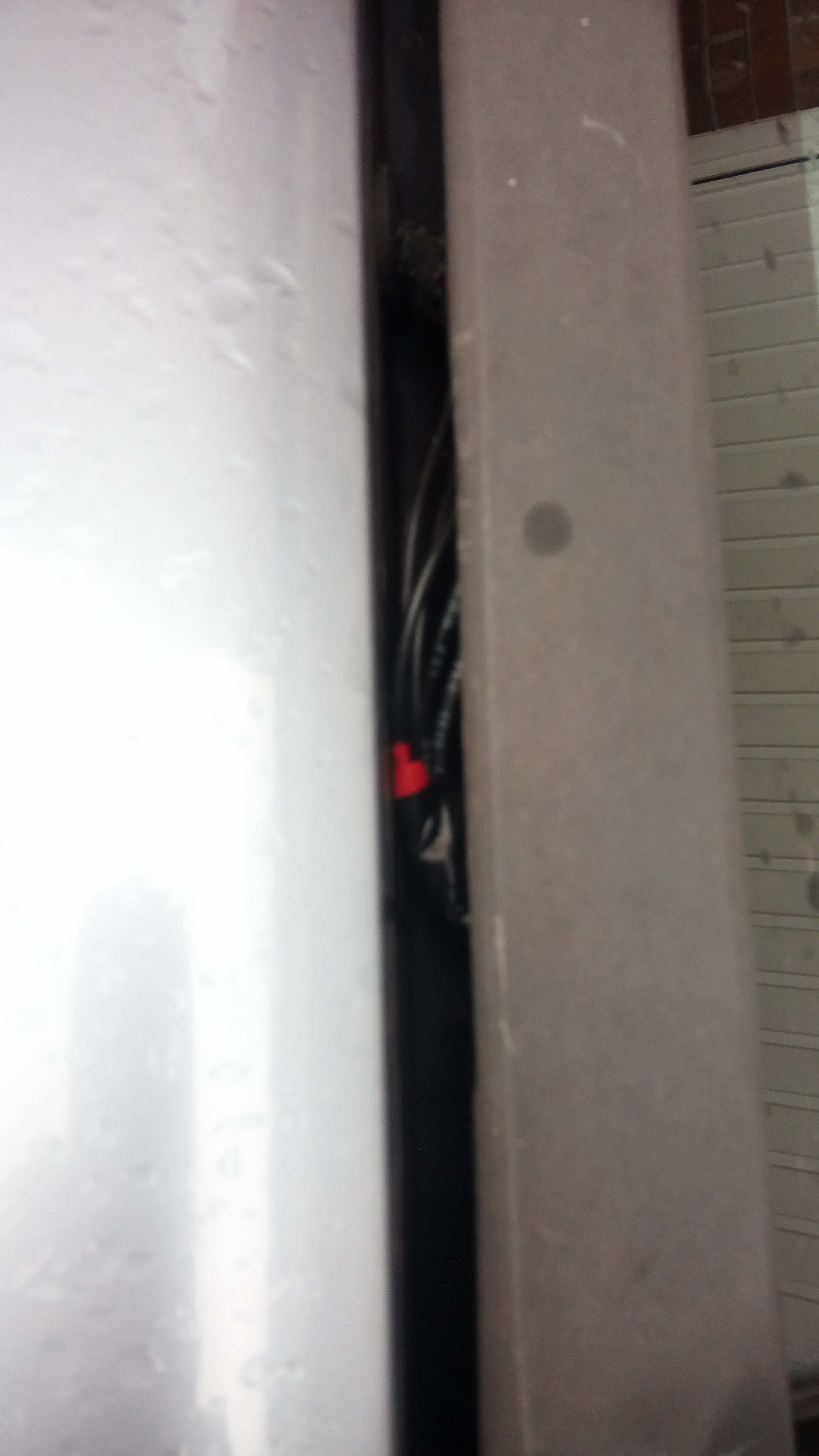 Pretty poor design when I look at how it works, but am I right in thinking I need to "pad" the existing seal out/replace it so it's got more push on it to create a better seal?
If so, then is replacing the seal an option (Quick search doesn't give exact replacements), and if not has anyone had any luck with 3rd party/compatible seals. I see another post/search throws up:
https://ebay.us/AnM0De
Large Car Boot Door Bonnet Rubber Edge Seal 34mm High x 13.2mm W #23 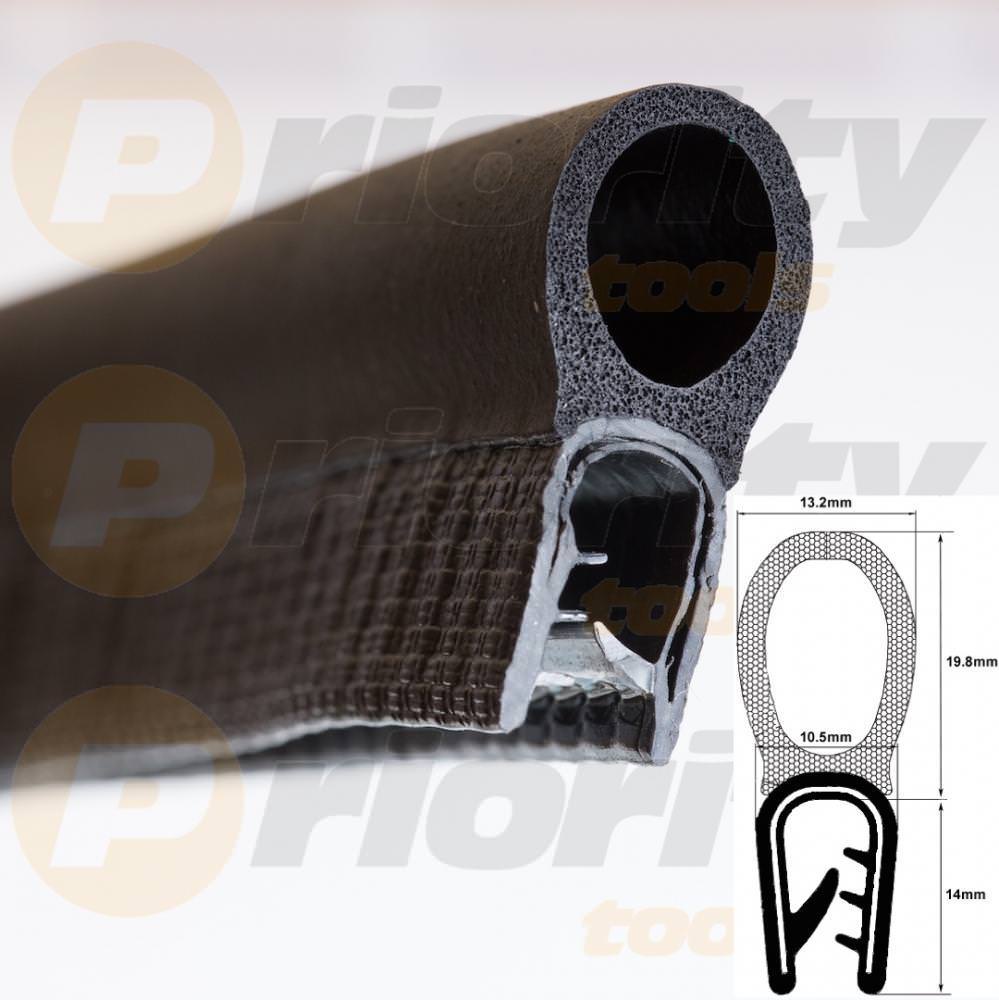 Which looks close to what I want, any opinions on it? It's sold by the metre so will go and measure and see what I need.

Otherwise, any suggestions to getting this watertight again?

The seal itself looks ok to me, wet but that will be water dripping on it as you open the tailgate. The more likely problem is the exposed wires, unless the wires are getting trapped under the seal as well.

It is as you say a bad design. Do a search and you will find it has been talked about before and there are pictures showing repairs and where the water goes.

Basically the water gets into the roof space as the wires are not sealed in rubber and is then channelled to the boot. The water also goes in the other direction into the tailgate which also ends up in the boot.

We were recommended to fit 440 seals, they have an extra lip not present on the 480 ones. All our 480s have them now, and no more leaks. They are too long, but easy enough to cut down.
Sylvia

That's a useful bit of info to have - thanks

So I think I've solved this in two stages. First was a new boot seal. I ordered a seal from ebay:
http://www.ebay.co.uk/itm/121741575480
4Metres which grips pretty good and has sealed the boot nicely. The top cable/entry is still a problem so I'm on the lookout for a bit of replacement foam to create a new rubber/foam fitting for this.

For the slight leak around the lights I'm going to use silicone and seal them in, not ideal but might need to go with this option as the rubber around them is showing age decay problems, so think sealing it with silicone should do the job and hopefully that's the end of my leaking boot!
Thanks for all your help! - Andy
Volvo480 ES 2.0 petrol - 1994 (UK RHD L-reg)
Top

If you can get the lifts out with out breaking them (i.e. They haven't been silicone in in the past) then you can get new seals from Joep Vrijlingin NL. If interested, PM me and I'll send you his email address and full price list to your email address.  They are 20 EUR, plus postage.

Thanks James, yes I did ponder this for quite a while, however with the weather being as bad and seeing my boot/inside getting soaked I went for the slightly drastic option with silicone. The seals weren't great, but to me the only reason I'd ever need them out again would be if they were damaged so I'm going to risk the hassle. So far that's sealed them up and no rain coming in that way.

I'm now still getting some rain coming in from the top of the boot seal despite having a new seal on it, so again need to look into this.
Thanks for all your help! - Andy
Volvo480 ES 2.0 petrol - 1994 (UK RHD L-reg)
Top

Glad you've sorted it, at the lights anyway.‎

Now you've got the silicone out, take the tailgate hinge screws out, degrease/clean and put back in wet with sealant. ‎

Interesting point on the hinge screws, I've not looked closely at those but will take a look and see if they're causing water to seep through.

The wiring is the current pain, and yes re-routing it inside the car certainly sounds a better idea as I think that's my last point of problem, not quite "genuine" but sounds a better idea to go inside rather than out, will take a look later and see how feasible it is. Thanks for the tip!

ebay - from cars being broken, hopefully there's still some about
Sylvia

used them previously for seals etc for the SS1, Regal & Se5a

Is the 440 seal different/ better than the 480 seals or would 480 seals in good condition be worth getting, I have a leak but can’t work out where it’s coming in, my lights have been sealed by the previous owners, I’ve made a seal for the Ariel. My latest thought is it’s going in underneath the seal?
1995 -storm grey Celebration - 108
Top

Sorry just read above and 440 appear to have a extra bit the 480 ones don’t have, might as well stick with the ones I have for the moment
1995 -storm grey Celebration - 108
Top

I also have a small issue with moisture in the boot. I am not sure if the seal is the main reason, but after 25 years, it's pretty worn out and not too flexible. Moreover, whenever it rains and I open the boot, there is some water that drips from the seal straight onto my luggage.

Today I installed a new aftermarket seal that has a small ridge. Hopefully, this will prevent that dripping. Also, the new seal is much more flexible, stays in place much better and has an extra lip (can be seen on the left hand side in the next photo) that should prevent any water from getting under it: 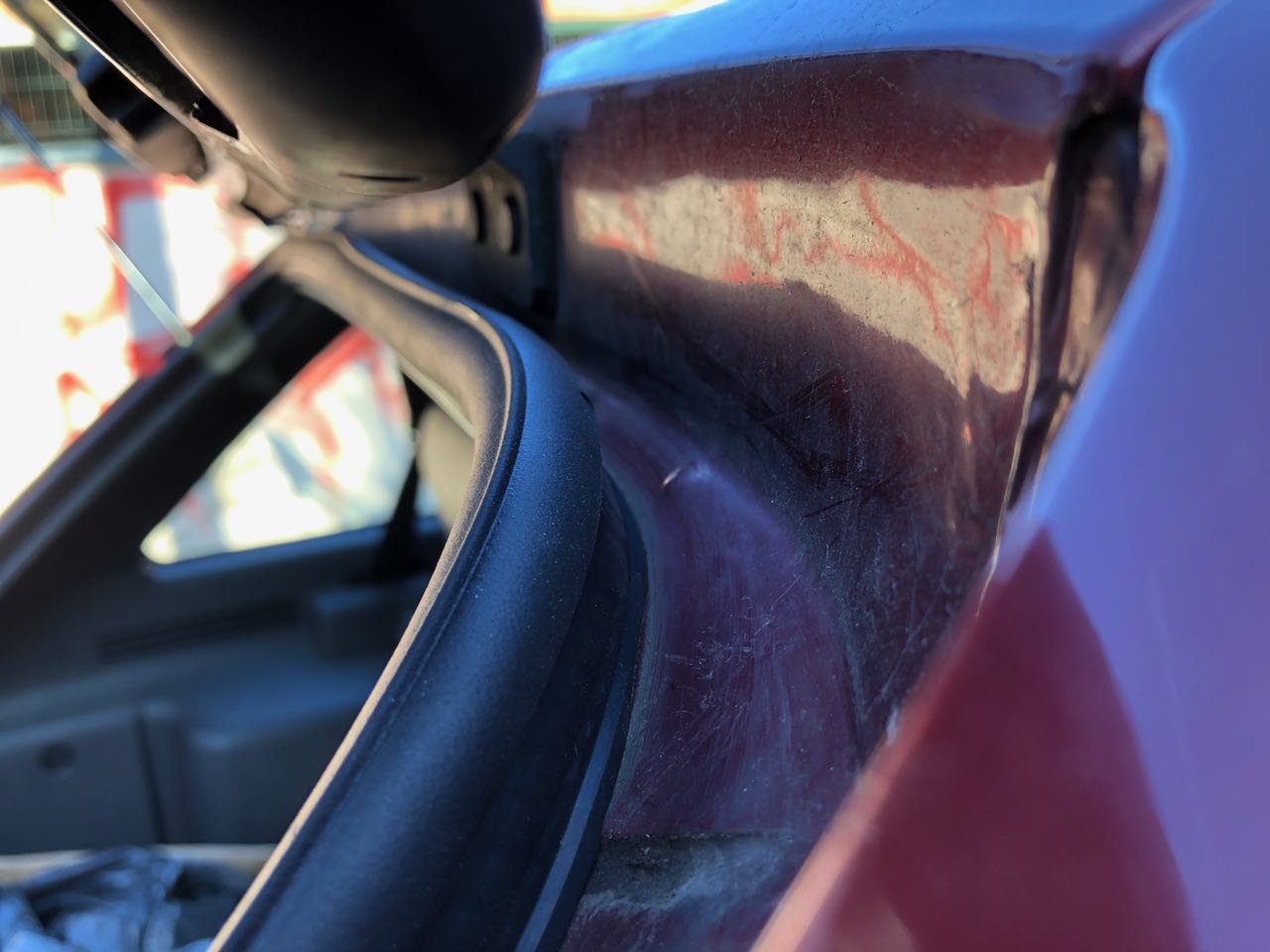 The only problem with this generic seal is that it is slightly smaller that the original one... so now I am waiting for a rainy day to find out if is not too small 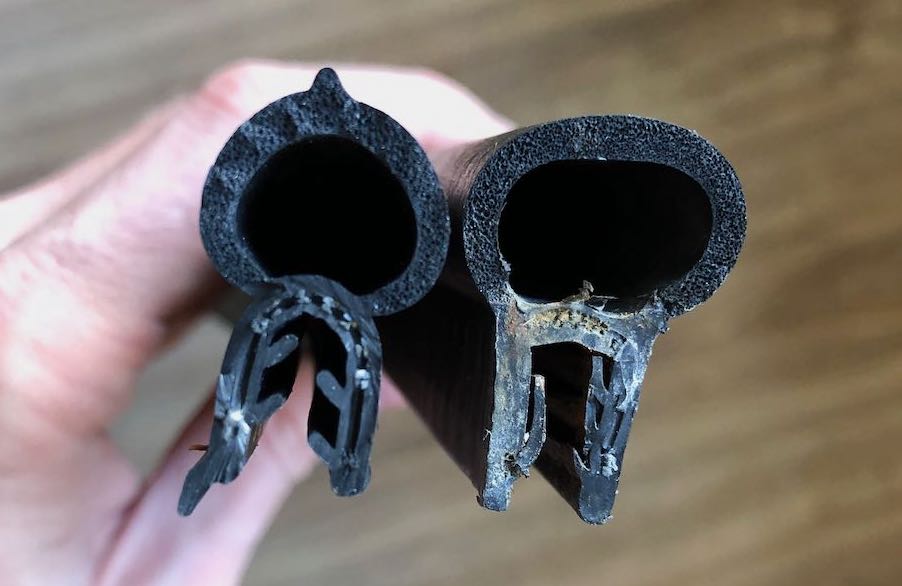 This is the profile of the 440/460 boot seals - the extra lip on the top is longer, it also has a circular section at the bottom. I also had the hinges on my 2ltr's hatch adjusted to tighten it slightly - tricky to get it right, too much and it won't close, too little and it leaks, so a lot of trial and error needed.
Sylvia

Just another thought - maybe a later Volvo has a suitable seal, perhaps the C30 ? Rachel is the person to answer this as she has both a C30 and 480.
Sylvia