Does your 480 have tracking-problems? Does your car pull to one side? Or is your steering wheel vibrating? Read the posts in this category to find out what's going on.

Anyone have any options to get replacements?

I guess custom made is the only option now.

Is this on the GT? If so, you’re going to struggle getting a S/h one as they were only fitted on gt/celeb as the ac models had different pipework.
Have found a couple of places that will remake them but your getting close to £250
Top

Thanks Jeff. Yes for the GT. I assumed that the AC would make a difference but not in a good way!

If you have any sources for replacements I would appreciate a pointer.

Thanks for your damper info. on some other posts. Managed to find some but it's not been easy. Looks like Bilstein has discontinued the B4s now.
1994 480GT - arrived!!
XC60 and XC70 for the daily grind.
C70 Coupé Convertible for the sunny days. Should sell it but can't!
Top

Same with most 480 problems - not available new and all the cars sat in breakers have the same issue!

Not for the 480, but for the Mk2, I had custom pipes made at my local hydraulics shop. This was Kemptson Radiators near Bedford. 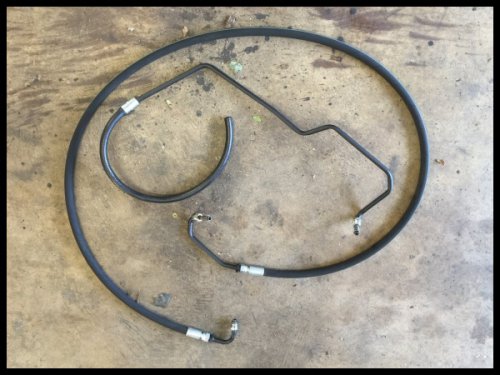 They used what they could of the tails, and converted to flexi... 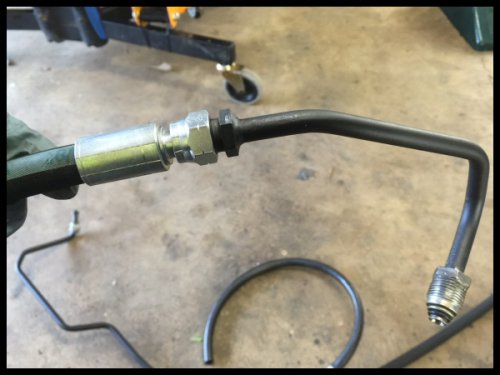 I chose the custom route here because everything on the hose, the rubber, the unions, the pipe, were all shot.

The 480 was different, as the rubber was fine. I just had excessive corrosion down by the front crossmember... I chose to fix myself by cutting and joining with over-sleeving as they are just steel (using a mig). Chuck any garage beer money and they can sort this if they know how to weld.

I also felt more comfortable to weld repair as it was just the return line - they run at much lower pressures. Thankfully my main pressure pipes were fine due to the engine leaking oil on them for 25 years!

The return line has the wiggly oil cooler section (pictured below). It is probably this that has rotted out as its so vulnerable to forward facing road salt & dirt. Everyone normally says "just go to Pirtek". However, my branch (Peterborough) is a mixed bag. One guy was really helpful and custom made my turbo oil feed pipe. Another staff member just wasn't interested in my 480 PAS pipes; another contributory factor to me welding (that and it being low pressure return only).

Not all pas pipes are the same due to a/c and model years. Sorry if my pics don’t match yours.

I'm thinking of removing and getting a local hydraulic shop for fittings.
sadly the spare rack I have has different fittings

real bummer is that I have BOTH the fitting(s) for rack end with long flexible and the steel tube at pump end, just need a coupling to go from the flexible to hard pipe to make a COMPLETE pressure pipe

PS not sure if any real value of the 'cooler' section if it wasn't there on early cars, also ABZ is not exactly 'the hottest place in UK'

A couple of mech. mates have recommended hosequip in Colchester just down the road from me.

I'll give them a shout and take it from there.

Return to “Wheel suspension and Steering (60)”