From CEM to VEM, from LED to lightbulb and more. If you have an electrical problem, like a broken info-centre, search for answers in this category. This is also the place to be when you expect the problem to be of an electrical nature...

And the verdict? I think it's ECU.

I took the coil master lead, connected a spark plug to it and ground and turned over, no spark at all, so nothing there. I then took the coil off, tested voltage supply to the two supply pins and got 12v on ignition (via the jumpered relay that also runs the fuel pump),
I then looked at the signal wire (central pin/connector) which is the supply signal from the ECU. This should be a low voltage (up to 5v) signal as the ECU signals the spark, I'm getting under 0.1 volts on this when cranking. Now even given this is a pulsating signal I'd expect my meter to spot better than that.
I then tried the LED test, so a signal LED between the ECU signal wire and ground, no flicker nothing at all.

I'm thinking this is my issue, the ECU is knackered, so now I'm going to take it apart and reflow as much as I can in the hope I can bring it back to life. Otherwise I'm on the lookout for a Siemens B20F ECU.
Thanks for all your help! - Andy
Volvo480 ES 2.0 petrol - 1994 (UK RHD L-reg)
Top

Isn’t cranna21 breaking one at the moment?
Top

I reckon I've found the problem. Popped open the ECU and on closer inspection, I see burnt tracks: 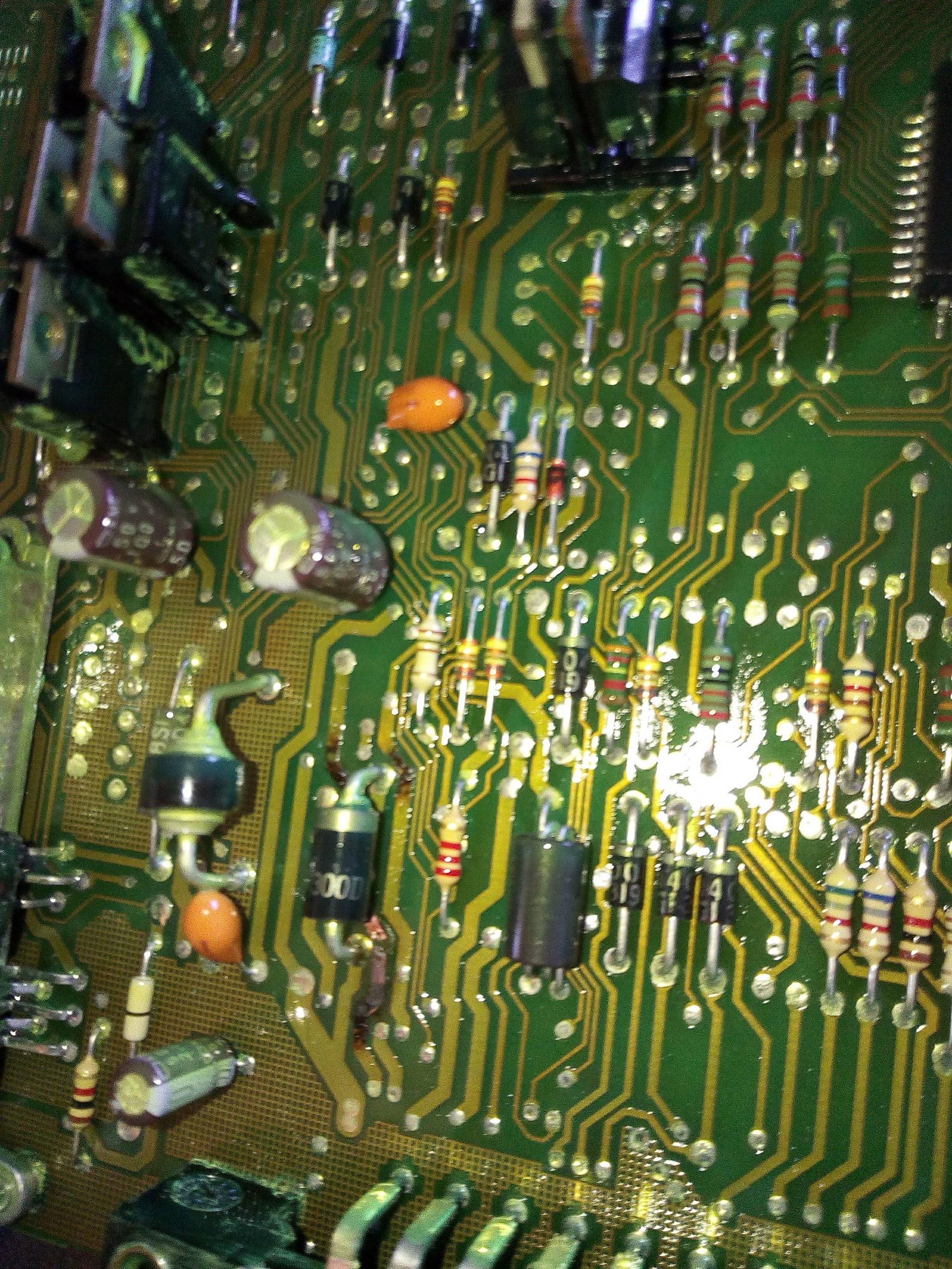 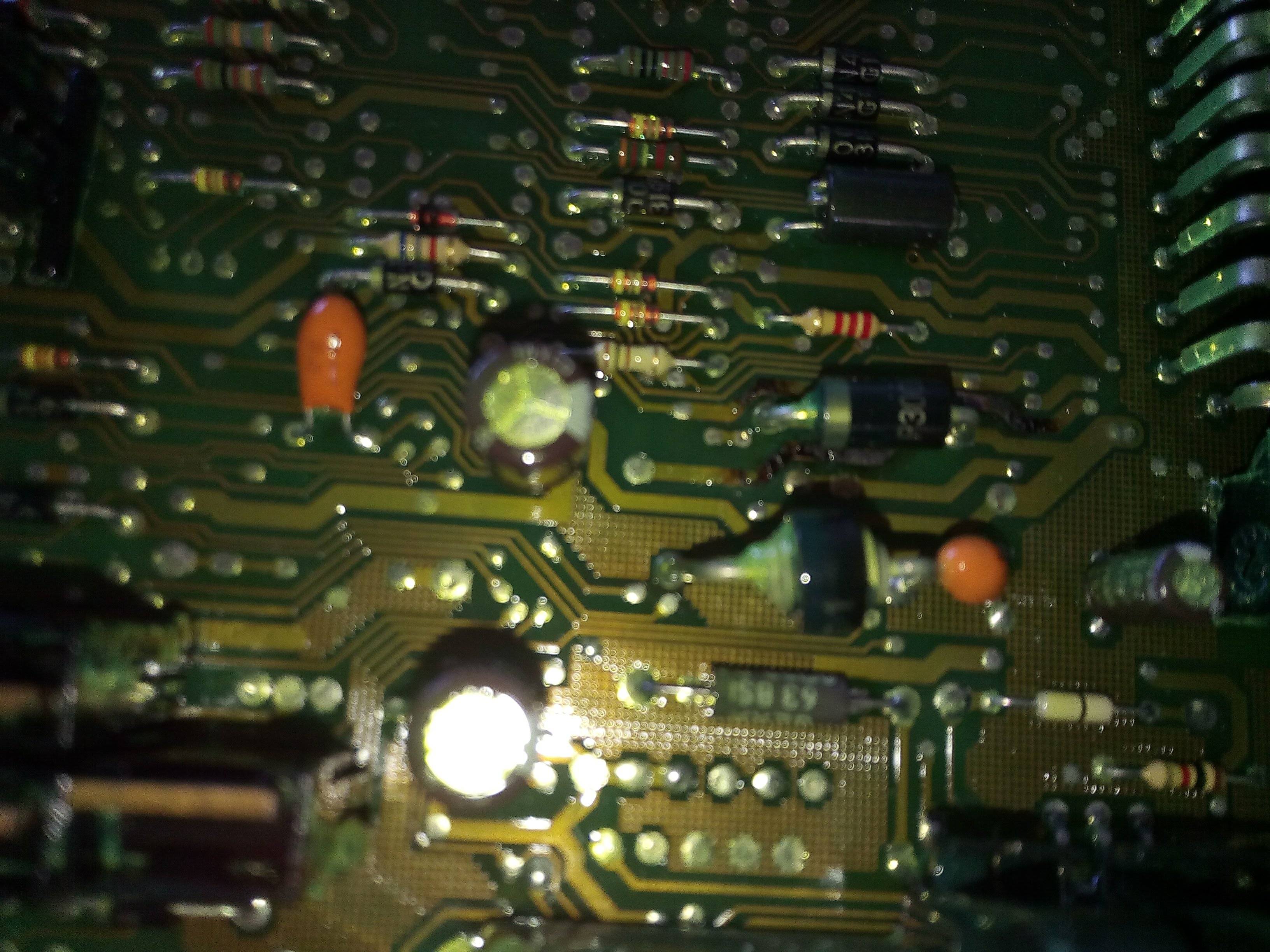 Possibly difficult to see on the photo but under the diode the trace has burnt and crisped up, I'd expect this is the source of all my woes. I've done quite a bit of electronics repairs so I'm going to try bridging the traces with a piece of wire soldered on, see if this helps, but if that trace has burnt up like that it's probably not done the ECU much good, so I suspect it's gone.

Aye, I've replied to him on FB asking how much for the ECU if he decides to sell it separately. I think he wants to ideally sell it with the engine as a whole working unit.
Thanks for all your help! - Andy
Volvo480 ES 2.0 petrol - 1994 (UK RHD L-reg)
Top

Have now soldered a jumper wire between the burnt traces, and no difference. Relays still clack and no spark generated, my suspicion is it's damaged other components that aren't visible, or it's a multilayer PCB (Difficult to tell held up to the light) and other traces have been damaged.

andyb2000 wrote: ↑
Wed Jul 03, 2019 7:46 pm
Have now soldered a jumper wire between the burnt traces, and no difference. Relays still clack and no spark generated, my suspicion is it's damaged other components that aren't visible, or it's a multilayer PCB (Difficult to tell held up to the light) and other traces have been damaged.

Defo on the lookout for a replacement ECU now folks.

doubt if it is 'multi layered' as more than likely too old ?

issue is 'what caused the failure'

fuses are ten a penny, ECU are not

Don't know if the likes of Brinkie has any knowledge of these?

the 'clacking relays' might be cause or effect?
Alan

Yeah, same thoughts Alan.
I'd also agree it's unlikely to be multilayer board at that age, I've put it on a lightboard and cannot see any other traces, so that looks unlikely now.

My thoughts on the relay clacking? It's because the ECU has lost it's mind and is triggering it's outputs/signals at random. Probably because one of the chips or the transistors are burnt and jittering with the voltage through them, certainly the signal wire to the coil gives a change in state between ignition off and trying to start but the voltage is millivolts, suggesting failed transistors. I'm not sure but I might try to replace them as they're relatively easily swapped out.

The pin that was toast, pin 19 is the ignition supply (TO ECU)/relay wire (one of the two under dash). Now working back over the original problem based on the seller was a knackered fuel pump. The fuel pump is switched via a relay so doubt that in itself would cause the problem. So the fuel pump either died and caused an issue, or died because the relays were clacking like crazy and the pump didn't like the constant on/off spikes and bit the dust.

Looking at the trace on the board, it's high current that caused the trace to go bad and melt, so it suggests a fault to ground somewhere. Testing with the meter didn't show anything up obvious, and at least at the moment I'm not getting any shorts to ground.
Partly though I'm wondering why a fuse didn't go, as the supply to the ECU and relays are fused, so I'm going to compare all the fused to the supposed values, see if somebody swapped a fuse somewhere and got the ratings mixed up.

I'm starting to document it all on my YouTube channel (https://www.youtube.com/andybrown21/), second part probably uploads tomorrow with the more in depth bit about what I find with the ignition coil, and 3rd video will be focussed on the ECU itself I think.

Thanks everyone for their input, it's most valuable

You could try BBA reman and see if they can repair.

Has there been any relays swapped about recently or did the car ever run?

The 480 relays are the type that arent common (type A and B look the same but different pin out). So it is possible to fit the wrong type and cause damage.

I would mark up the relays, then remove them all and start refitting one at a time.

I did post a while back the correct relays if you have a look.
Top

Good news everyone!
As you may have seen on my youtube, I got the replacement ECU, tested fused, grounds, etc, and checked relays. Powered up with new ECU and it fired into life

It started first go, and runs very smoothly, so I'm over the moon! Now onto getting the rest of it sorted and back on the road.

Thank you so much to everyone who has helped diagnose, advise and help so far, it looks like this problem was down to the burnt trace on the ECU motherboard, and as others suggested earlier, my guess is somebody pushed a relay in wrongly and caused a spike (probably the fuel pump) through the ECU itself.
Thanks for all your help! - Andy
Volvo480 ES 2.0 petrol - 1994 (UK RHD L-reg)
Top

was only watching this last night!